Parliament Gives Nod To Bifurcation Of Jammu And Kashmir, Abrogation Of Article 370

The resolution was passed by Lok Sabha with 351 members in support and 72 against it, while one member abstained. 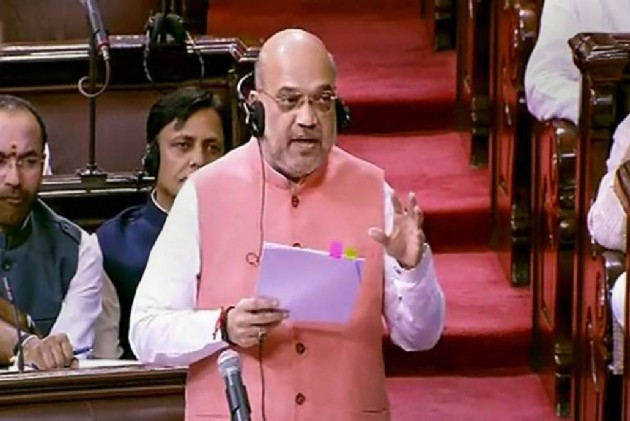 Parliament on Tuesday approved a resolution abrogating special status to Jammu and Kashmir under Article 370 of the Constitution and a bill for splitting the state into two Union Territories.

The resolution was passed by Lok Sabha with 351 members voting in its support and 72 against it, while one member abstained.

The bill to create two UTs -- Jammu and Kashmir, and Ladakh -- was passed in the House by 370 votes in favour and 70 against.

Voices Of Dissent Within Congress Over Article 370, J&K Bifurcation

No Talks With Hurriyat, Will Continue To Claim PoK: Amit Shah in Lok Sabha

The resolution and the bill were approved by Rajya Sabha on Monday.

Replying to the debate on the resolution for abrogating some provisions of Article 370 and the Jammu and Kashmir Reorganisation Bill 2019, Home Minister Amit Shah said that India will continue to claim the territories of Jammu and Kashmir under the occupation of Pakistan and ruled out any talks with separatist amalgam Hurriyat Conference.

The government on Monday revoked some provisions of Article 370 to take away Jammu and Kashmir's special status and proposed bifurcation of the state into Union Territories of Jammu and Kashmir, and Ladakh, a bold and far-reaching decision that seeks to redraw the map and future of a region at the centre of protracted militancy.

Shah also said the Modi government will have no hesitation in restoring statehood to Jammu and Kashmir when normalcy returns.

"India will continue to claim Pakistan-occupied Kashmir," he said.

It is a historic day for the country today when Parliament has finally abrogated the Article 370 and passed the bills empowering the people of Jammu, Kashmir & Ladkah. It marks a new beginning in our history

I congratulate PM @narendramodi ji for his bold & courageous leadership

Shah said Article 370 was creating doubts over Jammu and Kashmir's relations with India.

He also strongly refuted the suggestion that abrogation of Article 370 was "communal agenda" and said the provision in the Constitution was discriminatory and against the
minorities, women and the welfare of the people.

The home minister also ruled out talks with the Hurriyat Conference.

"We don't want to talk to Hurriyat, but we ready to speak to people of Kashmir...," he said.

Shah said over 41,500 people were killed in Jammu and Kashmir due to militancy since 1989 and blamed the Article 370 and Article 35A for the problem.

Defending the government's action to put restrictions in Kashmir Valley in the last two days, the home minister said law and order situation there has not deteriorated and whatever actions have been taken were all precautionary.

Shah also withdrew the Jammu and Kashmir Reservation (2nd Amendment) Bill, 2019, saying that the clauses incorporated in the legislation will automatically come into effect in the two new Union Territories.

The Bill will also be withdrawn from Rajya Sabha.

Meanwhile, PM Modi hailed as "momentous" passage of bills in Parliament on J&K, saying together "we will fulfil the dreams of 130 crore Indians".

A momentous occasion in our Parliamentary democracy, where landmark bills pertaining to Jammu and Kashmir have been passed with overwhelming support!

"Together we are, together we shall rise and together we will fulfil the dreams of 130 crore Indians! A momentous occasion in our Parliamentary democracy, where landmark bills pertaining to Jammu and Kashmir have been passed with overwhelming support!" he said in a series of tweets soon after the Lok Sabha passed the bills.