Union Minister Prakash Javadekar said that before the Modi government came to power in 2014, the country used to witness bomb blasts in various cities on a regular basis. 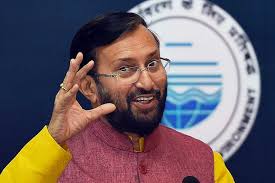 Union minister Prakash Javadekar on Saturday said that not a single bomb blast had taken place in the country in the last six years, thanks to the strong security measures taken by the Narendra Modi government.

Javadekar was speaking at a function to mark the 'Jan Aushadhi Divas' at the B J Medical College here.

In his speech, Javadekar cited various schemes related to healthcare and said that providing affordable healthcare facilities for the poor is the 'mantra' adopted by the PM.

"Various schemes and efforts taken by Modiji such as lowering the rates of medicines, stents and implants, setting up Janaushadhi shops, Ayushman Bharat scheme and promoting Yoga and Fit India Movement to keep the ailments at bay, shows his concern for the poor," the Information and Broadcasting Minister said.

He also said that before the Modi government came to power in 2014, the country used to witness bomb blasts in various cities on a regular basis.

"What we had experienced for 10-15 years (before Modi government came to power)? We saw bomb blasts taking place in Pune, Vadodara, Ahmedabad, Delhi and Mumbai. Every eight to ten days, blasts used to happen and people used to get killed. But in the last six years, not a single incident of blast has taken place.

"This has not happened just like that but due to some strong measures undertaken by the PM to ensure the safety and security in the country," Javadekar added.

Talking about the Jan Aushadhi Shops, the minister said more than 6000 such shops are being set up and 2-3 lakh people are getting the benefitted everyday.

"As people are getting medicines at affordable and cheaper rates, such shops should be promoted," he said.

Javadekar also lauded the Centre's initiatives to make the country open defecation free and construct toilets. "The United Nations has appreciated the efforts," he added.