Tihar Jail authorities had earlier told the court that since only one convict's plea is pending, other convicts can be hanged on February 1 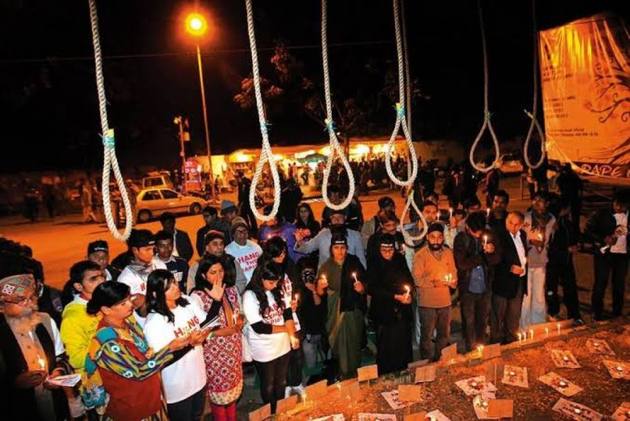 The four death row convicts in the Nirbhaya gang rape and murder case will not be hanged on Saturday morning as a Delhi court on Friday postponed the execution of their black warrants till further order.

Additional Sessions Judge Dharmender Rana passed the order on the plea by the convicts seeking adjournment of the executions "sine die" (with no appointed date for resumption).

Also Read: No Hanging On Feb 1

Advocate A P Singh, the counsel for the three convicts -- Pawan, Vinay and Akshay -- had urged the court to adjourn the matter "sine die" saying their legal remedies were yet to be exhausted.

The Tihar jail authorities challenged their application saying it was not maintainable and the death row convicts can be hanged separately.

The argument of the Tihar jail authorities was however not accepted by the court.

The convicts' lawyer argued that rules dictate that when one convict's plea is pending the others cannot be hanged.

The judge noted in the order that if an appeal or an application is made by only one convict, the execution of sentence shall be postponed in the case of co-convicts also.

The judge said: "Without commenting upon the dilatory tactics adopted by the convicts, suffice it would be to state that seeking redressal of one's grievances through procedure established by law is the hallmark of any civilised society. The courts of this country cannot afford to adversely discriminate any convict, including death row convict, in pursuit of his legal remedies, by turning a Nelson's eye towards him.

"As a cumulative effect of the aforesaid discussion, I am of the considered opinion that the execution of warrants issued by this court vide order dates January 17, 2020 deserves to be postponed till further orders."

The court said a copy of this order be given to the counsel for convicts and the jail officials present in the court.

"The jail superintendent is directed to file the compliance report by tomorrow," it said.

Nirbhaya's mother Asha Devi said she will continue her fight till the convicts are hanged.

Devi told reporters her "hopes are dashed" but she will continue her fight till the convicts are hanged.

"These convicts have no right to live. We keep getting disappointed by the system. I will continue my fight till the convicts are hanged," she said. on

The advocate representing Nirbhaya's parents told the court that for last one year the convicts have been asked repeatedly to avail their legal remedies but they were avoiding.

"They are using delay tactic one by one. The convicts have been misused entire system," the advocate said.

Vinay's mercy plea before the president is pending.

During the argument, which lasted for over two hours, advocate Vrinda Grover, appearing for Mukesh, too sought stay of execution.

Mukesh's mercy plea was dismissed by President Ram Nath Kovind on January 17. The appeal against the rejection was thrown out by the Supreme Court on Wednesday.

Grover said, "If the mercy plea of Vinay allowed, it will open a chance for me to file another mercy plea. In Yakub Memon's case there were talks of filing second mercy plea. It's wrong to say that there's no legal remedy left."

The curative petitions of Vinay and Akshay have been rejected by the apex court. Pawan is the only one yet not to file a curative plea.

Convicts have the option of moving a mercy petition before the president only after the apex court dismisses their curative plea.

Earlier in the day, the apex court dismissed Pawan's plea seeking review of the decision by which his application claiming to be a juvenile at the time of the commission of offence was rejected.

A 23-year-old physiotherapy intern who came to be known as "Nirbhaya" (the fearless) was gang raped and savagely assaulted on the night of December 16, 2012, in a moving bus in South Delhi. She died of her injuries a fortnight later in a Singapore hospital.