If you invite someone to a government programme, you should not insult them, says Mamata Banerjee at Netaji event after slogans raised against her. 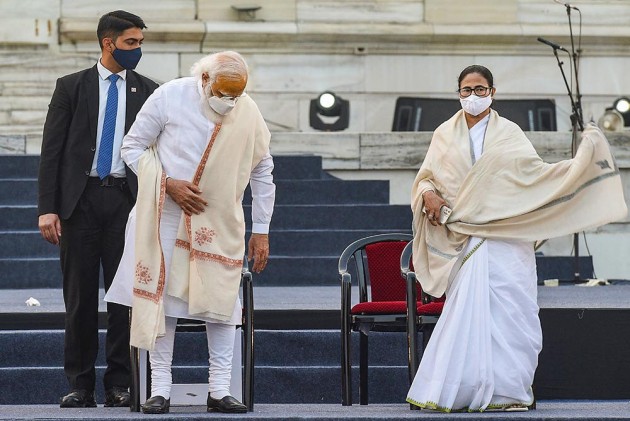 In an awkward situation at the Victoria Memorial Hall where Prime Minister Narendra Modi and West Bengal Chief Minister Mamata Banerjee shared a dais to pay tribute to Netaji Subhas Chandra Bose on his 124th birth anniversary, Mamata refused to deliver her speech after a section of the audience greeted her with Jai Shree Ram, a slogan associated with the BJP and Hindutva forces but in no way with Netaji.

"I think government events should have some decorum maintained. I am thankful to the prime minister and the Union culture minister for inviting me here. But I think it is not right to insult the invitees," Mamata said, adding that in protest of this she would not be delivering any speech.

She ended her speech only with “Jai Hind”, the slogan of Netaji's Indian National Army. Mamata’s party, the Trinamool Congress, has Jai Hind as one of its slogans.

A section of the audience at the venue, Victoria Memorial Hall, had repeatedly shouted Jai Shree Ram the moment the event moderator invited Mamata to deliver her speech.

The same section of the audience shouted “Bharat Mata Ki Jai”, another slogan associated with the BJP, when Modi took up the microphone.

The chief minister, though, did not leave the venue.

The Prime Minister, during his speech, brought no reference to the incident around the chief minister. He did not chant Bharat Mata Ki Jai, with which he often begins or ends his speeches. He chanted only Jai Hind before and at the end of his speech at Victoria Memorial Hall.

Patel said that apart from the Union government's events in Kolkata, Union petroleum minister Dharmendra Pradhan paid tribute to Bose at his ancestral home in Cuttack, Odisha, and Gujarat chief minister Vijay Rupani paid tribute at Haripura in Gujarat, the place that hosted the Congress session that first elected Netaji as the Congress president.

Modi and Mamata, who are set to lead each other's parties in the coming state Assembly elections in about three months, shared the dais to pay a tribute to Netaji Subhas Chandra Bose on the national hero's 124th birth anniversary.

Both of them have already announced year-old celebrations on behalf of their governments culminating in Bose's 125th birth anniversary celebration next year.

Modi, after arriving in Kolkata, paid a visit to Netaji's residence, attended events on Netaji at the National Library and then went to Victoria Memorial Hall where he was joined by Banerjee and Bengal governor Jagdeep Dhankhar.

The chief minister earlier led a massive rally in Kolkata to celebrate the day. She highlighted Netaji as a true leader who unified all sections of the country.

While the Prime Minister has declared January 23 as Parakram Divas (courage day), the Bengal chief minister has announced it as Deshprem Divas (patriotism day) and demanded that the Centre announce a national holiday on January 23.

On social media, people started reacting to the Jai Shree Ram slogan and criticised those who raised it.

"I condemn the way our chief minister was insulted," psephologist Biswanath Chakraborty, a professor of political science at Rabindra Bharati University, wrote on Facebook.