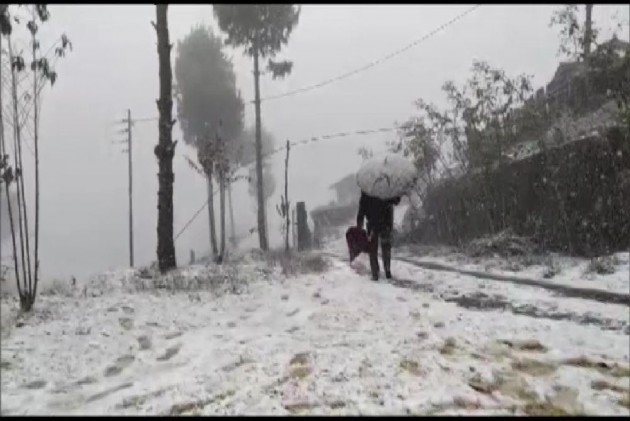 Luvishe, a medium-size village in Aghunato Circle of Zunheboto district, Nagaland, is witnessing a snowfall after 37 years and videos and photographs of the same are going viral on social media.

H. Khehovi, the MLA from Suruhoto Constituency, Zunheboto, shared a video on Twitter and wrote: "What a wonderful gift for the people of Luvishe Village under Aghunato sub-division of Zunheboto district to experience snowfall after 37 years.

"Indeed, Mother Nature have showered her blessings upon Nagaland this Christmas," he wrote.

Here are the videos and photos going viral on Twitter:

What a wonderful gift for the people of Luvishe Village under Aghunato sub-division of Zunheboto district to experience snowfall after 37 years.

Luvishe village in #Nagaland is experiencing snowfall for the first time in nearly four decades. The village has a population of 364 people, as per the 2011 census.#WinterTales #NorthEast pic.twitter.com/12vqkNwkvH

A village of Shamator, Tuensang has been experiencing a snowfall this year, unusually. And many places in Nagaland have been experiencing it as well. It's beautiful & celebration but on the contrary suddenly its a sign of global warming which we must be aware of. #NAGALAND pic.twitter.com/aw3tMgD1bY

You don't need to go a European country in search of such majestic view. This is our very own #Nagaland. This beautiful piece of land witnesses snowfall after 37 years. #DzokouValley @TanyaKhanijow @Larissa_wlc #Takemetonagaland pic.twitter.com/aGnN4ThIGd