Home  »  Website  »  National  »  Modi Govt's Expiry Date Is Over. We Are Now Here To Build A New India: Mamata Banerjee At Kolkata Rally

Modi Govt's Expiry Date Is Over. We Are Now Here To Build A New India: Mamata Banerjee At Kolkata Rally 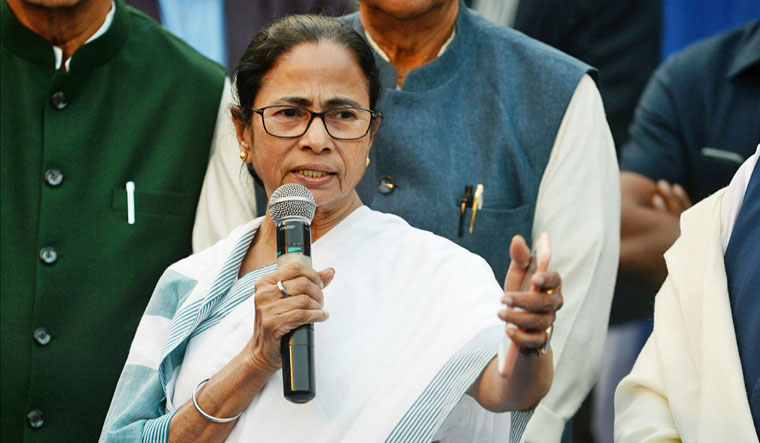 Addressing a huge gathering at the mega rally in Kolkata on Saturday, Trinamool Congress chief and West Bengal chief minister Mamata Banerjee said the Narendra Modi government's expiry date is over and it is time for a new morning for the nation. Almost all opposition parties except the Biju Janata Dal and the Communist parties attended the rally.

"We will figure that out later. The need of the hour is to defeat Narendra Modi and the BJP," she asserted. Ms Banerjee said that the BJP was finally on the backfoot after "looting" the country for years, and their "Achhe Din" will not be back no matter what promises they make.

"BJP has two seats in West Bengal. They will lose that very soon. Just wait and see how our allies will do in the upcoming elections. I urge Hardik and Jinesh to keep moving ahead. There will be no achche din for BJP. I am not concerned about who becomes the PM, I just want BJP to go, added Banerjee.

"This meeting has been forced by historical necessity. You ask who's the leader of the Opposition. There are so many people on the stage. Can't you see? We have many leaders unlike your party. They have destroyed the image of CBI that we used to respect before. Officers are not bad," she added.

"There is a lakshman rekha in politics that you should not cross. PM targeted everyone. Then why should we not target him? He claims he is clean but look at all the scams his govt is involved in. Things change, even weather changes, then why shouldn't the government change," Mamata Banerjee said.

Criticising the BJP, she said, "There is courtesy in politics, but BJP does not follow it. Those who are not with BJP are called thieves."

Banerjee, whose speech lasted for nearly 25 minutes, also claimed that the BJP does not give respect to many of its own senior leaders and people like Rajnath Singh, Sushma Swaraj and Nitin Gadkari are ignored in the saffron party.

"Modi and his associates are now talking of collective leadership, but if BJP wins the Lok Sabha polls these leaders will be ignored again," she said.

Noting that the present situation in the country is of "super Emergency", Banerjee said it is worse than that imposed by Indira Gandhi and raised the slogan of 'Badal do, badal do, Delhi mein sarkar badal do' (change the government).

She alleged that the BJP has divided the nation through its divisive politics.

"What Pakistan could not do in 70 years, it (BJP) has succeeded in doing in just four years," the firebrand Trinamool Congress supremo said.

She claimed that under the Narendra Modi government, banks, CBI, RBI, economy and democracy have all suffered irreparable damage.

"NPA, Rafale, insurance are big scandals. Many scandals have happened during this regime and still they (BJP) want to be in power," Banerjee said.

Citing a Bengali proverb, she said that the mother of thieves has the loudest voice.

"There is courtesy in politics, but BJP does not follow it. Those who are not with BJP are called thieves," she said.

Banerjee said that the Modi government has targeted all opposition leaders who spoke against the BJP and have not spared Sonia Gandhi, Akhilesh Yadav, Mayawati and herself.

The Modi government has not kept any of its promises made before the 2014 elections, she claimed, adding "Acche din will not come for BJP again. You (BJP) have missed your opportunity."

The mega rally organised by the TMC is being seen as a first step towards the formation of a coalition against the BJP ahead of the 2019 Lok Sabha polls.

“ What Hitler has done with Germany, Modi-Shah duo want to do the same. The country is fed up with them,” the Delhi CM said.

Terming the united opposition rally as historic, Andra chief minister the single point agenda of the opposition is to save India.

“ We have only one ambition to Save India. Save Democracy. We have to unite India as the BJP is trying to divide India. The BJP and the NDA have betrayed the country by doing frauds...in the Rafael deal it has misled the nation...the government is not bothered in controlling inflation but is interfering in federal work.”

He warned the BJP for interfering in Karnataka. “If you misbehave in Karnataka, you will have to pay the price.”

Leader of Opposition and senior Congress Mallikarjun Kharge accused PM Modi promising a scam- free government. But they the Modi government have so many scams.

“While the PM says He won’t take bribes or won’t let anyone take bribes. But he is giving to Arabia and Ambani...”

(With inputs from Probir Pramanik in Kolkata)

EVM Is Chor Machine, Its Use Must End: Farooq Abdullah