Following the encounter, there were clashes between protesters and the police in which several protesters were hit by pellet.

Three militants were killed on Friday during an encounter with the police, the army and paramilitary forces in the Pulwama area of South Kashmir.

The police said the slain militants were involved in Thursday’s attack on a BJP leader’s residence in Srinagar in which one J&K police constable was killed. During the encounter, the forces blew up the house in which militants were hiding with an IED. Of the three slain militants, two had joined militancy in February and one in March this year.

Following the encounter, there were clashes between protesters and the police in which several protesters were hit by the pellet. 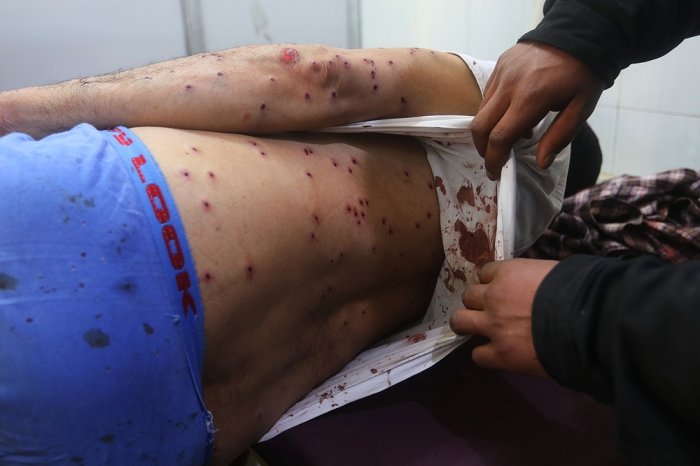 A civilian injured by pellets during the crossfire.

“After yesterday’s attack on the BJP leader’s residence, the police swung into action to track down the attackers. We got a lead from Pulwama. We arrested an over-ground worker (OGW) and based on what he said during his interrogation, we arrested two other persons and got the address of the hideout at Kakpora Gatmulla. The army, the police and CRPF put a cordon around the house at 4 am and the encounter started,” the inspector-general of police, Kashmir, Vijay Kumar, said.

He said during the encounter, the holed-up militants tried to come out of the cordon but after the forces fired back, they retreated into the house. He said in the encounter three militants were killed. Kumar identified them as Suhail Nisar Lone, Yasir Wani and Junaid, all from Pulwama.

The IGP said two militants, Suhail Nisar Lone and Junaid, were involved in Thursday’s attack on the BJP leader’s house. He said one AK-47, one pistol and one SLR were recovered from the encounter site. He said the militants had snatched the SLR from Nowgam during the attack on the BJP leader's house and its recovery from the encounter site proves they were the same militants involved in yesterday's attack. He said the attack on the BJP's leader's house was jointly carried out by the Al-Badar and The Resistance Front. He said initially the police thought all the four militants were from the TRF.

Kumar said though politicians are constant targets, people face a higher level of threat from militants. “We categorise protected political persons as X, Y, Z as different political parties and political persons people have different levels of threat. We agree that the BJP activists face a higher level of ore threat. We yesterday conducted a drill on protected persons of the BJP and the Apni Party to check our preparedness. Next time such an incident happens (attack on the protected person), militants would be neutralized at the same place,” Kumar added.

He said last year and this year there has been far less infiltration. He said a local militant, killed in Shopian on March 28, Inatullah Sheikh, had come from Pakistan recently and even his family didn’t know about him. He said it looks he might have returned to Kashmir from Nepal.

Sheikh, a resident of Shopian, was active since 2018 and had gone to Pakistan that year for arms training. In the Shopian encounter on March 28, two militants, including Sheikh and an Army trooper, was killed. During the encounter, one AK-47 rifle and an M-4 was recovered from the slain militants.

Meanwhile, the IGP said a woman was wounded during the crossfire and four persons were injured in the clashes after the encounter.  However, locals said the police and security forces fired pellets indiscriminately leading to injuries to several people, including a retired teacher. The doctors at Pulwama hospital said 11 people were wounded by pellets.