‘We have to initiate a peaceful struggle the way farmers have started in Delhi,’ Mehbooba tells party workers in Baramulla 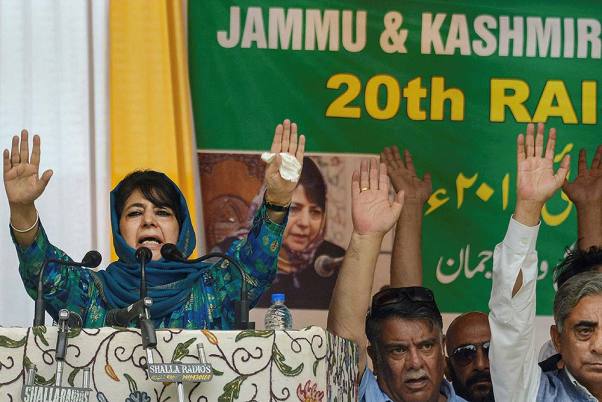 Peoples’ Democratic Party leader and former chief minister of J&K today said there is need for peaceful struggle on the pattern of farmers’ protest in Jammu and Kashmir for the restoration of Article 370.

“After usurping the rights of people by removing Article 370, people here are frightened. There is a need for a peaceful struggle to strive for a resolution of the Kashmir issue and also for the restoration of Article 370. We have to initiate a peaceful struggle the way farmers have started in Delhi,” Mehbooba said talking to reporters in Baramulla after holding a convention with the party workers.

“The government has come up with a domicile law. It is imposing property tax and other taxes. It has reduced the age of retirement of employees to 48. It seems the government is out to break the economic prosperity of the people of J&K. They want to reduce people very poor so that they will not talk about the Kashmir issue or Article 370,” she said.

She described the “daily imposition of different taxes” as a conspiracy to spread poverty in J&K as a means to force people to give up talking about the Kashmir issue and Article 370.

She said if the government thinks the situation in J&K is stable, then why is it bringing envoys from different parts of the world to take them on a guided tour? “The government dismantles bunkers to show the envoys that there is normalcy when there are one million troops present here. They then take them to meet some selected people. After that they seek assurance from the envoys in New Delhi that everything is normal in J&K. It shows that the government is also in a panic that whatever it has done in J&K and whatever it is doing in J&K is wrong,” she added.

Earlier, addressing the first party workers convention of district Baramulla after August 5, 2019, Mehbooba said the efforts of the government of India to paint an “all is well” picture of the situation in Jammu and Kashmir in front of the foreign envoys is hogwash even as the people of J&K live in misery devoid and robbed of their constitutional rights. “The very effort smacks of ill intention when the government, instead of trying to win hearts of minds of the people of the state is seeking character certificate from the envoys of foreign nations through guided tours to misrepresent the situation on the ground,” she added.

“Instead of winning the hearts and minds of the people of J&K, New Delhi puts all its efforts to woo foreign envoys and seek their certificate on the situation here. Whereas the fact of the matter is that having almost a million personnel on the ground in J&K the government still feels insecure,” she said.

“No matter what they try to project in these guided tours, the world knows the reality of Kashmir. Where people have been robbed of their constitutional rights, voices muzzled and hundreds put in prisons without rhyme or reason,” she added.

“Though they want to change the goalposts, restoration of the special constitutional position of J&K and resolution of the larger political issue through dialogue and reconciliation remains fundamental demand and desires of the people. No amount of coercion can change that,” Mehbooba said.