Major Strike In Delhi-NCR Possible, The Tajikistan Earthquake Is Another Warning Bell

The Tajikistan earthquake has rocked the common man again. India can learn from Japan on how to handle a major earthquake, says Dr Sandip Som, an expert in seismology.

The Delhi and the National Capital Region was rocked by a swarm of earthquakes last year. Coming at a time when the entire country is grappling with the COVID-19 pandemic, quakes, always seen as a bad omen, have made the common man hypertensive and asking the obvious questions. Friday night, just after dinner, the earth shook violently again. It was around 10:30 pm and social media was abuzz from Srinagar to Lucknow, the impact of the earthquake originating in Tajikistan was felt strongly. Coming at the back of the Uttarakhand glacier burst, the panic waves were understandable.

In the last 100 years, which is rather insignificant in the geological time scale considering earth’s age is 4.5 billion years as per radiometric dating, India have been struck by at least 15 high-intensity earthquakes with the one on Republic Day in 2001 at Kutch, Gujarat killing 30,000 and damaging properties worth millions, most catastrophic.

The Himalayan belt and south of Mount Everest has been a vulnerable area. Nepal and large parts of northern Bihar and UP were rattled by a 7.8 magnitude earthquake on April 25, 2015. In the Himalayan region, the 50-second quake was the deadliest in less than 100 years as 9,000 died and more than 22,000 got injured. Within 17 days, the region was struck by a second one measuring 7.3 on the Richter scale. Both quakes left 600,000 homeless and properties worth 1,000 crores damaged.

ALSO READ: Earthquakes Rattle Delhi's Nerves, Experts Not Sure When The Big One Is Going To Strike

The Delhi-NCR’s proximity to the Himalayas, more specifically morpho-geotectonic zones like the Terai plain and the Shivalik range, has left the region vulnerable to earthquakes. The recent quakes may have only made their presence felt in terms of intensity but since Delhi is encased between two faults, viz Mahendragarh-Dehradun Subsurface Fault (MDSSF) and Great Boundary Fault (GBF); it will always remain prone to disaster. A fault allows blocks of earth to move relative to each other thereby releasing an enormous amount of strain that makes the crust shake.

Dr Sandip Som, Deputy Director-General, Geological Survey of India, talks to Outlook on the recent spate of earthquakes and what lies ahead.

Outlook: Delhi has been rocked by at least 14 earthquakes in two months. What is the reason for this high frequency?

Dr Som: Delhi and its adjoining areas are located in the northernmost continuity of Aravalli Ranges. The north-eastern part is occupied by the Himalayan tectonic belt and the southern part is occupied by the Proterozoic Delhi fold belt and gneissic batholithic complex. Recorded historical and significant past seismic activities show 6.5 M (magnitude) at Delhi in 1720, 6.8 M at Mathura in 1803, 5.5 M at near Mathura in 1842, 6.7 M near Bulandshahar in 1956, 6.0 M near Faridabad in 1960, 5.8 M near Moradabad in 1966. National Centre for Seismology (NCS) is maintaining a close network of seismic stations in and around Delhi and it is seen that spatial distribution of seismicity shows seismic activity concentration mainly at three different regions, namely west of Delhi, near Sonepat and close to Rohtak and along the Mahendragarh-Dehradun Subsurface fault (MDSSF) and Delhi Subsurface Ridge (DSR). Delhi is already located in the Zone IV of seismic zonation map of India. These seismic activities are all related with different tectonic elements because of continuous deformation processes.

Q: Like a cyclone, can an earthquake be predicted?

A: I would refrain to use the word prediction. But no! At present, scientists cannot forecast an earthquake.

Q: Why do earthquakes happen?

A: It happens due to the release of local strain and stress and solely depends on tectonic deformation patterns. However, it has been observed particularly in the Himalayan region, frequency of small magnitude earthquake increases during rainy season and is related with lubrication of fault surfaces by rain water. It does not occur without warning. Only way to understand the behaviour is long term monitoring of stress and strain of the more deformation areas.

ALSO READ: Jolted Several Times Recently, Why A Major Earthquake Could Be Catastrophic For Delhi-NCR

Q: Is there a record of such high frequency of earthquakes in any part of India or on the planet?

A: Yes, there are. Most of the Zone IV and Zone V areas regularly show these small earthquakes.

Q: Most of the earthquakes around Delhi are of low to medium intensity. What do these signify?

A: These indicate ongoing tectonic deformations (plates changing configuration). Once we can delineate the high strain zones, it will help to constrain the locales of future major earthquakes.

Q: The earthquakes are also of shallow focus. What can be the repercussions?

A: Shallow earthquakes will damage more than deeper earthquakes of same magnitude because of more seismic wave amplification.

Q: Epicentres of recent earthquakes have been in and around Delhi-NCR. Is that a cause for concern?

A: Delhi-NCR region is at high damage risk zone. Under such a situation, the best solution is to become an earthquake resilient society, similar to that of Japan. To achieve this we need long term as well as short term preparation both at government level as well as at an individual level. But are we trying to become one? That is the main concern. 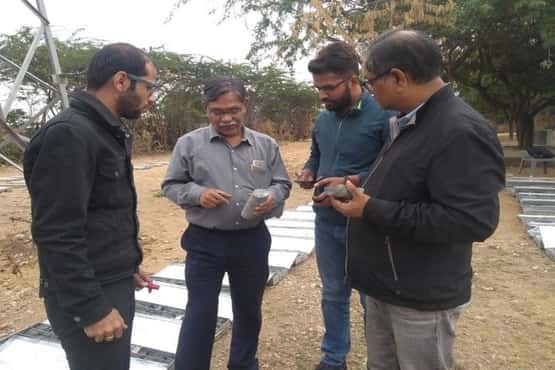 Q: What do you mean by earthquake-resilient?

A: As per UN’s Internal Strategy for Disaster Reduction, the term ‘resilient’ is defined as: “The capacity of a system, community or society potentially exposed to hazards to adapt, by resisting or changing in order to reach and maintain an acceptable level of functioning and structure. This is determined by the degree to which the social system is capable of organising itself to increase this capacity for learning from past disasters for better future protection and to improve risk reduction measures. ISDR emphasises that resilience is an evolving process that includes pre-disaster mitigation, preparedness, response and recovery.

Q: How is the Geological Survey of India tracking earthquakes?

A: Earthquake research not only includes tracking earthquake but also to understand the active tectonics and mapping faults or weak zones that may act as earthquake source zones. We at GSI have deployed 30 permanent GPS stations across the country to monitor the plate movement and develop the strain map to identify zones of earthquake hazard. Work is under progress and first phase is likely to be completed very soon. We also carryout micro-zonation studies at to evaluate potential geological vulnerable sites within cities that becomes an important input to develop building codes for earthquake resistant structures.

Q: As part of the mitigation process what else is being done?

A: The geological/earth science agencies such as GSI, NCS are involved in carrying out various studies on monitoring earthquake events and identifying stress build up areas. There is this National Building Code of India by Bureau of Indian Standards that provides the standard for earthquake resistant parameters. The civil engineering practice in Japan is fully compliant to such codes, where retrofitting of old and seismically vulnerable structures have aggressively been pursued and new structures are designed with seismic resilience. In this regard, strict laws, government’s commitment as well as community’s resolution is essential.

Q: Are we prepared to face natural disasters like earthquakes?

A: The most important component is social awareness. This is essentially achieved through the education system, work place culture and media providing the knowledge and training to the individuals in a society. The Government’s role is paramount in steering the concerned agencies and the society toward achieving the goal and not become complacent.

In Japan, all smart-phones are installed with an earthquake and tsunami emergency alert system. The alarm gets triggered around two to ten seconds prior to the shaking, chanting “Jishin desu! Jishin desu!” (There is an earthquake) until the earthquake stops.

Q: We have had earthquakes in Jharkhand and Karnataka. Do they have any relationship with those in Delhi-NCR region?

Q: Is there any relationship between ecological imbalance and earthquakes?

A: This is not known.