The UP government said there is no ban on interstate travel but left it to the district administrations to take a call on the movement of people from adjoining Delhi. The state has, however, not restarted its inter-state bus service. 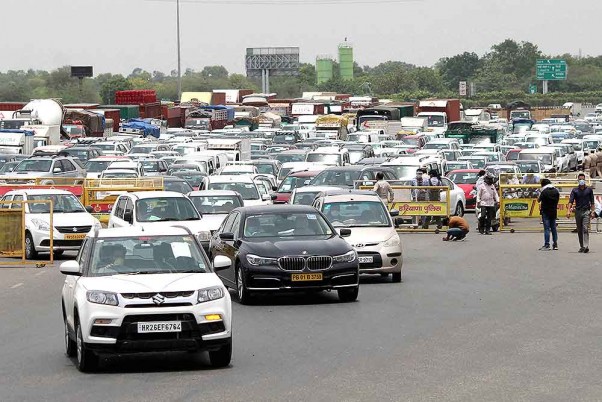 Traffic jam on Delhi-Gurugram road after the Haryana government sealed its border due to a sudden surge in coronavirus cases, during ongoing COVID-19 lockdown-4, in Gurugram.
PTI Photo
PTI May 31, 2020 00:00 IST Maharashtra, Tamil Nadu, North East To Continue Curbs On Inter-state Travel

After the Centre allowed lifting of restrictions on inter-state movement of people, states like Maharashtra and Tamil Nadu, which have reported the highest number of coronavirus cases, and those in the Northeast on Sunday decided to continue with the curbs after the end of the fourth phase of the lockdown.

Others like Rajasthan and Telangana announced they are allowing inter-state movement as part of easing of restrictions under the 'Unlock-1', after such travel was banned for over two months due to the coronavirus lockdown.

The Karnataka government, while allowing inter-state movement, said separate orders will be issued by Health and Family Welfare Department on inter-state travel of people to Karnataka.

The UP government said there is no ban on interstate travel but left it to the district administrations of Ghaziabad and Noida to take a call on the movement of people from adjoining Delhi. The state has, however, not restarted its inter-state bus service.

The Odisha government said it has initiated the process to pave way for resumption of inter-state bus services.

Letters have been sent to all the states with which Odisha has bus connectivity seeking their response for resumption of inter-state services, Transport minister Padmanabha Behera told PTI here.

The governments of West Bengal, Gujarat and several other states are yet to take a call on the issue.

The discordant stance taken by the states on the issue is similar to the confusion that prevailed when the Centre allowed resumption of domestic air services on May 25, as the states came out with their own set of rules for passengers.

The Home Ministry, while lifting the restrictions on Saturday under 'Unlock 1', had said that governments of states and union territories will be free to regulate movement for public health reasons, provided they give wide publicity to the restrictions in advance.

The Maharashtra government said that "inter-state and inter-district movement of persons like stranded migrant workers shall continue to be regulated" as it extended the lockdown till June 30.

The state government has decided against passenger movement by train and domestic air travel unless specially allowed through separate orders and standard operating procedure.

However, inter-state and intra-state movement of medical professionals, sanitation personnel and ambulances will be allowed, it said.

E-pass will be compulsory for inter-zone and inter-state travel, he said.

In the Northeast, where less number of cases have been reported, Meghalaya has extended the ongoing lockdown till June 6, continuing with the existing curbs, including not allowing inter-district and inter-state movement of vehicles barring those having lockdown passes.

The Mizoram government too said all inter-state or cross-border movement of vehicles carrying passengers is strictly prohibited except those permitted by the Home department.

Meghalaya has registered 27 cases while Mizoram had one case.

Karnataka Chief Secretary T M Vijay Bhaskar issued an order saying "there shall be no restriction on inter-state and intra- state movement of persons and goods".

No separate permission/approval/e-permit will be required for such movements, it said.

The order said based on public health and assessment of the prevalence of COVID-19 in various states, separate orders will be issued by Health and Family Welfare Department on inter state movement of people to Karnataka.

Under the fresh guidelines by Rajasthan government, there would be no restriction on interstate and intrastate movement of persons and goods and no separate pass, permission, approval or permit would be required for that.

The West Bengal government, which on Saturday allowed intra-state (inter-district) movement of government and private buses from June 1, has not said anything about restarting of inter-state bus services.

Though Delhi has been witnessing a steady rise in cases, officials in the city government said it is in favour of allowing interstate movement of people from Noida, Ghaziabad, Gurgaon and other NCR cities.

It is authorities in Uttar Pradesh and Haryana which have restricted the entry from the national capital, citing spike in COVID-19 cases, they said.

"There is no ban on interstate and intra-state movement by persons or goods," Uttar Pradesh Chief Secretary R K Tiwari said, issuing the fresh guidelines on Sunday.

There is no need for a separate approval or an e-permit, the guidelines said.

However, the inter-state bus services will not be operated by the government.

The Union Home ministry had on Saturday said that there shall be no restriction on inter-state and intra-state movement of persons and goods and no additional permission required for such travels.

"However, if a state or UT, based on reasons of public health and its assessment of the situation, proposes to regulate movement of persons, it will give wide publicity in advance regarding the restrictions to be placed on such movement, and the related procedures to be followed," it had said.

The ministry also made it clear that movement of passenger trains and 'Shramik specials' meant to ferry migrant workers, domestic air travel and return of Indian nationals stranded outside the country will continue to be regulated as per the standard operating procedure.

India, China Bring In Heavy Equipment And Weaponry To Their Rear Bases In Ladakh