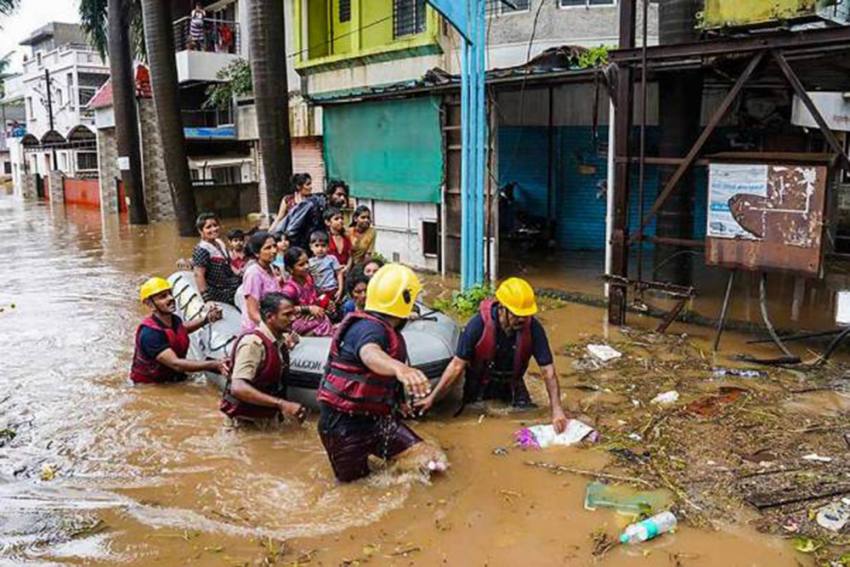 Following heavy rainfall last week, casualties from rain-related incidents have kept mounting in Maharashtra with fatalities rising to 213 on Wednesday.  One of the worst-hit regions in the state was the Raigad district which alone accounted for nearly 100 deaths. Eight persons remain missing

Of the 213 deaths reported this month, the maximum 95 were reported in Raigad district, followed by 46 in Satara, 35 in Ratnagiri, 15 in Thane, seven in Kolhapur, four in Mumbai, three in Pune, four in Sindhudurg and two each in eastern Maharashtra's Wardha and Akola districts, said a statement issued by the disaster management department.

Since June 1, as many as 300 people have died in rain-related incidents in Maharashtra. A total of 61,280 domesticated animals also perished in the floods, most of them in Sangli, Kolhapur, Satara and Sindhudurg districts.

Eight people are still missing while 52 injured persons are being treated at various government and private hospitals, it said. Most of the deaths in Raigad, Satara and Ratnagiri districts were caused by landslides, while floods claimed many lives in Kolhapur and Sangli.

Bridge washed away in Thane

Rain-related damage continued across Maharashtra on Wednesday when a bridge on the Vaitarna river in Thane district got washed away. The incident has caused traffic disruption between Wada and Sahapur Talukas.

A four-five feet deep crater was formed on the road, following which it was closed for traffic as a precautionary measure, he added. Besides, a road in Dahigaon on the Khardi-Temba-Wada route also suffered damages at various spots, affecting the movement of buses and commuters going towards Nashik, another official said. Thane and its neighbouring areas have been witnessing heavy rains since last week.

Heavy rains in the Sahyadri range led to the swelling of rivers flowing through Satara, Sangli and Kolhapur districts, forcing the evacuation of people.

As many as 4,35,879 people were shifted to safer places, including 2,11,808 in Sangli district alone, the statement said. The Sangli district in Western Maharashtra did not receive heavy rainfall, but discharge of water from the Koyna dam resulted in the Sangli city and several villages getting inundated. There are 349 relief camps set up for evacuated people -- 216 in Kolhapur, 74 in Sangli, 29 in Satara, 16 in Ratnagiri and 14 in Raigad, the statement said.

An American non-profit organisation is set to deploy medical teams to treat survivors. Three medical teams, organised by Americares India staff in Mumbai and operated in partnership with local healthcare groups, departed for Sangli, Satara and Ratnagiri on Wednesday to provide urgently needed medical care and COVID-19 education to survivors for 10 days.

Earlier in the month, Maharashtra Chief Minister Uddhav Thackeray on Sunday expressed grief over the loss of lives in house collapses triggered by landslides following heavy overnight rains in Mumbai and announced an ex-gratia of Rs 5 lakh for the kin of each of the victims. Twenty-five people died in house collapse incidents after heavy showers caused severe water-logging and disruption of suburban train services and vehicular traffic in the metropolis.