The apex court has reserved its order till Tuesday on the floor test for the newly formed BJP-led government. 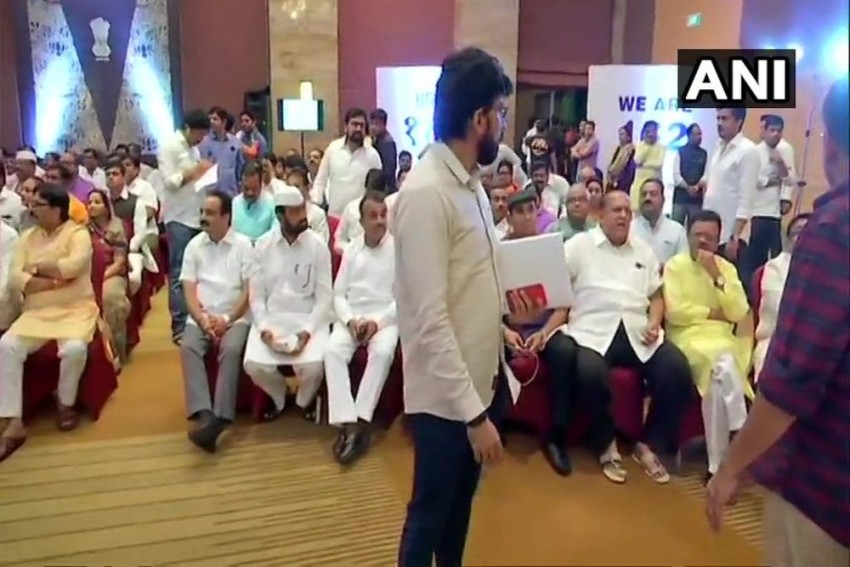 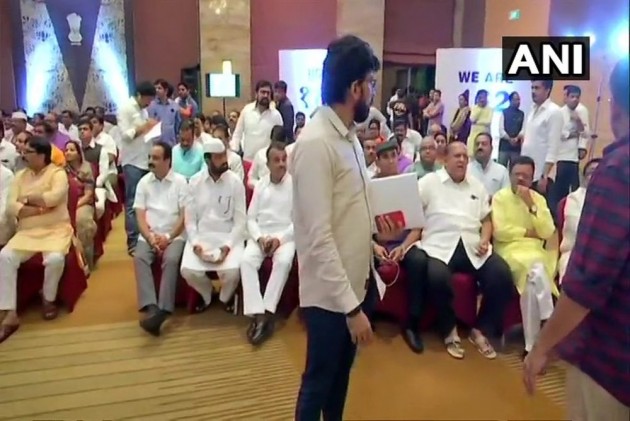 The Supreme Court on Monday said it will pass an order at 10.30 am on Tuesday on the plea filed by the Shiv Sena-NCP-Congress combine against the Maharashtra governor's decision to swear-in Devendra Fadnavis as chief minister. The bench of Justices NV Ramana, Ashok Bhushan and Sanjiv Khanna on Sunday asked Solicitor General Tushar Mehta to produce relevant documents including Maharashtra Governor's letter inviting BJP to form the government and letter of support of MLAs by 10 am.

Lawyers Kapil Sibal and Dr Abhishek Manu Singhvi represented the three parties who were left shocked by a surprise development on Saturday morning when  Devendra Fadnavis took oath as the Chief Minister, with NCP's Ajit Pawar as his Deputy Chief Minister. It came following an affirmation of alliance among Congress, NCP and Shiv Sena to form a non-BJP government in the state.

Get all live updates here:

8:05 PM: "We are here together for people of Maharashtra. A government was formed in the state without a majority. In Karnataka, Goa, and Manipur, BJP didn't have majority anywhere but they formed the government," says Sharad Pawar. This is Maharashtra, things don't work here that way, he says.

7:57 PM:  "We live by Satyamev Jayate. We are friends. We are string together. I dare anyone to try and break us," says Uddhav. "If you try to break our party, you wait and watch."

"No matter how much you try to reach out to our MLAs, we are together," Uddhav says, adding, "We all have come together not to bring down anyone."

7:20 PM: After the arrival of all the MLAs, Shiv Sena chief Uddhav Thackeray and son Aaditya Thackeray have arrived at Grand Hyatt hotel.

5:15 PM: In a show of strength, all Shiv Sena, Congress and NCP MLAs are expected to gather at a hotel in Mumbai.

Shiv Sena leader Sanjay Raut took to Twitter and said, “We are all one and together, watch our 162 together for the first time at grand Hyatt at 7 pm, come and watch yourself @maha_governor.”

We are all one and together , watch our 162 together for the first time at grand Hyatt at 7 pm , come and watch yourself @maha_governor pic.twitter.com/hUSS4KoS7B

2:24 PM: Anil Patil, NCP MLA who was reportedly missing and brought to Mumbai from Delhi by NCP leaders on Monday said: “When we reached the hotel (in Delhi), at least 100-200 BJP workers were present there along with a lot of police cars and personnel in civil dress. We were scared.”

2:16 PM:  Maharashtra CM Devendra Fadnavis’ first signature of this tenure was done on a CM Relief Fund cheque, which was handed over to Kusum Vengurlekar.

Chief Minister's Office, Maharashtra: CM Devendra Fadnavis’ first signature of this tenure was done on a CM Relief Fund cheque, on reaching Mantralaya, which was handed over to Kusum Vengurlekar by the Chief Minister. pic.twitter.com/e9klSBasiN

2:15 PM: Both the houses of the Parliament were adjourned till Tuesday amid the ruckus over the Maharashtra political crisis.

1:43 PM: Three NCP MLAs, who were 'missing' since Saturday after attending the swearing-in of Ajit Pawar as deputy chief minister of Maharashtra, returned to Mumbai on Monday.

12:30 PM: The Congress' alliance with the NCP and Shiv Sena has the support of 154 MLAs, the party said on Monday minutes after the Supreme Court reserved its order on a petition by the three parties on the formation of a new government in Maharashtra. The BJP will get a "befitting reply" in the floor test in the Maharashtra assembly, Congress' chief spokesperson Randeep Surjewala told reporters.

12:01 PM: NCP leader Jayant Patil claims they have the support of 162 MLAs. "Our numbers way above the majority mark."

11:54 AM: Rohatgi for BJP refers to constitutional provisions, says procedures of assembly like pro-tem speaker cannot be interfered with.

11:51 AM: "If BJP has a majority, why is it worried? I am happy to lose on the floor of Maharashtra Assembly: Singhvi to SC, seeking immediate floor test.

11:48 AM: SC bench says it is for the court to decide timing of floor test. Singhvi counters, saying the precedent is of 24-48 hours for a floor test.

Advocate Rohatgi counters, says, "floor test time is given by Governor, it is his right, why should court interfere at all."

11:44 AM: SC bench says it will take a call on floor test. Singhvi says if both sides are agreeing on necessity of floor test then why should there be a delay.

11:42 AM: SG Tushar Mehta says removing of Ajit Pawar as legislative party leader is not unanimous. "Twelve signatures out of 54 were missing from the letter given to the governor."

11:40 AM: Let there be an immediate floor test, advocate Singhvi, appearing for Congress-NCP tells SC.

11:36 AM: Advocate AM Singhvi points out that Ajit Pawar's letter may have the signs of NCP MLAs but that "doesn't say the letter is of support to BJP".

11:35 AM: "We have letters of support, we had informed the Governor of intent to form the government. We have 154 affidavits to show a majority," Singhvi tells SC.

11:33 AM: They have played a fraud on the Constitution, advocate Singhvi tells Supreme Court.

11:30 AM: "Let there be immediate floor test, there is precedent from the Karnataka case," Kapil SIbal tells SC

11:27 AM: Why could Governor not wait for 24 hours after we informed him of support and intent to form the government? asks Sibal. 'Was There A National Emergency To Have Swearing-In At 8 AM?'

11:24 AM: Why did Governor act in the wee hours of November 23? Why was President's Rule revoked at 5.47 am in such haste? asks Kapil Sibal

11:21 AM: "I am the NCP because I was chosen unanimously as a leader by my MLAs," Ajit Pawar tells SC.

11:17 AM: "I am legislative party leader, I am authorised to give letters of support. Feud within my party is for me to solve, I will solve it," Ajit Pawar's lawyer Maninder Singh tells SC

11:14 AM: Justice Sanjiv Khanna: "In previous cases, floor test was ordered to be held within 24 hours. Majority has to be proved on floor of the house, just letters of support to Governor may not be enough."

11:10 AM: "We are not concerned with the family feud, we have letters of support. Sharad Pawar indulging in horse-trading of NCP MLAs," says advocate Rohatgi.

11:05 AM: There is no evidence of fabricating NCP letters of support, says advocate Rohatgi representing CM Fadnavis.

11:02 AM: Sharad Pawar is trying to break away MLAs, Rohtagi tells the top court.

11:00 AM: Signatures of all MLAs are genuine, no proof of forged signs, says Mukul Rohatgi, appearing for CM Fadnavis.

10:56 AM: Solicitor General refers to letter of Maha Dy CM Ajit Pawar in SC, says it had endorsement of all 54 NCP MLAs.

10:54 AM: Ajit Pawar's letter of Nov 22 -- a day before swearing-in -- shows he had the support of all NCP MLAs in capacity of legislative party leader, says Mehta.

10:52 AM: "Ajit Pawar took the decision to support BJP in the interest of the stable government. As a legislative party chief Ajit had right to extend support," says SG Mehta

10:49 AM: SG Mehta says Gov imposed President's Rule after all options exhausted. "Sena-NCP-Congress were invited but failed to show support of majority leading to President Rule."

10:48 AM: No Horse-Trading If Entire Stable With Us, says Tushar Mehta

10:47 AM: SG Tushar Mehta begins submissions for Centre, reiterating timeline of events and inviting a party/alliance for government formation is Governor's exclusive domain.

10:44 AM: SG Tushar Mehta says that he has the copy of the Governor's decision.

10:40 AM: Shiv Sena leader Sanjay Raut said leaders of his party and the NCP and Congress will meet Maharashtra Governor Bhagat Singh Koshyari on Monday to present their side for government formation in the state.

He said the Shiv Sena, NCP and Congress have signatures of all their respective MLAs to prove majority in the House, which the combine will submit it to Supreme Court.

10:31 AM:  Rajya Sabha MP Binoy Viswam has given a Suspension of Business Notice in the Upper House under rule 267 over the 'Maharashtra government formation'.

10:27 AM: M Rohatgi, appearing for BJP in the top court says: "Today the record of the Governor will be presented in the Supreme Court. I have seen that along with a letter of Fadnavis, there was a letter by Ajit Pawar as head of the legislative party with signatures of all NCP MLAs. Governor was right in granting an invitation to him to form the government."

10:05 AM: Shiv Sena leader Anil Desai has arrived at the Supreme Court. The Supreme Court will continue to hear today the petition jointly filed by the NCP-Congress and Shiv Sena against the formation of BJP-led government in Maharashtra

9:59 AM: NCP leader Nawab Malik says, "Devendra Fadnavis must realise that he does not have a majority. He should realise that he has made a mistake. If he doesn't resign, we will certainly defeat the government on the floor of the House."

9:57 AM:  Devendra Fadnavis took oath as chief minister like a "thief on the run", an editorial in Sena mouthpiece 'Saamana' said.

"It is height of cheating as the governor accepted a letter of support submitted by Ajit Pawar which he had stolen from his party office. We don't want to insult this institution by calling it 'shamelessness'," the editorial said.

9:32 AM: Congress leader Priyanka Gandhi Vadra on Monday accused the BJP of disregarding the Constitution in Maharashtra and repeating the "game" it played in Karnataka.

"Have we reached the stage of open kidnapping of the mandate?" she said in a tweet.

9:29 AM: NCP leader Chhagan Bhujbal says, "This thing is very clear that (Sharad) Pawar Sahab did not direct anyone to do anything, neither he agreed to anything. If there would have been something, he would have told everyone (NCP leaders). Later, he (Sharad Pawar) made it clear that whatever has happened (Ajit Pawar's alliance with BJP) is not correct so we have to trust these things. We are the witness to these things."

9:00 AM: Two out of four NCP MLAs who were reported missing since after government formation in Maharashtra have reached Hyatt hotel in Mumbai. They were staying in a hotel in Haryana's Gurgaon.

"52 MLAs of the party have come back to us, one more is in touch with us," said NCP leader Nawab Malik.

8:30 AM: Amid fear of poaching,  MLAs of the NCP were shifted from a suburban resort to another hotel in Mumbai on Sunday late night, PTI reported. Shiv Sena is also expected to shift its MLAs from Lalit Hotel.