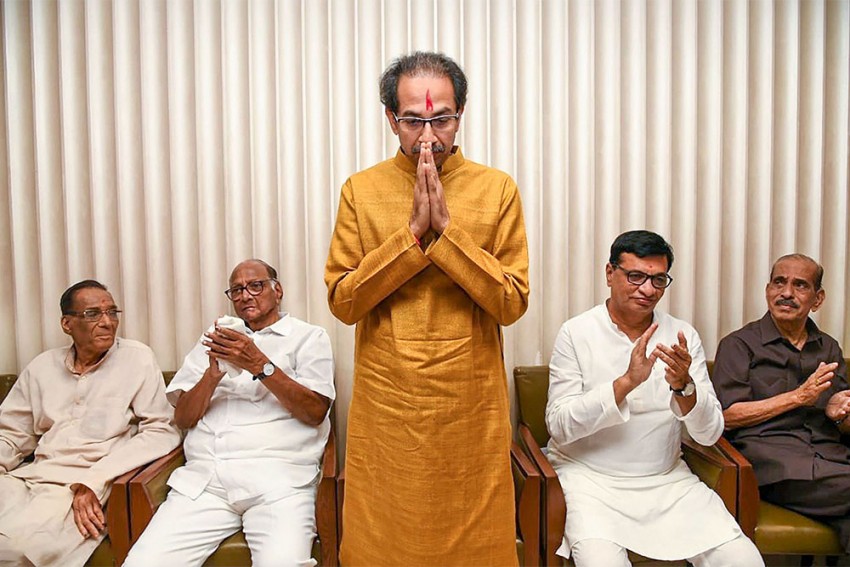 Shiv Sena's Uddhav Thackeray was unanimously chosen as the leader of the tri-party coalition of NCP-Congress-Sena and his name was proposed by the coalition for the Maharashtra Chief Minister's post.
Outlook Web Bureau 2019-11-26T09:10:10+05:30 Maharashtra Highlights: Uddhav Set To Be CM, Says Never Dreamed Of Leading State 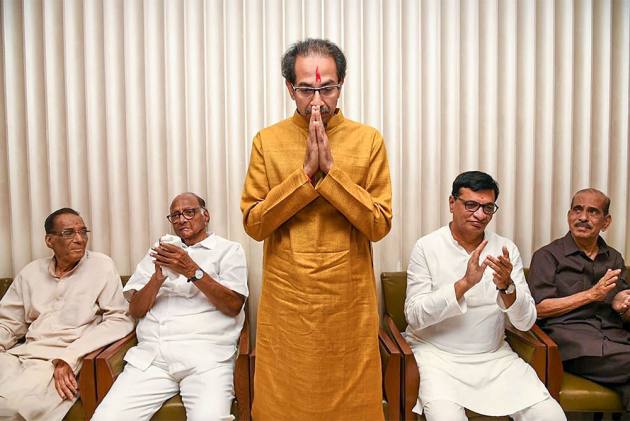 After Maharashtra Chief Minister Devendra Fadnavis resigned from his post claiming that the BJP "does not have the majority" ahead of the floor test,  the path was clear for the NCP-Shiv Sena-Congress combine to stake claim to government formation on Tuesday.

The Congress-NCP-Sena's MLAs on Tuesday passed a unanimous resolution to call their three-party coalition "Maha Vikas Aghadi". The resolution was taken at a joint meet between the MLAs of the three parties at Mumbai's Trident Hotel.

The tri-party coalition elected Sena Chief Uddhav Thackeray as their leader and also proposed his name for the top post in the state of Maharashtra.

The three parties were dealt a shocking blow by the BJP when it formed government in the state in a hushed manner on November 23 after NCP's Ajit Pawar lent support to Fadnavis.

8:50 PM:  "Uddhav Thackeray was unanimously elected as the leader. He'll definitely be the CM. He'll now go to Raj Bhavan and stake his claim to form the Government," said Nawab Malik.

8:48 PM:  Shiv Sena's Sanjay Raut when asked if 'PM Modi will be invited for the swearing-in ceremony of Uddhav Thackeray as the Maharashtra CM' he said: Yes, we will invite everyone, we will even invite Amit Shah ji.

8:38 PM:  Uddhav Thackeray said, "I accept the responsibility given by all of you. I'm not alone but you all are CM with me. What has happened today is the actual democracy. Together we will wipe off the tears of farmers in the state."

8: 37 PM: "I'm ready to answer all questions raised by Devendra Fadnavis. I am not scared of anything. Lies are not part of Hindutva. When needed you hug us and when not needed you leave us. You tried to keep us away," Uddhav Thackeray said.

8: 35 PM:  "I had never dreamed of leading the state. I would like to thank Sonia Gandhi and others. We are giving a new direction to the country by keeping faith in each other," Uddhav Thackeray said.

8:32 PM: Uddhav Thackeray said, "We will make this Maharashtra once again that which Chhatrapati Shivaji Maharaj dreamt of."

7:51 PM: "We all want Uddhav Balasaheb Thackeray to lead our alliance as the Chief Minister," says NCP's Jayant Patil.

The resolution is passed by all MLAs.

7:33 PM: The joint meet between the Sena-Congress-NCP MLA's is underway at Mumbai's Trident Hotel.

7:00 PM:  "Ajit Pawar will not come for today's meeting. There has not been any contact with him. But I have been meeting him over the past few days, I will meet him today as well," says NCP's Jayant Patil.

6:42 PM:  Mamata Banerjee also attacked the BJP for the recent Maharashtra developments and said: "Heard about freedom at midnight, never heard of government at midnight."

6:09 PM: The first session of the new assembly to begin from 8.00 am on Wednesday. Oath will be administered to the MLAs, says Pro-tem Speaker Kalidas Kolambkar.

6:07 PM: Shiv Sena was not born to do communal politics, they came into existence to serve the people of Maharashtra. Shiv Sena was spoiled after joining hands with BJP, says NCP leader Nawab Malik.

5:48 PM: "Our alliance (NCP-Shiv Sena-Congress) will last for a long time. This is the start of BJPs end. BJP has become very arrogant," says Nawab Malik. Adding Uddhav Thackeray is set to be the CM of the state.

5:45 PM: "This win is for the people of Maharashtra," says Nawab Malik after Devendra Fadnavis' resignation.

5:36 PM: Kapil Sibal on Devendra Fadnavis' resignation, "They knew they did not have the majority but they wanted more time. The Governor gave them 14 days, so obviously they all were hand in glove, they were hoping the Courts will not interfere."

5:17 PM: Manish Tiwari, "Turn of events have put the role of President under scanner"

5:10 PM: Congress President Sonia Gandhi has given her consent to the Common Minimum Program of the three parties (Shiv Sena-NCP-Congress). CMP is to be released after the joint meeting today. Modalities have been finalized between the alliance parties.

5:00 PM: BJP MLA Kalidas Kolambkar to be protem speaker of Maharashtra Assembly. He will take oath shortly in Raj Bhawan. Kolambkar says 'Oath of MLAs to be administered tomorrow when the session begins.

4:14 PM: Devendra Fadnavis and Ajit Pawar should apologise to the people of Maharashtra as their government was "based on lies and fell like a house of cards", the Congress said minutes after the Maharashtra chief minister stated he does not have a majority in the Assembly.

Congress' chief spokesperson Randeep Surjewala said the lack of majority of those "who kidnapped the people's mandate" has been exposed.

3:56 PM: Those who accused us of horse-trading have bought the entire stable, says Fadnavis.

3:51 PM: The hunger for power is such that now Shiv Sena leaders are even willing to ally with Sonia Gandhi, says Fadnavis.

3:49 PM: BJP will work as an effective opposition, says Fadnavis.

3:42 PM: Since there was President's Rule in Maharashtra, Ajit Pawar, as a leader of NCP legislature party, offered to support us top form the government, says Fadnavis.

3:41 PM: BJP waited for Shiv Sena but they never spoke to us, says Fadnavis.

3:38 PM: "BJP got the people's mandate. If we had fought separately, we would have won better mandate," Fadnavis says.

3:15 PM: Shiv Sena's Sanjay Raut on Ajit Pawar's resignation says, "This is a victory. Ajit Pawar is with us. We will prove our grand majority."

Uddhav Thackeray will be CM for 5 years, he added.

2:55 PM: NCP's Jayant Patil, on Ajit Pawar's resignation as Maharashtra Deputy CM, said: " It's you from whom I have come to know about the resignation of Ajit Pawar. I don't know about it, I would like to make a comment on it only after getting to know everything."

2:31 PM: Ramdas Athawale said: "We respect Supreme Court's order of carrying out a floor test tomorrow. NDA doesn't have the majority yet, I am sure we will get it by tomorrow as we trust Ajit Pawar that he will bring his MLA."

2:30 PM:  A meeting was held at the Prime Minister's chamber at the Parliament today. Home Minister Amit Shah and BJP national working president JP Nadda were present at the meeting.

Though there was no official word on what transpired, the leaders are believed to have deliberated on the Maharashtra situation.

2:29 PM: Jayant Patil of the NCP said : "I hope the Governor will listen to us and make Balasaheb Thorat, the senior-most member of the House, the Pro-Tem Speaker.

1:50 PM:  NCP, Shiv Sena and Congress MLAs to hold a joint meeting at 5 pm today to elect the leader of their alliance.

1:45 PM:  BJP's Ram Madhav, reacting to the show of strength of Congress-Shiv Sena-NCP MLAs in Mumbai's Hotel Grand Hyatt yesterday, said: "Majority has to be proven not in hotels or elsewhere but on the floor of the House. We're confident that on the floor of the house our govt will be able to prove its majority."

1:25 PM: When asked if NCP-Shiv Sena-Congress will be able to form a government in Maharashtra, former PM Manmohan Singh said, "I hope they will. We all respect the Supreme Court".

12:58 PM: BJP has called a meeting of all of its MLAs at 9 pm on Tuesday. BJP leader Rao Saheb Danve said, "We will prove our majority. Tonight at 9 pm, all BJP MLAs will meet at Garware Club in Mumbai."

12:20 PM: "The swearing-in of Devendra Fadnavis was carried out keeping everybody in the dark. He should step down from his post. We have the majority of at least 162 MLAs. At the time of the floor test, we will have the support of 170," said Shiv Sena leader Eknath Shinde.

11:42APM: NCP leader Supriya Sule welcomed the SC verdict tweeting, "On constitution day this is the best gift for the people of Maharashtra. Democratic and Constitutional values take precedence over politics. May the truth prevail. Jai Hind! Jai Maharashtra! #WeAre162"

11:30 AM: "We respect the court order. We are ready to prove majority and we will show it," said Maharashtra BJP chief Chandrakant Patil.

11:12 AM: Present Deputy CM Ajit Pawar has not been recognized in Vidhan Sabha Secretariat record as legislative party leader. Jayant Patil was appointed legislative party leader after Pawar extended support to BJP. Since Vidhan Sabha Secretariat has accepted Patil's position, it appears that it's him, and not Ajit Pawar, who has the power to issue a whip for NCP MLAs.

10:52 AM: The Congress welcomed the Supreme Court's verdict, saying the apex court has agreed to their plea for an immediate floor test.

"On Constitution Day, the Constitution has been respected," said Congress leader Prithviraj Chavan, asking Devendra Fadnavis to resign today itself.

10:50 AM:
All elected members in Maharashtra assembly to take oath on Nov 27, says the Supreme Court.

10:48 AM: Kapil Sibal, who appeared for the Shiv Sena-NCP-Congress alliance, mentioned before the apex court to restrain the Devendra Fadnavis Government from taking important policy decisions.

10:45 AM: The Supreme Court said the Pro tem Speaker will oversee the floor test. Congress state president Balasaheb Thorat is the seniormost MLA in Maharashtra Assembly and as per convention, he should be made Pro tem Speaker.

10:37 AM: Supreme Court's three-judge bench has started reading the pronouncement of the judgement on the petition jointly filed by NCP, Congress and Shiv Sena against the formation of BJP-led government in Maharashtra.

9:47 AM: Ahead of the Supreme Court's verdict today, Shiv Sena leader Sanjay Raut tweeted implying the coalition of Sena, NCP and Congress has more than 162 MLAs.

9:45 AM: "Legislature Secretariat has received a letter claiming that Jayant Patil is the Legislative Party Leader for NCP. But the decision has to be taken by the Speaker. As of today, it has not been decided," says Rajendra Bhagwat, Maharashtra Legislature Secretary.

9:30 AM: BJP leader Ashish Shelar says, "We are confirmed that Ajit Pawar is the leader of NCP on the Floor of the House, and his whip will hold as leader of legislature party."

9:00 AM: Shiv Sena will skip the joint sitting of Parliament called to mark the Constitution day, the party told Congress President Sonia Gandhi after meeting her in New Delhi.

"The government has murdered the Constitution in Maharashtra. After directions from party chief Uddhav Thackeray, we will be boycotting the joint sitting of Parliament called to commemorate the Constitution Day,"  said Sena MP Gajanan Kirtikar.

8:50 AM: The Supreme Court will start its hearing at10.30 am today on the Shiv Sena-NCP-Congress coalition's plea against the Maharashtra governor's decision to swear in Devendra Fadnavis as chief minister.

Two Kashmiri Political Leaders Released From Detention After Over 110 Days