Riding on a massive Modi wave sweeping through most parts of India, the BJP was set to return to power on Thursday as it led in 292 seats. 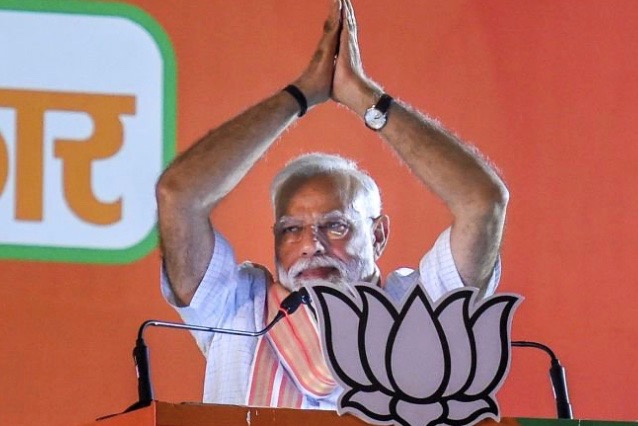 Congratulatory messages poured in from world leaders as Prime Minister Narendra Modi was set for a second consecutive term  in power with the BJP-led NDA winning even more seats than in 2014.

Israeli Prime Minister, Benjamin Netanyahu was the first world leader to congratulate his counterpart Narendra Modi, for scripting an "impressive victory" in the general elections, and vowed to strengthen their "great friendship" as well as bilateral ties.

Chinese President Xi Jinping sent a congratulatory letter to Prime Minister Modi, where he noted the great importance he attached to development of India-China relations, and his desire to work with PM Modi to take their "closer development partnership" to newer heights.

Riding on a massive Modi wave sweeping through most parts of India, the BJP was set to return to power on Thursday as it led in 292 seats, while the Congress trailed far behind with 51, according to trends released by the Election Commission for all 542 seats that went to polls.

"Greetings from the depth of my heart dear friend on your impressive victory in the elections," Netanyahu tweeted in Hebrew and Hindi.

"The election results are a re-approval of your leadership and the way you lead the world's greatest democracy. Together we will continue to strengthen the great friendship between us and India and Israel and lead it to new heights," he tweeted.

#Russian President Vladimir #Putin made a telephone call to Prime Minister of #India @narendramodi to congratulate him on the resounding victory of #BJP in the general parliamentary elections.

From a long standing friend!

Russian President Putin has sent a congratulatory message to PM @narendramodi and has confirmed his readiness to work together to build up the full range of bilateral relations and constructive interaction in international affairs.

Congratulations to @narendramodi and the #NDA on your sweeping victory! The United States looks forward to working closely with our strategic partner #India in the years to come. #USIndia pic.twitter.com/thmcNvJeRY

Indonesian President Joko Widodo, who was re-elected earlier this week,  tweeted his congratulations, tagging the tweet of Modi congratulating him.

Thank you PM @narendramodi for the kind words. I, too, look forward to continue strengthening the partnership between our two great countries in the future. https://t.co/Y5DdAvGHPC

Congratulations to PM @narendramodi on his historic victory in the Indian general elections. It is a strong affirmation of the Indian people's confidence in the BJP/led government. I look forward to closer and enhanced ties of Maldives-India cooperation.

Sri Lanka President Maithripala Sirisena congratulated PM Modi on his victory and the "peoples re-endorsement of your leadership". He said Colombo "looks forward to continuing the warm and constructive relationship with India in the future".

Congratulations on your victory and the peoples re-endorsement of your leadership.
Sri Lanka looks forward to continuing the warm and constructive relationship with India in the future.@narendramodi