The official data released on Friday show that India's second-quarter GDP growth has slumped drastically to '4.5 per cent' and is at its lowest in over six years. 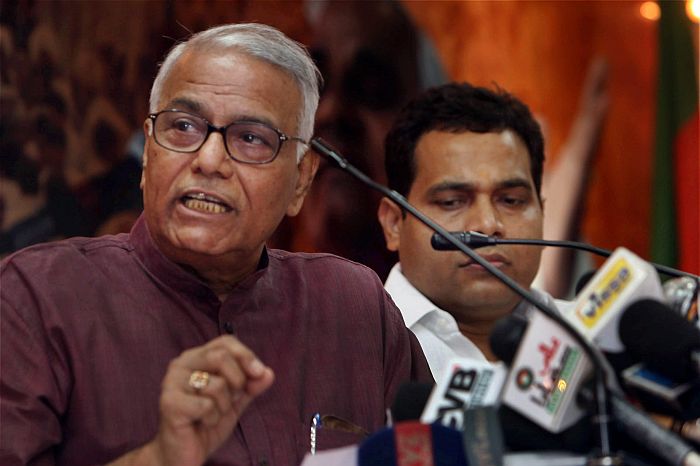 India's economy is in a "very deep crisis", witnessing "death of demand", and the government is "befooling people" by its "brave talks" that the growth would be better in the next quarter or the one after that, said former Finance Minister Yashwant Sinha on Sunday.

The official data released on Friday show that India's second-quarter GDP growth has slumped drastically to "4.5 per cent" and is at its lowest in over six years.

"No matter what the powers that be say, the fact is that we are in a very deep crisis.

"This type of crisis takes a long time like three to four or even five years (to subside). It cannot be resolved at the drop of a hat or by wielding a magic stick," said the former BJP leader.

Speaking here on the last day of Times LitFest, Sinha noted that India's economy right now was witnessing what is called the "death of demand" and that the "starting point of it" was the agriculture and rural sector.

"There is no demand in the economy and that is the starting point of the crisis. They (government of the day) are least bothered about what is happening to our farmers, people living in rural areas, now that is where the death of demand started from.

"The demand first dried up in agriculture and rural sector, then it dried up in the informal or unorganised sector, and ultimately it travelled to the corporate sector," he said.

The 82-year-old also recalled how he foresaw the "downward spiral" in the economy way back in 2017, but how his warning was dismissed then as a rant by an 80-year-old man "looking for a job".

"Twenty-five months ago I wrote a piece in a leading newspaper and warned the government of the downslide that I could see coming in the economy. My purpose was to tell those who were managing the economy then that the time to take corrective steps is now, but that did not happen.

"In fact, this was something I had done after already warning them (people in the government) personally through letters, personal meetings... it is only when the party's doors were closed on me that I had to start speaking publicly," he added.

Sinha, who joined the BJP in the 90s, had quit the party in 2018, alleging that the "democracy in India is in great danger" under the leadership of Prime Minister Narendra Modi.

The bureaucrat-turned-politician asserted that not only the economy but the country's whole "public life" is currently passing through a crisis.

"Ten or 20 years ago I could not have imagined that we will have somebody in the Lok Sabha calling Nathu Ram Godse a patriot... these are the signs of the times we are living in.

"All the conventions and all our institutions are facing a severe threat today, so here I ask all of you to realise the danger we are facing as a nation and to resolve to protect the idea of India -- the one that we have known through the centuries," he added.

Poured Whiskey Into Her Mouth To Silence Her: Police On Telangana Vet's Rape-Murder