'What Game Was Being Played' In 1964? PM Modi Lambasts Congress Over Article 370

Modi said it was the BJP government which abrogated provisions of Article 370 while the Congress was only concerned about taking care of 'two families' in Kashmir. 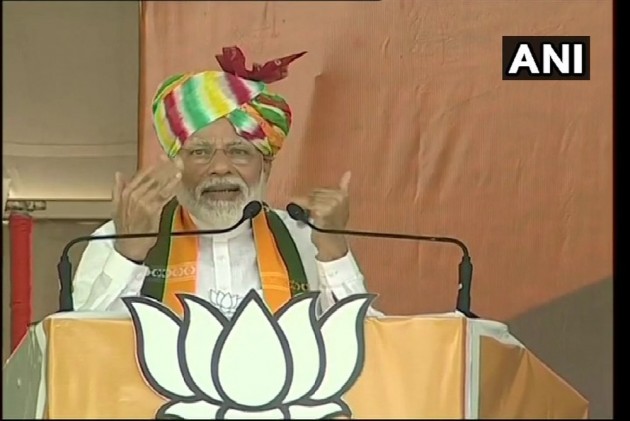 Continuing his diatribe against Congress, Prime Minister Narendra Modi on Saturday accused its leaders of failing to abrogate Article 370 despite having promised it in Parliament in 1964.

He was addressing a rally in Rewari on the last day of campaigning for the Haryana assembly polls.

"During a debate in Parliament in 1964, the country's distinguished leader got upset… there was division in the Congress. There was a demand that Article 370 be nullified and there be a debate on this issue in Parliament," he said.

"At that time, Congress leaders, with folded hands, had said that their demand would be met and Article 370 would be nullified in one year. But the matter was again put on the back burner," said Modi while addressing his second rally of the day.

"What was the compulsion and what game was being played," he asked, urging people to punish the Congress for it in the assembly polls.

He also attacked the opposition party, claiming that it did not build any memorial for jawans and policemen who sacrificed their lives for the nation for 70 years.

Only the BJP government built such memorials for them, the PM said.

He said it was the BJP government which abrogated provisions of Article 370 while the Congress was only concerned about taking care of "two families" in Kashmir.

"They did not allow nurturing of any political party there," he alleged, claiming that the Congress and its supporters were only concerned about their "chairs", not about Kashmir.

"The limits were crossed when they opposed this move (abrogation of Article 370) in overseas countries like those who were behind spreading terrorism," he alleged.

"This is their mentality. Those who opposed this move are seeking votes from you. You need to punish them," he asked people.

Modi said the BJP government had strengthened the armed forces by bringing in modernised weapons, Rafale jets and bulletproof jackets for soldiers.

"We are now producing bulletproof jackets and also been exporting them to other countries," he said, adding that the Congress government used to shiver at threats by terrorists and separatists.

"You tell me. Do you find India strong now? Terrorists are being killed in their den. Today, those who shelter terrorists are crying across the world. Those who used to scare us are now looking terrified," Modi said.

The prime minister said under the One Rank, One Pension (OROP) scheme, which was implemented by the BJP government, a sum of Rs 900 crore was given to around two lakh ex-soldiers in Haryana alone.