The 70-year-old actor-turned-politician is canvassing for BJP candidates in the formerly Maoist-affected Junglemahal region. 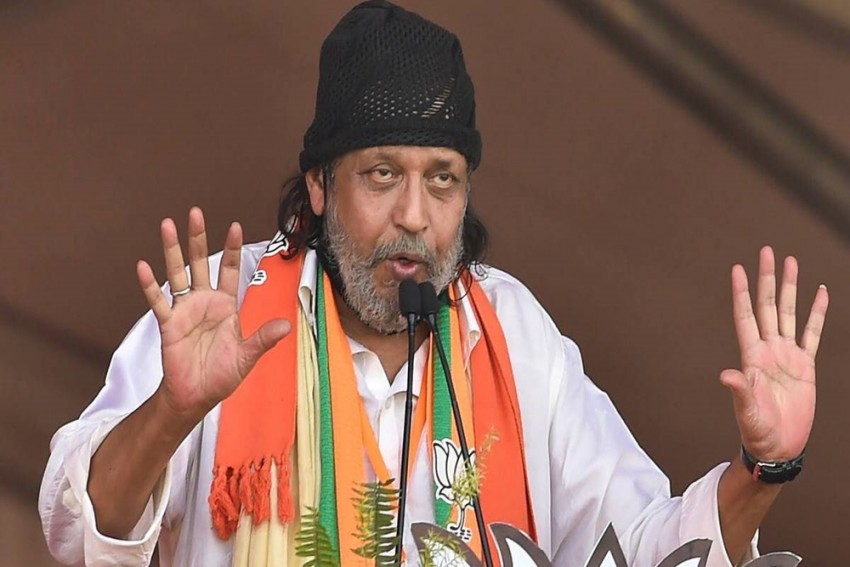 The 70-year-old actor-turned-politician is canvassing for BJP candidates in the formerly Maoist-affected Junglemahal region. He had joined the saffron party on March 7.

Around 84.13 per cent of the 73.80 lakh voters exercised their franchise in the first phase of voting in 30 constituencies on March 27, as per an updated EC report.

Sporting a grey kurta with a saffron scarf loosely hanging around his neck, Chakraborty undertook roadshows in different poll-bound areas in Paschim Medinipur and Bankura districts during the day.

Standing atop a saffron-hued MUV decked with marigold, he greeted people in his trademark style and the crowd cheered him back.

"The high polling percentage in the first phase affirmed that people of West Bengal want 'asol paribartan' (real change). It is coming.

"I can also feel the palpable enthusiasm among the people who have assembled for the roadshow," he told reporters at Indas in Bankura district.

He also held well-attended roadshows at Debra and Keshpur in Paschim Medinipur district.

Chakraborty said that people had voted the TMC to power to end the Left Front's oppressive rule but the wishes of the common man remain unfulfilled as tyranny continues unabated.

"You are threatened with water supply disconnection if you don't vote for a particular party. We want this era of threat to end. To bring 'asol paribartan', you have to vote for the BJP. Every vote is important," he told the participants.