Heavy Snowfall Cuts Off Kashmir Valley From Rest Of Country Heavy snowfall in Kashmir Valley has affected normal life with flights to and from Srinagar cancelled as Jammu-Srinagar highway continued to be closed for the third consecutive day today.

The Jammu-Srinagar highway, the only surface link connecting Kashmir with the rest of the country in the winter, remained closed for the third consecutive day today due to the continuous accumulation of 3.5 feet of snow at Jawahar tunnel.

Hundreds of vehicles, mostly trucks carrying essentials, including vegetables to the Valley, are stranded at several places along the highway. Another alternative route to the Valley, the Mughal Road, which connects Kashmir with Poonch district of Jammu, was closed for traffic during the winter months because of heavy snowfall at Peer Ki Gali and Bafliaz.

Kashmir Valley Wakes Up To Blanket Of Snow 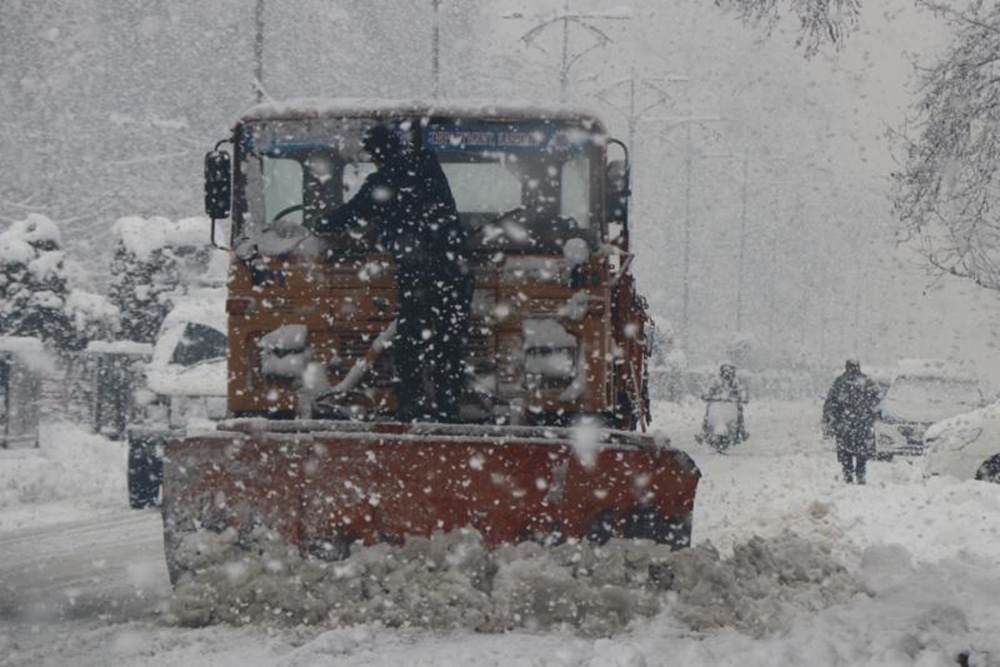 Heavy Snowfall has affected daily life in the Valley

The officials said around 20cm of snow have accumulated at the skiing resort of Gulmarg in the past 24 hours.

Capital city Srinagar also recorded 24cm of snow. Inter-district roads in the Valley also remained closed because of the accumulation of snow. The government has pressed around 200 snow-clearance vehicles to clear snow from the roads. But the going is proving tough because of the continuous snowfall, the workers said.

Sonam Lotus, director of the meteorological department, Jammu and Kashmir, said the present weather condition is likely to continue till early Wednesday. “We expect a significant improvement in the weather from tomorrow in Jammu and Kashmir,” Lotus said. He, however, said the cold wave will return to the Valley from January 7.

As three persons of a family died in north Kashmir’s Pattan and the police have started an investigation into the incident, Lotus asked people to open doors and windows frequently to ensure enough supply of oxygen in homes. He said poisonous gas from gas-heaters and coal bukharis are leading to asphyxiation.

The government has asked people to avoid using cars and other non-essential transportation for time being in view of heavy snowfall and facilitate unhindered snow-clearance operation.

“The snowfall situation as it exists in Srinagar district at the moment demands that non-essential vehicles are kept off the roads to facilitate smooth operations to clear the snow,” a government spokesman said.

The government has also ordered rationing of fuel as a “precautionary measure” amid continuous snowfall. The divisional administration has ordered issuing limited petrol and diesel besides LPG to the consumers.

Meanwhile, political leaders have asked the government to help people as heavy snowfall has damaged houses at several places.

“Due to heavy snowfall, the threat of widespread devastation on account of snow avalanches looms large in many areas especially the upper reaches of Kulgam and Shopian. The J&K administration must remain ready to deal with any eventuality & intervene immediately to mitigate the sufferings faced by people,” former Jammu and Kashmir Chief Minister Mehbooba Mufti said.

Power supply remained affected in south Kashmir’s Anantnag district for the second day. “It had just begun snowing when the electricity was snapped in our area. It has been more than 36 hours now and we only got to see the power for barely 30 minutes that too at intervals,” said Khalid Ahmad of Iqbal Market. He said usually the town gets surplus power during snowfall, as electricity is snapped in rural areas but this time it was not so. “If this is the power scenario of the main town imagine that of far-flung areas where it has snowed heavily and the infrastructure is damaged,” Ahmad said. Many locals said the patients who were bedridden at home and needed oxygen concentrators or cylinders were struggling to breathe for want of electricity. The government said electricity would be restored in a phased manner.