Due to the strong winds, the signage atop the stock exchange almost toppled, leading to an observer remarking that the "BSE" had crashed. 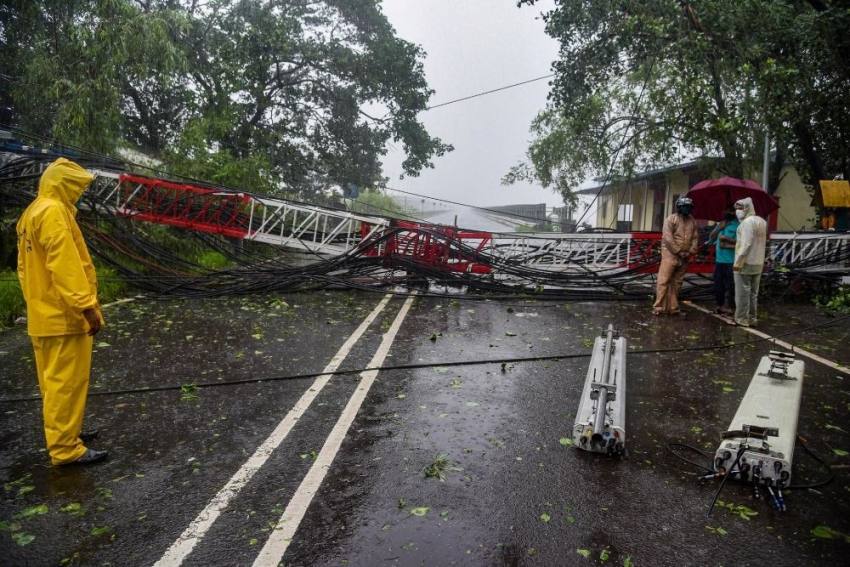 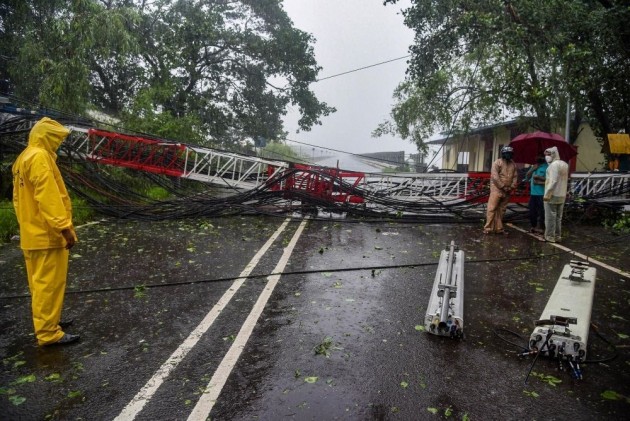 Gusty winds led to claddings flying off at the Jaslok Hospital in south Mumbai, while heavy rains prompted water-logging at the state government-run J J Hospital where doctors were seen wading through ankle-deep water.

The signage atop the stock exchange almost toppled, leading to an observer remarking that the "BSE" had crashed.

In Navi Mumbai, the canopy of the roofing of D Y Patil Stadium was uprooted by heavy winds, while three high capacity cranes at the Jawaharlal Nehru Port Trust (JNPT) in adjoining Raigad district collapsed in the afternoon, an official said.

"Due to high-speed winds, three key cranes fell at one of our terminals, but no one was injured in the incident," said Sanjay Sethi, chairman of JNPT.

He said the collapse of the cranes won't affect operations at JNPT, one of the biggest ports in the county located at Nhava Sheva in Raigad district.

The National Disaster Response Force (NDRF) rescued around 150 passengers from a local train stranded amid heavy rains between Masjid Bunder and Byculla stations in the evening.

Public transport in Mumbai and its surrounding areas, operating with limited capacity due to the coronavirus-induced lockdown, was disrupted due to water-logging on rail tracks and roads, officials said.

According to Railway sources, overhead wire and equipment were damaged near Charni Road station in Mumbai due to a tree collapse and a fire caused by sparks.

The MeT department warned of intense spell of 30 to 50 mm rainfall per hour with strong winds in Mumbai and suburban areas.

As per an alert issued by the India Meteorological Department at 6 pm on Wednesday, strong winds could reach up to 70 to 80 km per hour speed and occasionally gust to 100 km per hour in the next three to four hours.

Dahanu in Palghar recorded over 350 mm rainfall in the 12-hour period ending at 5.30 am on Wednesday, while some areas in Thane received over 150 mm during the period, the India Meteorological Department (IMD) said.

Water-logging was reported in low-lying areas of Chembur, Parel, Hindmata, Wadala and other areas of Mumbai.

The railway authorities suspended the suburban train operations between CSMT-Vashi stations on the Harbour line, CSMT-Kurla on the Main line and also between Churchgate and Kurla due to water-logging on tracks around Masjid Bunder, Kurla, Sion, Marine Line and other stations.

"Due to heavy rain and waterlogging, the train services on the harbour line between CSMT-Vashi and on the Main line between CSMT-Kurla have been suspended," chief spokesperson of the Central Railway (CR), Shivaji Sutar, said.

The Western Railway also announced on Twitter that due to heavy rainfall, all local train services between Churchgate and Mumbai Central stations have been temporarily suspended till further orders.

Train movement on the Western Railway route in Palghar was affected due to heavy rain in the morning.

There was "minor disruption" at Palghar from 5.40 am to 7.10 am due to 266 mm rain in two hours and hence, a few trains were regulated enroute, Western Railway's chief spokesperson Sumit Thakur said.

According to railway sources, suburban services were stopped due to water-logging on tracks at Palghar station.

Thakur, however, said despite heavy rains in various suburbs, the Western Railways suburban services were running normal between Churchgate and Dahanu Road.

Both the Central Railway and Western Railway have been operating nearly 350 special train services each daily for those working in essential and emergency services.

Bus services of the Brihanmumbai Electric Supply and Transport (BEST), the city civic body's transport wing, were also affected due to water-logging on some roads.

A BEST spokesperson said their services were diverted on more than 30 routes, including two locations in Thane district, till 9 am.

Chief Minister Uddhav Thackeray asked people to stay indoors and venture out only for essential work.

He took stock of the situation and asked the BMC to coordinate with the police and railway authorities, health machinery and NDRF to ensure that citizens do not face any hardships.

Besides, the weather station at Bhayander in Thane recorded 169 mm rainfall while the one at Mira Road reported 159 mm during the same period, he said.

As per the IMD's website, Thane city, Dombivli and Kalyan areas, which are part of the Mumbai Metropolitan Region (MMR), received more than 120 mm rainfall during the same period.

Teams of the NDRF have been stationed at both Thane and Palghar to deal with any eventualities, NDRF commandant Rajendra Patil said.

Parts of south Madhya Maharashtra and adjoining Marathwada region are also likely to get very heavy rainfall, along with intense spells, he said.

"With formation of low pressure area on Tuesday in North Bay, as forecast by the IMD, it has resulted into strengthening of lower level southerly winds over Arabian sea. It has brought heavy to very heavy rainfall at isolated places in and around Mumbai," Hosalikar said.

Pune district received 59 mm rainfall in the last 24 hours and it is likely to witness moderate to isolated heavy showers in next two days, an IMD official said.

The catchment areas of four dams - Varasgaon, Khadakwasla, Panshet and Temghar which provide water to the city - received good rainfall.

The Koyna dam in Satara district of western Maharashtra, which generates around 2,000 MW of power, received as much as 6 TMC water in just last 24 hours due to heavy showers in its catchment areas.

The catchment areas of the Koyna dam have been receiving extremely heavy showers. Mahabaleshwar (a hill station in Satara district) received 320 mm rainfall followed by Koynanagar and Navaja, which received more than 230 mm rainfall each, an official said.

The Kolhapur district administration asked the people living on the banks of the Panchganga river to remain alert and shift to safer locations in view of heavy rain in the last two days.