In March this year, Union Labour Minister Santosh Singh Gangwar replied to a question and said, “The government neither has an estimate for internal migrants nor has it conducted any study to assess the living standard, health, safety of migrant workers.” 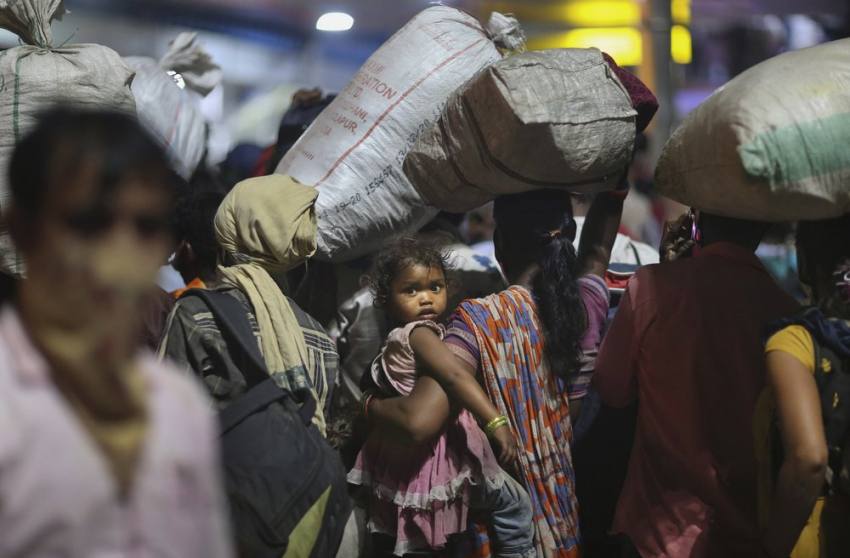 AP Photos
File photo of migrant workers line up to board trains to their home states at a railway station in Hyderabad during nationwide lockdown.
Rajat Mishra 2020-09-16T17:17:17+05:30 ‘Hawai Safar’ To The Great Indian March: How India Failed Its Poor Migrant Workers?

PM Modi’s defining statement of April 2017 attracted a fair share of praise for his pro-poor vision “Main Hawai Chappal Walo Ko Hawai Jahaaz Main Safar Karte Dekhna Chahata hu” and cut to 2020, multiple visuals from highways during the pandemic induced lockdown showed, poor labours died awaiting services of basic modes of transportation to reach home in their own country. The closed state borders shoeing migrants away were some of the many chilling testimonies of the stark rich-poor divide that will keep on haunting this government forever. Now, Labour Minister Santosh Kumar Gangwar’s clarification in the parliament yesterday which is facing a lot of backlash has already made the government's failure public by saying that the government is not having any data of the migrant’s death and no data of migrant workers under ISMW Act.

As per the census of 2011, there are roughly around 450 million internal migrants in India, which is a significant jump by roughly 30 per cent in comparison to the census of 2001. And this particular case of reverse migration has already uncovered, how wide fissures and cracks are entrenched in our administrative system, how well-oiled law and order system went for a toss even in this perilous situation, and how states disowned their people?

There is not an iota of doubt that India has never run short of its laws but always scrambled and struggled to have proper implementation of them, and the case of reverse migration had shown that this crisis was a by-product of ignorance of the laws dealing with migrant workers from ages. Inter-state Migrant Workman (Regulation of Employment and Condition of Service Act 1979) is a few among many laws dealing with migrant workers. ISMW Act 1979 is an act of the parliament of India enacted to regulate the condition of interstate labourers in Indian labour law. Both laws are aimed at proper documentation of all inter-state migrants but that intended objective always remained a utopian dream. ISMW Act 1979 applies to every establishment in which five or more interstate migrant workmen are employed on any day of the preceding twelve-month and every contractor who employs five or more inter-state migrant workers. Thus with this act, it is mandatory for the employer to make an application to the registering officer for the registration of establishment and to maintain the registers indicating the details of interstate workers and make them available for scrutiny by the statutory authorities.

In March this year, Union Labour Minister Santosh Singh Gangwar replied to a question and said, “The government neither has an estimate for internal migrants nor has it conducted any study to assess the living standard, health, safety of migrant workers.” The question asked was about the number of migrant workers in India and is the implementation of the ISMW Act of 1979 monitored by the centre?

But Gangwar’s reply was not to anyone’s amazement because If all states would have implemented ISMW act in letter and spirit, then the chief labour commissioner would have had full data of immigrant workers at district and state level and then those unfortunate accidents, which claimed lives of more than 200 migrant labours would have been avoided and some lives would have been saved. But these laws just remained confined to the law books and did not see the light of the day.

As per the Standing Committee Report of 2011, on Interstate Migrant Workman Act presented in Lok Sabha has put forward some astounding numbers. According to this report, in Maharashtra, the number of principle employer registered under ISMW act stands at 10 while no of contractors registered was 17. On the flip side, according to a report based on Annual Survey of Industries 2008-2009 & 2009 -2010, which covers all factories registered under Factories Act of 1948 and Bidi and Cigar workers act of 1966, reveals that there were 23,430 factories in Maharashtra employing 14.44 lakh people and in 2009-10 there were 20,838 factories functional in Maharashtra. So, the gap of factories registered under ISMW Act as per the standing committee report of 2011, and functional factories on the ground as per the annual survey of industries in Maharashtra is so wide that lays bare the poor implementation of ISMW act by the states and with no data of labours working there.

On April 8, 2020, after the country was put under 21 day nationwide lockdown and when migrant workers started travelling to their state, the office of Chief Labour Commissioner issued a circular to its regional heads in 20 centres across the country to collect data about every stranded migrant worker in every district and state. That circular in itself stipulated the template for capturing data. The regional heads were given three days to gather data. On April 21, after 13 days of the circular, RTI activist Venkatesh Nayak submitted an RTI seeking the state-wise data of stranded labours received from regional labour departments. And on May 5, in an answer to this RTI, CPIO’s reply came in, which said: “As per stat section is concerned, no such details are available based on requisite information.” So, that one-liner reply raised serious questions about the enumerated exercise.

To clarify further, in April, we spoke to the Joint Labour Commissioner, Bihar, who accepted the fact that the department as of now have no data about migrant workers employed in various states and they are compiling it now. We also reached out to the Additional Labour Commissioner, Madhya Pradesh, who said that he is not authorized to answer any of our questions. We tried reaching out to Central Labour Commissioner, but our request did not elicit any response. However, one factory owner based out in Haryana, on the condition of anonymity, said that the majority of factories do not register under ISMW Act, 1979 and he also added that the factories never employ migrant labors on payroll with the condition of paying the laborers some extra bucks. Thus he said that is how the gap between actual factories on the ground under the Factories Act of 1947 and ISMW act of 1979 comes in. This phenomenon is quite evident in the data gathered by Stranded Workers Action Network (SWAN), the network of 70 volunteers interacted with 11,159 stranded workers which were split into 640 groups since March 27. SWAN report says: “Millions of migrant workers are not on any official payroll, 89 per cent of those surveyed have not been paid by their employer at all during the lockdown.”

Throwing light on its implementation, Pooja Ramchandani, who heads the labour and employment practice of the firm, Shardul Amarchand Mangaldas & Co, New Delhi, said: “Interstate Migrant workmen act has many good provision that includes displacement allowances and others but the current migrant's crisis is indicative that the act is not implemented well, otherwise we would have all important data related to the migrant workers. Another problem is of the awareness, as of now, migrant workers are not aware of their rights. Any law would play its role if people would know when to invoke it. So, the law would have come to serve justice if it would have been compiled and the migrant workers had the means to implement their rights.”