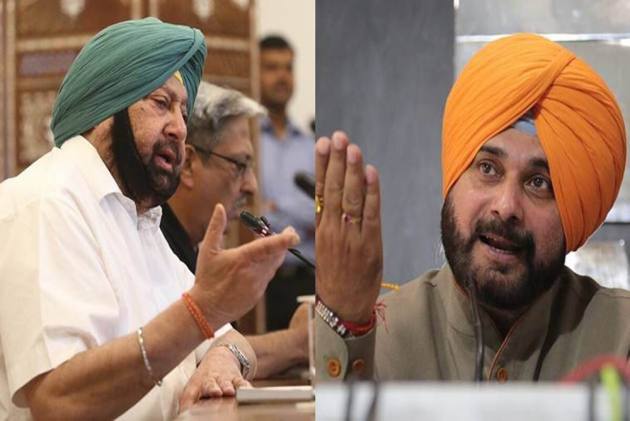 Chief Minister Captain Amarinder Singh’s acceptance of the invite to attend Navjot Singh Sidhu’s installation ceremony as the new Punjab Congress chief in Chandigarh later today has triggered heavy speculations of a possible ceasefire between the two rivals. For several months now, the two had left no stone unturned to undermine each other.

Interim Congress president Sonia Gandhi’s decision to appoint Sidhu as the Punjab Congress chief despite stiff resistance from Singh had, for the past five days, kept the political grapevine abuzz with speculation on the Captain’s next move. Singh has, even after accepting Sidhu’s invite for today’s ceremony, refrained from publicly congratulating his bitter rival on the new role. Sidhu too has refused to oblige Singh on the latter’s demand of a public apology for the “personally derogatory social media attacks” against him. Though Sidhu did invite Singh for today’s ceremony at Chandigarh’s Congress Bhawan he did so through a letter and not a personal audience.

Sources close to the CM tell Outlook that the former cricketer had, in fact, not even sought an appointment with Singh to extend the invitation personally. The text of Sidhu’s letter too shows no inclination on his part for a rapprochement and, barring a perfunctory reference to Singh as “the eldest of our Punjab Congress family”, harps largely about his political austerity and seeks to rub in the fact that Sonia chose him as the new Punjab Congress chief. “As you know, Hon’ble Congress President Smt. Sonia Gandhi Ji has appointed me as President Punjab Pradesh Congress Committee,” Sidhu’s letter says. It then goes on to mention, “My resolve and commitment on Punjab’s issues and fulfilling High Command’s Pro-People 18 Point Agenda for the welfare of every Punjabi is well known to you and all. I am and will remain steadfast on that commitment with the blessings of the Congress party workers. I have no personal agenda, only a pro-people agenda.”

Battle For Punjab: Will Sidhu Team Up With Kejriwal to Beat Captain Amarinder?

The CM’s close aides conceded, on condition of anonymity, that the tenor of Sidhu’s letter was “boastful” and “not what one expects from someone seeking reconciliation”. A senior party MP, who had joined Singh’s cause in opposing Sidhu’s appointment as the PCC chief, also pointed out that “even the gesture of the two new working presidents (Sangat Singh Gilzian and Kuljit Singh Nagra) who called on the CM to invite him personally appeared more like a show of strength by the Sidhu camp as it was signed by 56 of our 80 MLAs in what looked like a clear message to the CM that despite his resistance a majority of our MLAs stand with the new appointees”.

That Singh has steadily been losing his loyalists in the Congress legislative party to the Sidhu camp has been a matter of much speculation ever since Sidhu was declared as the Punjab Congress chief last Sunday. While Singh and at least nine of the party’s 11 parliamentarians from the state refused to publicly congratulate the five new office bearers – Sidhu and working presidents Nagra, Gilzian, Sukhwinder Singh Danny, and Pawan Goel – the former cricketer personally called on a majority of the party’s 80 MLAs in Punjab and other senior leaders. This outreach was followed by Sidhu’s bus ride to the Golden Temple and the Durgiana Mandir in Amritsar along with over 60 Congress legislators.

Party leaders say the decision of the Gandhis – Priyanka Gandhi Vadra, in particular – to stand firmly behind Sidhu despite Singh’s opposition and objections from senior party MPs like Partap Singh Bajwa, Manish Tewari, Santokh Chaudhary, Ravneet Bittu and others had forced many MLAs considered close to Singh till a week ago to reconsider their loyalties. A large chunk of MLAs who until last week were either opposed to Sidhu’s leadership or were non-committal on working under him had, since Sunday, gradually distanced themselves from the Captain and displayed their fealty to the loquacious Amritsar East MLA.

Congress sources caution that the steadily swelling support for Sidhu among the party’s MLAs is, however, not to be construed as a sign of enduring loyalty to the new PCC chief but be seen through the prism of political expediency. “Many of them, including several ministers who are now moving to Sidhu, won the 2017 election purely because of Singh and went on to hold important posts in the party and the state cabinet. If they couldn’t remain loyal to Singh, how do you expect them to remain loyal to Sidhu,” said a party veteran. He added, “the MLAs deserting Singh now realise that Sidhu is the new boss and as the confidence of the high command… many of these MLAs have become unpopular in their constituency and are facing anti-incumbency… they know they may not be given tickets to contest the polls again and so are trying to show their support for Sidhu in the hope that he will bat for them when the candidate selection process begins.”

Rumour has it that the ostensible ceasefire is the result of ongoing efforts by the Gandhis to somehow get Singh and Sidhu to work together ahead of next year’s assembly polls. Additionally, former Congress chief Rahul Gandhi, sources say, has personally intervened to pacify his party’s MPs from Punjab who has been upset at Sidhu’s appointment. Harish Rawat, the party’s general secretary in-charge of Punjab, too has been repeatedly conveying to all party MLAs that Sidhu has the high command’s blessings and any possible revolt against him would be akin to a mutiny against the Gandhis.

None of this bodes well for Singh who now not only has to accept his bête noir as the new face of the party in the state but also his diminishing grip over several party colleagues who, till very recently, lined up before him to pledge fealty. For Singh, who will turn 80 years old by the time Punjab goes to polls in March next year, accepting Sidhu as the new Captain of the team will certainly be a bitter pill to swallow. For over two decades, particularly from 1999 onwards, he has straddled Punjab’s politics as the Congress’s tallest leader. Those who have known him as a politician vouch for Singh’s combative leadership style that often rubs many, including his own party colleagues, the wrong way and as a no-nonsense, unyielding, and often autocratic satrap. For him to walk into the sunset without putting up one last fight to ensure that his legacy isn’t trampled over by a cricketer-turned-politician who joined the Congress less than five years ago, goes against everything that Singh has stood for, despite his public declarations of accepting the high command’s diktats.

Singh has invited all Punjab Congress MPs, MLAs, and senior leaders for tea at 10 AM today at the Punjab Bhawan in Chandigarh from where he will accompany all his colleagues to the Congress Bhawan for the installation of the new Punjab Congress team. If Sidhu and his newly minted coterie did not have a sound sleep last night due to nervous anticipation of what Singh may say about the humiliation he has faced from the new PCC chief or the betrayal of his once-loyal MLAs, it would likely be because they are aware of Singh’s capacity to nurse a grudge. Will the Maharaja of Patiala, a proud military man, swallow his pride, forgive and forget the embarrassment and betrayals he has faced in recent weeks? Will he embrace his arch-rival, wish him luck and accept him as his Captain?