Harassment Of Health Workers Fighting Coronavirus And The Way Out

Several people in different parts of the country have voiced their deep-seated resentment by challenging health workers entering their lanes covered in special suits to asses the situation in the wake of Coronavirus. 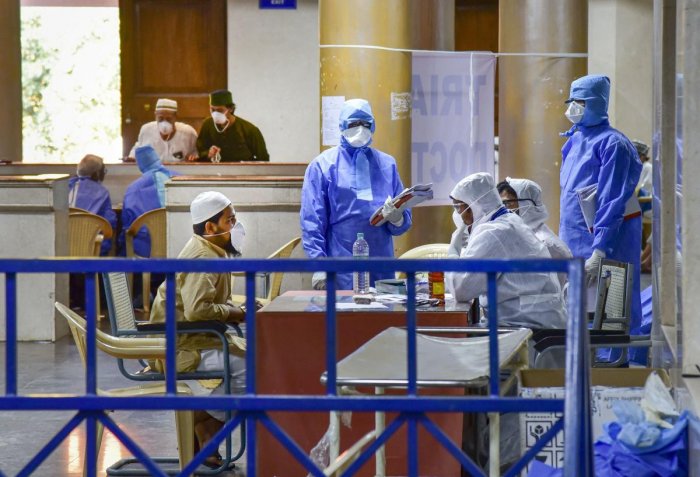 Medics interact with an Indonesian tourist at COVID-19 helpdesk, in the wake of deadly coronavirus, at Hyderabad Gandhi Hospital
PTI Photo
Outlook Correspondent April 07, 2020 00:00 IST Harassment Of Health Workers Fighting Coronavirus And The Way Out

There have been growing reports of health workers being heckled and harassing during their visit to housing colonies to identify coronavirus cases and survey the area.  An in-depth examination is essential because the ire against health workers is not limited to one state or region; it is happening across the country. There is a chance this trend of heckling might spread to more areas making the fight against the disease even more difficult.

The government has now signaled it has felt the need to re-examine its own responses. This is what explains the Prime Minister’s phone calls and consultation with opposition leaders on day 12 of the 21-day lockdown. Even the release of political prisoners in Kashmir could be linked to this self-realization in the North Block.

A large section of the people already felt alienated during the agitations sparked off by the Citizenship Amendment Act and NRC controversies. Shaheen Bagh in Delhi, where women staged possibly the longest demonstration in the history of independent India, became the symbol of peaceful protest for millions of Muslims and many Hindus who supported their cause.

What followed is the Coronavirus pandemic and the government seeking the cooperation of all sections of the society in a nationwide effort to challenge it. The purpose is to check the process of community transmission.

Even as most of India clapped on the day of Janata Curfew and lit lamps and candles on day 12 of the lockdown, there were sections of the population who wondered if they were being included in the government’s efforts.

The Prime Minister’s references to Hindu symbols like “Laxman Rekha” and lighting Diya did not help when it came to communication with some sections of the minorities. The communication was lost even among millions of Hindu migrant workers who rushed out of major cities immediately after Modi’s announcement of Janata Curfew. Clearly, the problem of public trust extended beyond minorities.

Did we see hundreds of legislators and local-level leaders from political parties rush out to connect with migrant workers and reassure them about the government’s determination to shelter and feed them instead of leaving it to the police to deal with the situation? If they did, the Prime Minister’s message would have gone further and a dangerous situation averted.

For the first time, health workers were seen as a symbol of the government. It is usual for the police to be seen in this role and suffer the ire of angry crowds in different parts of the country.

The crisis has come at a time of political turmoil and rising unemployment. The fight against the disease should not be seen as a mere medical issue. It needs to be dealt with at the economic, political and social levels as well.

A good way to resolve the problem is to involve influencers and public leaders of all kinds. The Prime Minister has made a beginning by seeking the cooperation of religious leaders and phoning opposition leaders. The circle of communication needs to expand to include teachers, student and panchayat leaders, and workers engaged in civil society.

The Prime Minister must hold separate video conferences with religious leaders, particularly among the minority sections to overcome mistrust and make them feel that the government belongs to everyone on an equal level.

He should also hold live conversations with at least 500 leaders in the NGO movement who will have useful suggestions on handling the crisis. There is no better way for political leaders to reduce their dependence on the bureaucracy than talking to NGO workers with ground-level experience and no fear of being suspended from service.