Home  »  Website  »  National  »  From MH370 Tragedy To Kerala Plane Crash: A Look At The Major Air Accidents Of This Decade

From MH370 Tragedy To Kerala Plane Crash: A Look At The Major Air Accidents Of This Decade

Here is a list of the major plane crashes that have occurred in the last one decade. 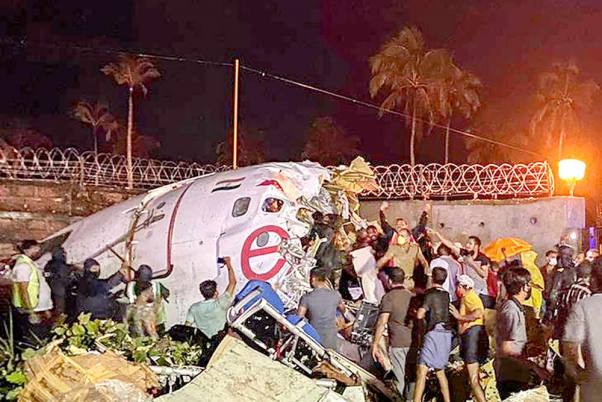 Air India Express flight with passengers on board en route from Dubai skidded off the runway while landing, at Karippur in Kozhikode.
PTI Photo
Outlook Web Bureau 2020-08-07T23:20:00+05:30 From MH370 Tragedy To Kerala Plane Crash: A Look At The Major Air Accidents Of This Decade

Sixteen people were killed and several others injured when a Dubai-Calicut Air India Express flight with 191 passengers and crew on board overshot the runway at the airport here and fell into a valley, breaking into two portions, on Friday evening.

Here Are Some Of The Major Plane Crashes In Recent Years:

A Pakistan International Airline aircraft with 107 people on board crashed in May near a residential colony close to the Karachi Airport, killing 97 people.

A Ukrainian airplane carrying 176 people crashed On January 2020 after takeoff from Tehran's main airport, killing all on board. The plane carried 167 passengers and nine crew members from different nations on its flight to the Ukrainian capital, Kyiv.

Ethiopia's state broadcaster said all passengers on the Ethiopian Airlines plane that crashed shortly after takeoff from Addis Ababa are dead.

12 people aboard were killed in a plane crash in Colombia, said the country's Special Administrative Unit of Civil Aeronautics.

The plane was identified as a Douglas DC-3 registered at the airport in the city of Villavicencio.

An Indonesian Lion Air plane Boeing 737 with 189 people on board crashed into the sea moments after it had been asked to be allowed to return to Jakarta. The crash killed all people on board.

Five people were killed after a chartered plane crashed near an under-construction building in Ghatkopar.

The post-mortem report of the people who lost their lives in the plane crash in Ghatkopar highlighted 'shock due to burn and poly-trauma' as the cause of death.

The Dhaka to Kathmandu Flight BS211, with 67 passengers and four crew members on board, caught fire after it careened off the runway and ploughed into a football ground near the Tribhuvan International Airport in Kathmandu.

The crash was recorded as one of Nepal's worst aviation disasters in more than 25 years.

An investigation revealed that the lead pilot was smoking continuously inside the cockpit during the one-hour flight from Dhaka to Kathmandu.

On December 6, 2016, PIA flight PK-661 carrying 48 passengers and crew had crashed on the way to Islamabad from Chitral, killing all on board.

Malaysia Airlines Flight 370 carrying 239 people from Kuala Lumpur to Beijing vanished on March 8, 2014, and is presumed to have crashed in the far southern Indian Ocean.

Five years on from the plane's disappearance, Malaysia is open to restarting the hunt for Flight MH370 if firms come forward with credible leads and concrete proposals.

Indonesian investigators' final report showed a chronically faulty component in a rudder control system, poor maintenance and the pilots' inadequate response were major factors in what was supposed to be a routine flight from the Indonesian city of Surabaya to Singapore.

Ethiopian Airlines' flight 409 caught fire five minutes after take-off from Beirut and plummeted into the Mediterranean two miles off the Lebanese coast, killing all 89 passengers and crew on Jan 25, 2010.

In one of the country’s worst aviation disasters, more than 160 people were killed when an Air India Express flight from Dubai overshot the runway at Mangalore airport, fell into the gorge adjoining it and exploded after catching fire early on Saturday morning.

Miraculously eight passengers survived the crash. But it was a day of death and doom at one of country’s most beautiful airports, though its runways are precariously perched atop a plateau on Eastern Karnataka . Pilots call them tabletop runways with their two ends dropping off into thick green gorges.

As Flight IX-892, a Boeing 737-800, with 169 people on board was cleared for landing at 6.05 am (25 minutes ahead of schedule) and approached the runway nothing was amiss as visibility was a healthy 6 km and the concrete runway was dry. But the pilot, Zlatko Eluscia (53), a British national of Serbian origin, who had 10,000 hours of flying experience, apparently miscalculated the touchdown zone according to airport sources.