The grand spectacle which attracts nearly a million people to Puri may not be held this year. 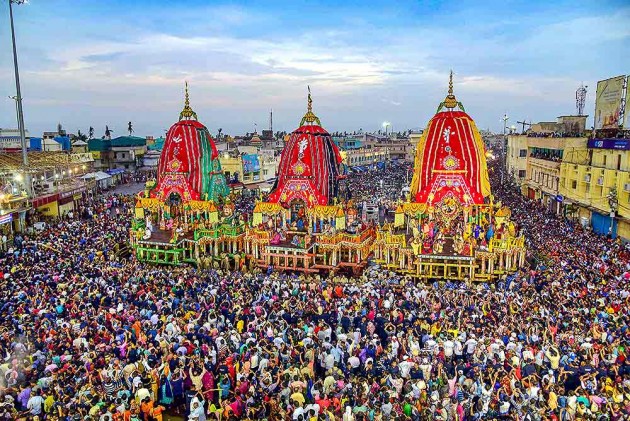 Millions of Jagannath devotees are keeping their fingers crossed as uncertainty looms large over the conduct of the annual Rath Yatra for the first time in 284 years due to the coronavirus pandemic and the nationwide lockdown.

It is, however, nearly certain that the grand spectacle, which is a high point in the temple calendar cannot be held this year.

The Rath Yatra, which draws nearly a million people from across the world and sees frenzied devotees pull the raths (chariots) of the three deities – Lord Jagannath, Lord Balabhadra and Devi Subhadra - on the Grand Road, is supposed to take place on June 23 this year.

As Odisha Fights A Grim Battle Against Coronavirus, Govt Tries To Muzzle The Media

Not just the devotees, even those in charge of the conduct of the grand festival are keeping their fingers crossed. The temple authorities announced on Saturday that any decision on the conduct of the Rath Yatra will be taken only after the nationwide lockdown is lifted after May 3.

“It is up to the Central and state governments to take a call on whether to hold only a token Rath Yatra, in the presence of just servitors (priests) and officials, or none at all,” Puri Gajapati King Dibyasingh Deb, who heads the management committee of the 12th-century shrine, said after a crucial meeting. “We shall wait for the revised guidelines to be issued after the lockdown is lifted on May 3 before deciding on the issue,” he added.

The titular head and the First Devotee of the Lord, however, made it clear that the construction of the chariots cannot begin until May 3 due to the restrictions already in place.

However, a decision has already been taken to hold all important rituals leading up to the Rath Yatra, beginning with Akshaya Tritiya on Sunday, which marks the beginning of the construction of the chariots. The ritual will be held inside the temple premises till the lockdown is in place as per the advice of Jagadguru Swami Nischalananda Saraswati, the Shankaracharya of the Gobardhan Peeth, Puri.

The decision was taken after a delegation of the temple management committee, led by the Gajapati King and officials of the Shree Jagannath Temple Administration (SJTA) met the Puri Shankaracharya last evening.

“The Shankaracharya was of the view that none of the rituals connected with the Rath Yatra can be done away with. But since the lockdown is in force till May 3, it cannot be held outside as is done every year. Hence, the rituals scheduled till then will have to be done inside the Meghanad Pacheri (the tall boundary wall around the temple),” the Puri King said after the meeting.

Even the rituals leading up to the Car Festival like Snana Purnima, ‘anasara’ (when the Lord goes into a 14-day ‘quarantine’ after falling sick during the Snana Purnima) and Chandan Yatra are no small affairs. Thousands of local devotees converge on the pilgrim town to witness each of these events. Even the construction of the chariots, which was supposed to begin on Akshaya Tritiya day tomorrow and takes place in full public view right in front of the temple, draws a large crowd of curious devotees. No wonder most devotees are rather disappointed about the fact that the grand spectacle cannot be held on the scale it is organised every year.

“I have never failed to come to Puri and pull the chariot on Rath Yatra day in the last 28 years. I am very disappointed that I cannot partake of this unique and exhilarating experience this year ,” Bikash Ranjan Behera, a devotee from Kendrapara, told Outlook.

Not every devotee, however, is disappointed. Some do understand the gravity of the situation. “He is the Lord of Universe. And I am sure He would not want something that can harm the world and its people. I am perfectly happy with it if there is no Rath Yatra this year. Saving life is more important,” said Sanjulata Rout, a housewife in Bhubaneswar.

Asit Mohanty, a researcher who has written extensively on the Jagannath cult and the myriad temple rituals, is not in favour of doing away with the Rath Yatra altogether.

“The Rath Yatra has not been cancelled in the last 284 years despite the fact that the state has witnessed much bigger crises like the Naa’anka Durbhikhya (the Great Famine of 1766 which is believed to have killed millions of people) and the spread of cholera. So, it will be really unfortunate if the tradition is broken. But since we cannot ignore the threat of Corona, we can have a restricted Rath Yatra where servitors observe all the rituals, maintaining the Corona induced protocol while barring the people from taking part in it,” he said.

In case the Rath Yatra is held the way Mohanty has suggested, devotees will have the opportunity of watching it live on TV. But it will not quite be the same experience because it’s the million-strong crowd and their collective, frenzied and full-throated chants of “Jay Jagannath” are what give the grand event its epical flavour.