Terrorism is still prevalent (in J&K) contrary to their BJPs claim that we have finished it. If we want to finish it, we have to talk with our neighbour, says NC president 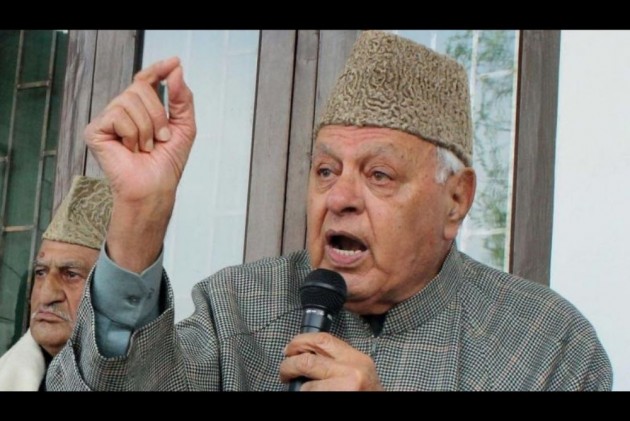 National Conference president Farooq Abdullah on Sunday advocated dialogue with Pakistan to end terrorism in the vally, Jammu and Kashmir. He asserted friendship holds the key to development in the region.

The former chief minister of the erstwhile state remembered former Prime Minister A B Vajpayee's words “you can change your friends but not your neighbours” and said “either we grow friendship and prosper or continue the enmity, then there will be no prosperity”.

“Terrorism is still prevalent (in Jammu and Kashmir) contrary to their (BJPs) claim that we have finished it. If we want to finish it, we have to talk with our neighbour,” Abdullah said.

He was responding to a question about the terrorist attack on police in Bhagat locality of Srinagar on February 19, which left two policemen dead.

“This is the reality of the day. I appeal to the government to adopt the same approach as they had with China over the standoff in Ladakh and started withdrawal of its troops. The same is needed here to pull out J&K from this (terrorism),” he said.

Abdullah said the world has shrunk and the country like rest of the world is fighting coronavirus. “We have to solve this issue as well.”

Asked whether he is hopeful of success of the ongoing Indo-China talks, the NC leader said “the issue is big because this line is not defined and so there are differences between the two powerful countries".

Responding to a question on increasing petrol prices, Abdullah said, “I want to request the government to review its decision and reverse the hike to allow the poor to live”.

“I heard they are buying it (petrol) at Rs 30 per litre and if they are selling it at Rs 100 per litre to the people, it is wrong. Where the middle class that has a fixed income would go? They have to run the household, pay school fees of their children, and take care of the sick as well. It (the government) has pushed the whole country into the crisis and needs to act fast to set it (petrol prices) right,” he said.

On August 5, 2019, the Centre revoked the special status of J&K under Article 370 of the Constitution and bifurcated the erstwhile state into two Union Territories.

He added had they done it across the country, National Conference would have gladly joined the exercise but they have picked up J&K deliberately, therefore “we are not with it”.

On the Rashtriya Bajrang Dal's demand for imposition of ban on the use of 'pheran' (a loose gown used by Kashmiris during winter to keep themselves warm during winter) after the assailant who attacked police was caught on camera wearing the garment to hide his weapon, Abdullah said "pheran is the identity of Kashmiris and if somebody has misused it, why defame it?”

“Without pheran, what can one do in minus 10 degrees Celsius? We hold the Kangri (fire pot) inside it. We don't even have the electricity,” he said, adding Kashmiris have worn the 'pheran' even at the time when militancy was at its peak and “we will never discard the pheran.”

He termed the attack on the policemen as tragic and said those behind it should be arrested and dealt with in accordance with the law of the land.

Earlier during the day, a group of Rashtriya Bajrang Dal activists staged an anti-Pakistan protest here over growing incidents of terror attacks and set ablaze the flag of the neighbouring country.

The protesters demanded a ban on the 'pheran'.