From Slain Cop’s House, Mehbooba Calls For Dialogue With Pakistan To End Violence

PDP president Mehbooba Mufti visited Logripora village in Aishmuqam to express condolences to the family of constable Suhail Ahmad, who was a father of two. 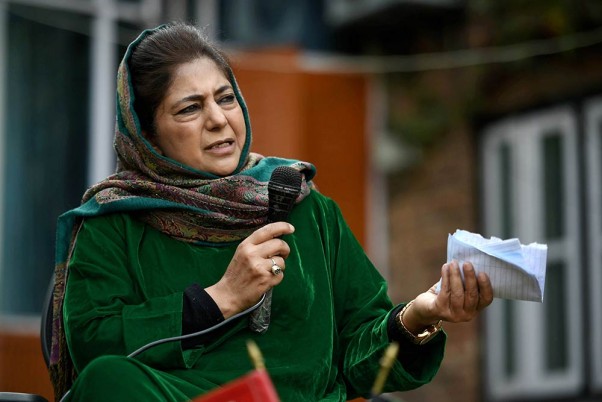 After visiting the house of a policeman, who was killed by militants on Friday, former Chief Minister and the PDP president Mehbooba Mufti today called for the Center to initiate dialogue with Pakistan.

PDP president Mehbooba Mufti visited Logripora village in Aishmuqam to express sympathies with the family of constable Suhail Ahmad, who was a father of two.

“Three police men were mercilessly killed yesterday within a few hours. The government of India should think about how long the people of J&K will continue to suffer like this. Policemen and others are getting killed and it is a big issue. To end this, the government should initiate talks so that people of J&K would remain in peace,” she added. “The government should initiate dialogue whether here or with Pakistan but they should start the process. The government is repeatedly saying that Pakistan was creating violence here. At least start the dialogue for stopping the violence,” she added. "Even graveyards are full in Kashmir now," she said.

Two policemen were killed in a militant attack in the Bhagat Barzulla area of Srinagar on Friday. The killing has evoked widespread condemnation. Former Chief Minister Omar Abdullah described the attack as "senseless and cowardly".

Mehbooba, while condemning the attack, said this cycle of violence serves no cause and begets only misery.

The video of the shootout, which has gone viral on social media, shows a militant opening fire at the unarmed policemen from the back in the broad daylight.

Friday’s attack was the second attack in the capital city Srinagar in the past three days. On Wednesday, militants shot at and injured the son of a restaurant owner Krishna Dahba in the high-security area.