In his Republic Day address Haryana CM Manohar Lal Khattar said the Constitution gives us rights, but these rights do not give us the ‘freedom to do anything’ 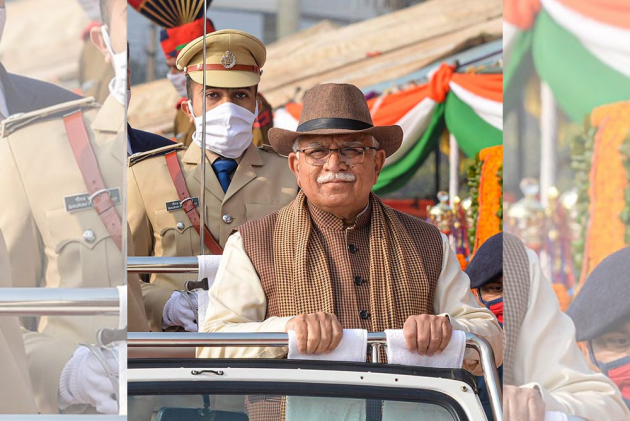 In an apparent reference to the farmers’ Republic Day tractor rally, Haryana Chief Minister Manohar Lal Khattar on Tuesday said that no one in the country has the right to spread anarchy.

Earlier today, a group of farmers had entered the Red Fort and hoisted their flag atop the iconic structure after the tractor rally entered central Delhi amid clashes on Tuesday. The Indian flag was untouched, only Nishan Sahib's flags -- a marker of Sikhism -- were hoisted by farmers on the poles. The police resorted to lathi-charge to vacate the Red Fort premises.

Prior to that, the farmers had deviated from the designated route for the proposed tractor parade against the new farm laws and moved towards ITO in central Delhi. Clashes broke out between police and protesting farmers after the latter reached ITO and tried to push towards Lutyen's Delhi, prompting the force to lathi-charge and tear gas the farmers. Read more

In his Republic Day address after hoisting the tricolour during a function in Panchkula, Khattar said the Constitution talks about rights, but these rights do not give us the “freedom to do anything” adding that “all citizens have to abide by the Constitution”.

Without directly mentioning the farmers’ protest, the chief minister said, “We are a democracy… On Republic Day, we were handed our Constitution. The Constitution makers talked about various rights with which we can make our lives happier. But I want to remind everyone that under the Constitution, both our rights and duties have been mentioned.

“... Our rights do not mean that we can do anything, there are some limits. And through these limits, we should remember that the Constitution which we have accepted, it becomes our responsibility to abide by it,” he said.

Khattar also cautioned against using the fundamental rights to “abuse” others.

“Therefore, while we have the freedom to do agitation, it does not mean we have freedom to take this agitation to anarchy,” he asserted.

Notably, the Haryana CM has been targeted by farmer unions for supporting the new farm laws enacted by the Centre in September last year.

Earlier this month, protesters had vandalised the venue of the kisan mahapanchayat in Haryana, where the chief minister had planned to address a rally in support of the laws in Karnal.

Thousands of farmers, mostly from Punjab, Haryana and western Uttar Pradesh, have been camping at several Delhi border points since November 28, demanding a complete repeal of the three farm laws and a legal guarantee on minimum support price (MSP) for their crops.

During his Republic Day address, Khattar also touched upon several “pro-farmer” initiatives taken by the BJP-led state government over the past six years.

“As far as procurement is concerned, Haryana is one such state which is procuring nine crops on its own at MSP. No other state has done so. In addition to wheat and paddy, be it cotton, bajra, maize, groundnut or moong, we are procuring these crops at MSP,” he said.

Under the 'Mera Pani Meri Virasat’ crop diversification scheme, the CM, said 80,000 acres of land under paddy cultivation have been given up and farmers were now sowing other crops.

He said the state has taken several steps to ensure that farmers get payment of their crops directly into their bank accounts, adding that 50 per cent of peasants were availing this benefit.