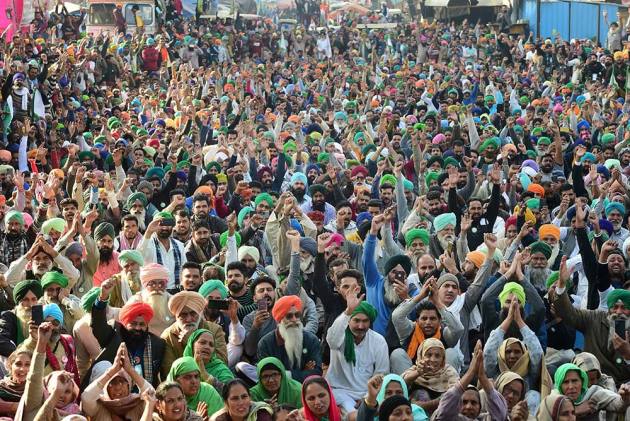 In a joint statement released by 16 opposition parties on Thursday, it was announced that the opposition parties will boycott the President's address to the joint sitting of Parliament on January 29 because of the ongoing farmers' issue.

The Opposition leaders expressed their solidarity with the protesting farmers and reiterated their demand for the repeal of the three new farm laws.

Announcing the decision, Leader of Opposition in Rajya Sabha Ghulam Nabi Azad said the 16 Opposition parties also demanded an independent probe into the Centre's role in the violence that shook the national capital during the farmers' tractor parade on Republic Day.

Farmers' Protest: All That Happened In The Last 48 Hours

The Opposition parties also demanded the repeal of the three farm laws and criticised the central government for remaining unresponsive to the demands of lakhs of farmers protesting against the agri laws.

"The prime minister and the BJP government remain arrogant, adamant and undemocratic in their response. Shocked by this insensitivity of the government, the Opposition political parties, reaffirming the collective demand for the repeal of the anti-farmer laws and in solidarity with the Indian farmers, have decided to boycott the president's address to both the houses of Parliament on Friday, January 29, 2021," said a joint statement issued by various parties.

The parties also said the government remains unmoved and has responded with water canons, tear gas and lathi charges on the lakhs of farmers agitating against the laws. Every effort has been made to discredit a legitimate mass movement through the government-sponsored disinformation campaign, they said.

The parties also said that though the protests and the agitation have remained peaceful, but there were some acts of violence on January 26 in the national capital, which was condemned universally and unequivocally.

"We also express our sadness over the injuries sustained by Delhi Police personnel while handling the difficult situation. But, we believe that an impartial investigation will reveal the central government's nefarious role in orchestrating those events," the parties said in the joint statement.

They said the new farm laws threaten the future of Indian agriculture, which sustains over 60 per cent of the country's population, and the livelihood of crores of farmers, sharecroppers and farm labour.

"The three farm laws are an assault on the rights of the states and violate the federal spirit of the Constitution. If not repealed, these Laws will effectively dismantle the edifice of national food security that rests upon - minimum support price (MSP), government procurement and public distribution system (PDS)," the statement said.

It also alleged that the farm bills were brought without any consultations with states and farmer unions, and lacked national consensus.

"Parliamentary scrutiny was bypassed and the laws were pushed through muzzling the Opposition, in brazen violation of Parliamentary rules, practices and conventions. The very constitutional validity of these laws remains in question."

Azad alleged that the Opposition has been against the manner in which the three bills were passed in Parliament and the demands of farmers not met.

"Those responsible for the violence should be punished and taken to task. The government would have to take responsibility that had it not shown arrogance and taken the laws back, these incidents would not have taken place," he said.

"We strongly believe that the government has miserably failed in handling the farmers agitation," the senior Congress leader said.

He alleged that the entire rules and regulations were "thrown in the dustbin" when the farm bills were passed in the last session, as a result of which the farmers took to the streets.

The Congress on Wednesday had held Union Home Minister Amit Shah responsible for the violence that shook the national capital on Republic Day and said he should be sacked immediately.

The Congress had also accused the Modi government of being a part of a concerted conspiracy to malign the farmers' agitation by allowing some miscreants to enter the Red Fort complex and hoist a religious flag, in their bid to ensure that the farmers bury their demand for the repeal of the three new agri laws.

President Ram Nath Kovind would address the joint sitting of the two Houses of Parliament on January 29 heralding the start of the Budget Session of Parliament.