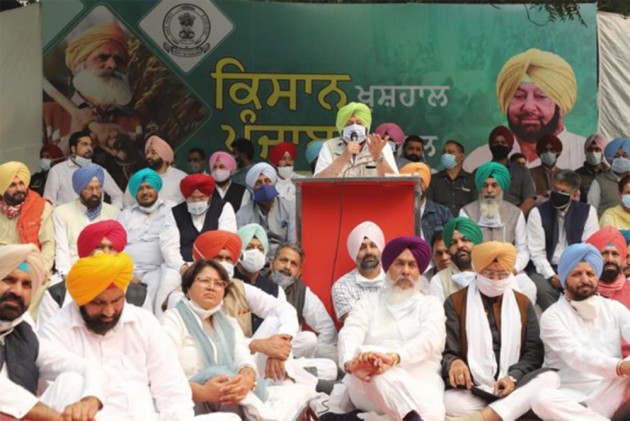 Punjab Chief Minister Amarinder Singh invited farmers protesting the new farm laws to take part in a meeting on Saturday, a day after seeking the Union government's support to create a "congenial environment" for ending their prolonged agitation.

"The farmers' bodies have been invited for a meeting by the chief minister in Chandigarh. In this regard, we have scheduled a meeting at Kisan Bhavan here on Saturday and whatever will be the consensus regarding the chief minister's invitation in that meet we will act accordingly,” Bharat Kisan Union (Dakaunda) state general secretary, Jagmohan Singh said on Friday.

With farmers refusing to allow movement of passenger trains in the state, Amarinder Singh had on Thursday urged the Centre to show magnanimity and not link restoration of freight services with movement of passenger trains. Singh had also urged the Union government to support his government in creating a congenial environment for ending the prolonged farmers' agitation, adding that the agitation had grave repercussions for the state and the nation.

The deadlock between protesting farmers and the Railways is ongoing over the issue of resumption of trains. Punjab farmers' bodies on Wednesday had said that they would consider allowing passenger trains to run in the state if the Centre starts running the goods trains first. However, the Railways had refused, saying it would either operate both freight and passenger trains or none.

The suspension of goods trains has hit the supplies of fertilizers for the agriculture sector and coal for thermal power plants, besides adversely affecting the industry. Amarinder Singh had on Thursday said it was the joint responsibility of both, the state and the central governments, to provide a conducive environment for resolving the current crisis resulting from suspension of train services.

According to a government statement earlier, Amarinder Singh is also likely to soon hold meetings with Prime Minister Narendra Modi and Union home minister Amit Shah in Delhi. Earlier, the chief minister had said that he intended to hold discussions with the farmers' representatives, and also meet Modi and Shah on the issue, which was resulting in massive losses to the state exchequer every day, while causing irrevocable damage to industry and agriculture. He had said that he would urge both sides to take proactive steps to find an amicable solution to the problem.

Farmers, who are protesting against the three recently passed farm laws, have said that they will reach Delhi through five highways connecting the national capital on November 26 as part of their 'Delhi Chalo' march call. Farmers have expressed apprehension that the new laws would pave the way for the dismantling of the minimum support price system, leaving them at the "mercy" of big corporates. They have been demanding that the laws be repealed.