Home  »  Website  »  National  »  Explained: What Are Disinfection Tunnels And Are They Safe?

Various versions of these tunnels are springing up across the country without regulatory guidelines or clear benefits. 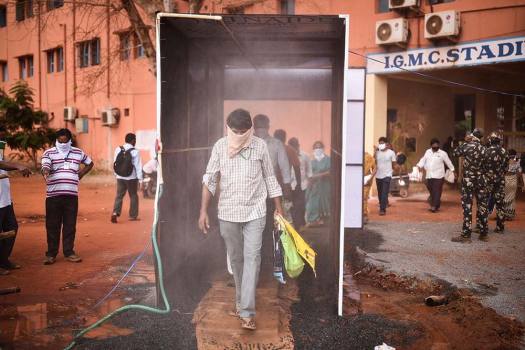 A man passes through a disinfection tunnel installed at Indira Gandhi Municipal Stadium, as a precautionary measure to prevent the spread of coronavirus
PTI Photo
Ramananda Sengupta 2020-04-09T09:41:54+05:30 Explained: What Are Disinfection Tunnels And Are They Safe?

Once this pandemic blows over, it’s a sight that might greet you when you return to work, or as you enter a mall, market, railway station, airport or any other place where a large number of people gather. They are called Disinfection Tunnels. As you pass through them, sometimes after washing your hands, nozzles spray a disinfectant mist on you which reportedly kills most germs and viruses, including, hopefully, the COVID-19.

Versions of these tunnels are already up and running at various places in the country, including several farmers’ markets, police stations and other public places in Tamil Nadu,  Karnataka, Telangana, Kashmir, West Bengal and Kerala,  Bihar, Uttar Pradesh, Delhi NCR and Punjab, and the list is rapidly growing.

Essentially these tunnels spray a mist of sodium hypochlorite solution, a chlorine compound often used as a disinfectant or a bleaching agent, as you pass through them. Sodium hypochlorite is a component of commercial bleaches and cleaning solutions and used as a disinfectant in drinking and waste water purification systems and swimming pools. In 0.5% w/v solution, it is called Dakin's solution and used as an antiseptic to clean infected topical wounds. The spray used by most Indian tunnels, like the one in a large market in Tamil Nadu’s Tiruppur district, is 1 per cent solution.

These tunnels come in various shapes, sizes and costs, and range from basic contraptions which cost less than 10,000 rupees to high-end steel and chrome tunnels with various sensors and conveyor belts and traffic lights which cost Rs 25 lakh.

For instance, the Indian Railways loco shed in Maharashtra's Bhusaval has developed a tunnel which costs just Rs 10,000. The tunnel has three nozzles that spray one part per million sodium hypochlorite solution for the three to five seconds that people take to pass through it. It has a tank capacity of 500 litres, which allows it to work non-stop for over 15 hours. But while Railway and other officials insist that the spray is relatively harmless for humans but enough to kill the COVID-19 virus, others are not so sure.

For one, even the World Health Organisation warns that these tunnels are meant to supplement, and not replace other measures like washing hands regularly, maintaining proper hygiene, wearing a mask, and maintaining social distancing.

More importantly, a slight variation in the concentration of sodium hypochlorite could lead to mild to extremely serious side-effects, ranging from skin and eye irritation to severe burns.

To avoid dangerous mishaps, It is important that the government quickly formulate and enforce guidelines for these tunnels.