Students say some of them may have to leave the course midway due to the 'unaffordable' fees which have increased by 70% in last six years.

More from Aritry Das
View All

Students of Indian Institute of Mass Communication in New Delhi have been protesting since Tuesday demanding to decrease the existing course fee, which they describe as "unaffordable".

The agitation follows the month-long protests in Jawaharlal Nehru University where students have been demanding the roll-back of the proposed hike in the hostel fee.

The students of IIMC, an autonomous journalism school under Information and Broadcast Ministry, said that the administration has not been listening to their demands to decrease the course fees and Rs 1,000 hike in monthly mess fees.

The fees for the current academic session saw an increase of around 20 per cent compared to 2018-19. It has increased by around 70 per cent since the 2014-15 period.

Students said the administration has been assuring them they will not increase the fee, "but it keeps increasing that every year". 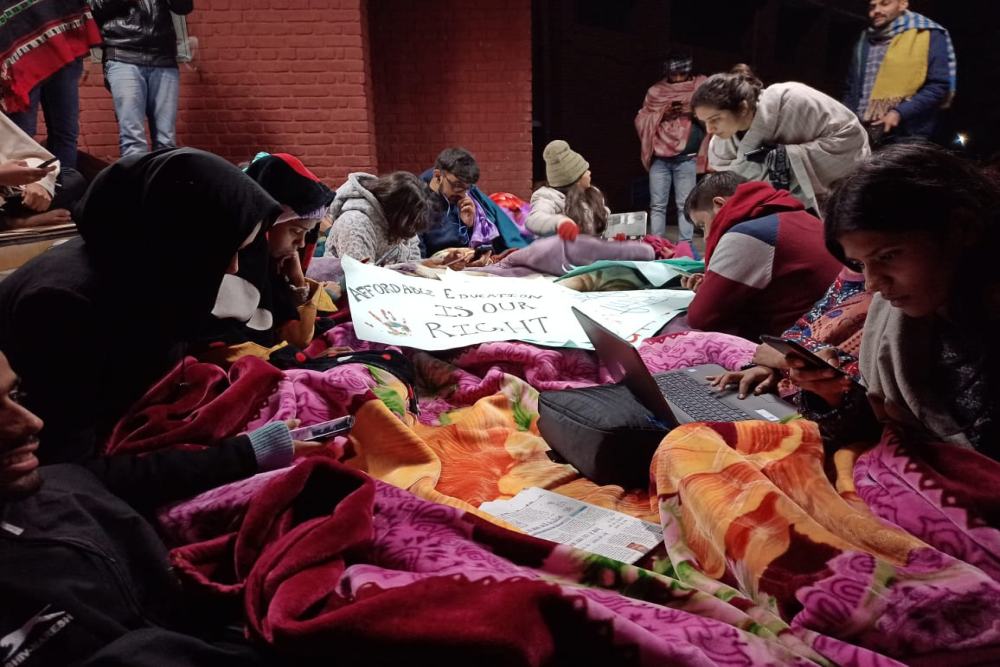 After a meeting on Wednesday with the administration, the students said they were told the hike in mess fee was a proposed tender and it had not been finalised.

"Despite holding several meetings in past few days, the administration did not inform us that the hike in fee was not finalised. Now that it is being reported in the media, they are saying it is yet to be finalised," said Hrishikesh Sharma, a student of Radio and TV Journalism at IIMC.

He added: "Even though we have not been assured that the mess fee hike will be rolled back, we still cannot afford the high course fees in addition to hostel charges."

Read Here: We Are Fighting To Save Last Bits Of JNU’s Essence: JNUSU President Aishe Ghosh

Since the Radio and TV Journalism is the costliest course in the institute, Hrishikesh said he works as a freelance reporter in order to make ends meet.

"My family income is Rs 70,000 per year. I have siblings whom my family has to provide for. Over and above the Rs 1,68,500, which is extremely high, I have to pay for hostel and mess fees. What do I even do? I have to work outside while missing classes in order to pay the fees. Many in the same situation do not even get the opportunity to work," Sharma said.

"I did not get a student loan under an available scheme of the Bihar government as IIMC does not appear in their list of approved institutes," Sharma said, adding that most students may struggle to pay the second-semester fees and some may even drop out.

The students are resolved to get the fee structure reviewed so that "the poorest of the poor" can also access the journalism school.

Sharma said the students will write to the I&B Ministry if the administration does not address their concerns.

The students said the hostel fees -- Rs 1750 per month for boys in three-bed rooms and Rs 3500 for girls in single-seater rooms -- and steep mess fees did not "equate" with IIMC being a public-funded institution.

They also complained that everyone does not get rooms in the hostel and many have to take up outside accommodation and pay a high amount of rent in the national capital.

Himanshu Pandey, a student of Hindi Journalism, said he enrolled in the course after paying Rs 95,500.  I thought it will cover all my expenses, he said.

"But then I did not get hostel allotment, like many others. I had to take up accommodation outside.  Besides, I have to pay for transport, canteen fees and other expenses. Everything together is now far beyond what I estimated. It is really difficult," he said.