Sonia Gandhi said the government has 'cruelly ignored' scores of migrant workers and the 13 crore families in the bottom half of the population as no financial relief has been provided to them. 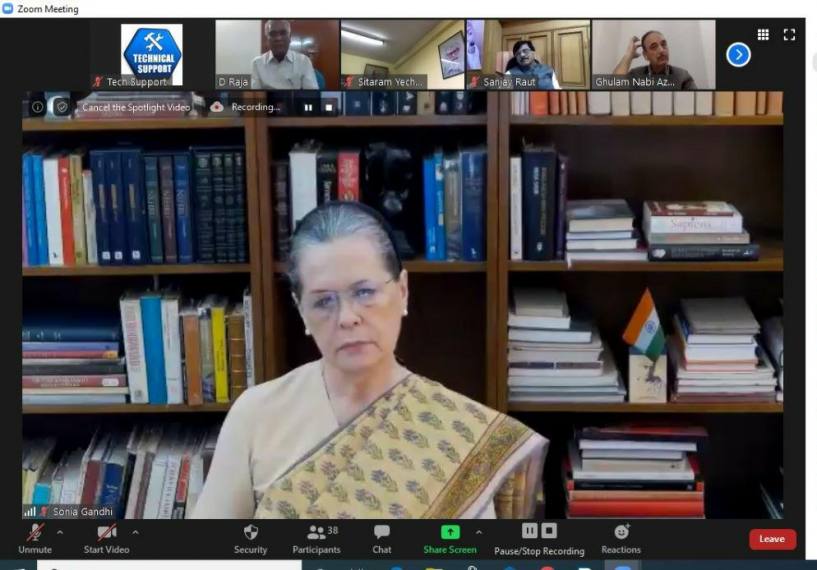 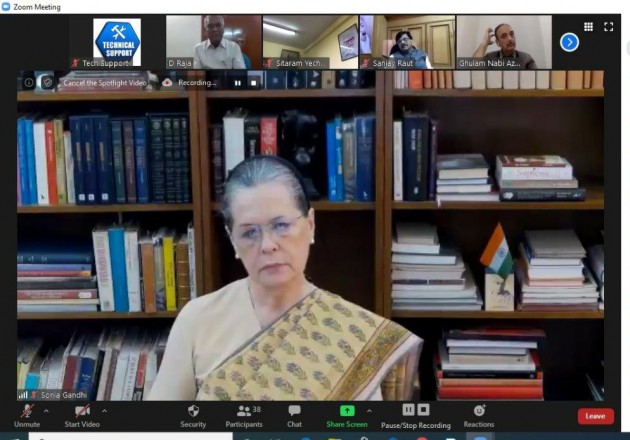 Congress president Sonia Gandhi came down heavily on the government over the COVID-19 situation in the country on Friday and alleged that it has abandoned any pretence of being democratic and forgotten the spirit of federalism.

Addressing a meeting of 22 opposition parties convened through video-conferencing to discuss the situation arising out of the coronavirus pandemic, she alleged that the government is uncertain about the criteria for enforcing lockdowns and has no exit strategy from it.

Gandhi said the government has "cruelly ignored" scores of migrant workers and the 13 crore families in the bottom half of the population as no financial relief has been provided to them.

"The prime minister's announcement of a grand Rs 20 lakh crore package on May 12 and the finance minister spelling out its details over the next five days have turned out to be a cruel joke on the country," she said.

The Congress chief said there is no indication either as regards whether Parliament or its standing committees will be summoned to meet to discuss the situation.

"The government has abandoned any pretence of being democratic and all power is now concentrated in only one office -- the PMO," she said.

Gandhi also accused the government of functioning unilaterally, saying there is no pretence of any consultation with the stakeholders or debate in Parliament.

Alleging that the government has embarked on a "wild adventure" of so-called reforms, including "a grand clearance sale of PSUs" and repeal of labour laws, she said, "We deplore these unilateral moves."

Gandhi pointed out that a number of renowned economists have predicted that 2020-21 will end with a negative growth of up to minus 5 per cent for the country and its "consequences will be catastrophic".

"That the present government has no solutions is worrying, but that it has no empathy or compassion for the poor and vulnerable is heartbreaking," she noted.

"The spirit of federalism, which is an integral part of our Constitution, is all but forgotten. There is no indication either if the two Houses of Parliament or the standing committees will be summoned to meet," she said.

The Congress chief said it is the duty of the opposition to offer constructive criticism and suggestions, and be the voice of the people.

"It is in that spirit that this meeting has been convened," she said, requesting the opposition leaders to come forth with their considered views.

Gandhi said many like-minded parties had demanded transfer of cash to the poor and free distribution of foodgrains to all, besides arranging buses and trains for migrant workers to go back to their homes. "But our pleas have fallen on deaf ears," she said.

Gandhi said the economic downturn began in 2017-18, when the seven quarters of declining GDP growth was unprecedented. Yet, the government carried on with its "misguided policies and incompetent governance", she rued.

The Congress chief said the initial optimism of the prime minister that the war against the coronavirus would conclude in 21 days has turned out to be misplaced and it seems that the virus is here to stay until a vaccine is found.

"I am also of the view that the government is uncertain about the criteria for lockdowns, nor does it have an exit strategy. The successive lockdowns have yielded diminishing returns. The government also stumbled badly on the testing strategy and import of test kits.

"Meanwhile, the pandemic continues to take its toll. The economy has been gravely crippled. Every economist of repute had pointed towards an immediate need for a massive fiscal stimulus," she said.

Gandhi also expressed grief at the enormous damage caused by Cyclone Amphan in Odisha and West Bengal, including the loss of 80 lives.

The Spirit Of Eid Lies In Simplicity And Empathy