Millions of migrant workers were stranded across the country without food, shelter and transportation after the nationwide lockdown was announced from March 25 at 4-hour notice to combat the spread of coronavirus. 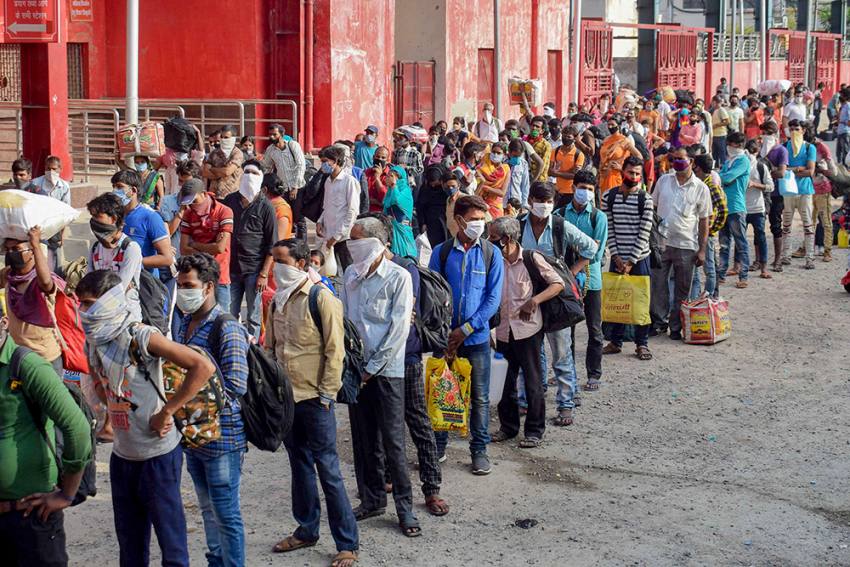 Migrants, who have arrived from Mumbai by a special train, wait to board buses to reach their native place, during ongoing COVID-19 lockdown, in Prayagraj.
PTI photo
Outlook Web Bureau May 28, 2020 00:00 IST Migrant Workers Won't Be Charged For Journeys Back Home: SC Tells Centre 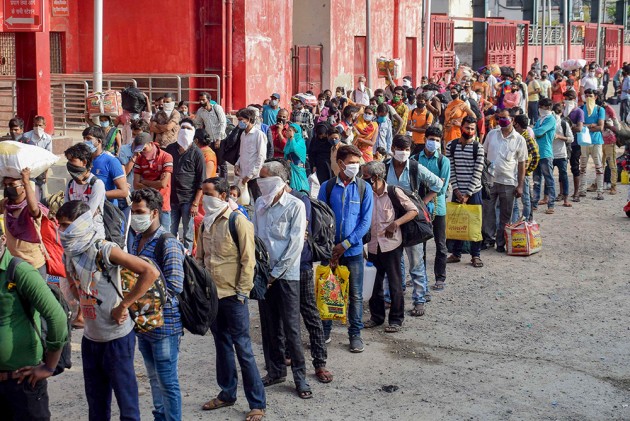 The Supreme Court on Thursday, in its interim order on the continuing migrant labourers' crisis which emanated from the nationwide lockdown, said the workers won't be charged for their journeys back home, adding the bus and train fares will be shared by the states.

A bench of Justices Ashok Bhushan, S K Kaul and M R Shah also said the stranded migrant labourers will be provided food by states and union territories till the time they board a train or a bus back home.

The top court has also directed the states and union territories to publicise the place and period for providing the food to migrant labourers. It added states will provide meals to the labourers at the station, and the railways will do the same during the journeys.

The apex court directed states oversee the registration of migrant workers and ensure that they are made to board the train or bus at the earliest.

It said that complete information in this regard should be publicised to all concerned.

The court observed that it is presently concerned with the miseries and difficulty faced by the migrants workers who are trying to get to their native places.

It said though there is no doubt that concerned state governments and UTs are taking steps, several lapses have been issued in the process of registration, transportation and providing food water to the migrants.

It said though there is no doubt that the concerned state governments and UTs are taking steps, several lapses have been noticed in the process of registration, transportation and providing food, water to the migrants.

The bench noted in its order that even after registration for travel, the migrants have to wait for a long time for their turns to come.

The bench noted submissions of Solicitor General Tushar Mehta, who said instructions have been given to state governments to facilitate a bus or vehicle if any migrant workers are seen walking on foot.

The bench further directed that migrant workers found walking on the roads should immediately be taken to shelters and provided food and other necessary facilities.

Earlier, the court asked Solictor General Tushar Mehta, representing the Centre, about the confusion over the payment of travel fare of stranded migrant workers and said that they should not made to pay for their journey back home.

“What is the normal time? If a migrant is identified, there must be some certainty that he will be shifted out within one week or ten days at most? What is that time? There had been instances where one state sends migrants but at the border another State says we are not accepting the migrants. We need a policy on this," the bench told Mehta.

Millions of migrant workers were stranded across the country without food, shelter and transportation after the nationwide lockdown was announced from March 25 at 4-hour notice to combat the spread of global pandemic, Coivd-19.

They then started walking hundreds of miles to reach their homes, leading to miserable plight.

On May 26, the top court had taken cognizance of the miseries of migrant workers and said there have been “inadequacies and certain lapses” by the Centre and the states, and asked them to provide transport, food and shelter immediately free of cost.