Delhi Police Books 480 People For Violating Night Curfew, Over 3,300 Fined For Not Wearing Mask In Noida 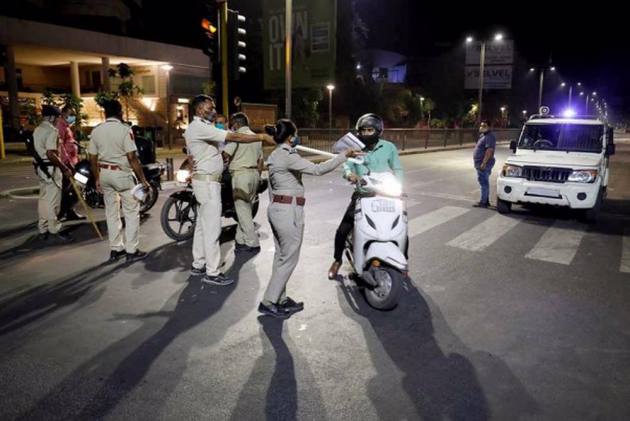 Delhi Police has booked 480 people for allegedly violating the night curfew imposed by the Delhi government due to the soaring Covid-19 cases.

According to data shared by the police, 489 cases for such violations were registered.

"A total of 843 people were booked under sections 65 (persons bound to comply with the reasonable directions of a police officer) of the Delhi Police Act and 107 (security for keeping the peace in other cases) and 151 (arrest to prevent the commission of cognizable offences) of the CrPC," Delhi Police Additional PRO Anil Mittal said.

The police also issued 731 'challans' to people for not wearing masks, he said.

On Wednesday, 220 cases were registered, while 534 people were booked under the Delhi Police Act and the Code of Criminal Procedure. The data showed a steep rise on Thursday.

The Delhi government announced a seven-hour night curfew on Tuesday. The decision was taken after the Delhi Disaster Management Authority (DDMA) reviewed the Covid-19 situation in the city.

The DDMA order for curfew from 10 pm to 5 am will be in force till April 30. However, it exempts people of certain professions from the curfew.

"The Delhi Police will strictly enforce it except for the exempted categories mentioned in the order. All concerned should strictly observe the restrictions as given in the DDMA order," Public Relations Officer of the force Chinmoy Biswal had said.

"Fresh movement passes will be issued on demand. Those requiring it and qualifying for it can also visit the Delhi Police website to apply for it. All field functionaries will be available in their jurisdictions to enforce the DDMA order and facilitate the exempted categories," he had added.

Meanwhile, over 3,300 people were fined on Thursday across Noida and Greater Noida for not wearing a mask in public spaces, the Gautam Buddh Nagar police said.

Challans were also issued to the owners of nearly 1,700 vehicles for flouting Covid-19 protocols and traffic rules, the police said, adding 27 vehicles were impounded in the action.

Amid a surge in cases of Covid-19, the district police alerted people through a public announcement system and patrolled crowded places to raise awareness about the situation, a police spokesperson said.

"As many as 3,364 people who were found without face masks in public places were issued challans and Rs 3.36 lakh collected from them in fines," the spokesperson said.

"Action was taken under Section 188 (disobeying government order) against 70 people and FIRs were lodged in 30 such cases," the official added.

Challans were issued against the owners of 1,685 vehicles and Rs 1.99 lakh collected from them in fines while 27 vehicles impounded, the police said.

Besides checking for face masks, vehicles were checked for traffic rules like usual, the police added.