Three fresh casualties were reported from Bihar's Darbhanga district, where the total number of fatalities caused by floods has now reached seven. 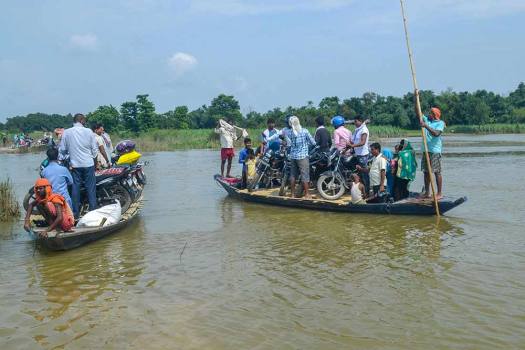 The flood situation in Bihar worsened on Wednesday with the death toll rising to 11 and nearly 40 lakh people being affected by the deluge, the state disaster management department said.

According to the department's bulletin, three fresh casualties were reported from Darbhanga district, where the total number of fatalities caused by floods has now reached seven.

The remaining four deaths have been reported from West Champaran.

The state government charged Nepal with "non-cooperation" in carrying out flood protection work, but claimed that the needful was being done by the water resources department.

Water Resources Department Minister Sanjay Kumar Jha tweeted, "Undertaking flood protection work this year was a major challenge because of COVID-19 and non-cooperation from Nepal. Still, we have managed to complete the work at several places."

The minister, a close aide of Chief Minister Nitish Kumar, also shared video footage of the work on maintenance of embankments being carried out by the department's personnel at the Nepal border.

The neighbouring country has recently sought to stymie, on a number of occasions, repair and maintenance of barrages and embankments by officials of Bihar, which requires access to the other side of the border.

The number of people affected by the floods, caused by heavy rainfalls in catchment areas along the Indo-Nepal border, has now reached 38,47,531, a jump of nearly a million since the previous day.

Residents of nearly a thousand villages across 12 affected districts have been hit by the deluge.

Heavy rainfalls also lashed most parts of the state, triggering fears of worsening of the situation.

According to the Indian Meteorological Department, the state received an average total rainfall of 22 mm, which was 89 per cent in excess of normal.

Heaviest downpours were witnessed in flood-hit districts like East Champaran, Muzaffarpur and Sitamarhi where the volume of rainfall was stated to be more than 300 per cent above normal.

Relief and rescue efforts, meanwhile, were in full swing with teams of the NDRF and the SDRF, equipped with 1,500 boats, being pressed into service.

Assistance is also being provided by IAF helicopters for air-dropping of relief material.

Vijay Sinha, commandant of the 9th battalion of the National Disaster Response Force (NDRF), said, "Our 22 teams have rescued more than 7,700 people and hundreds of cattle. Rescue operations are being conducted amid strict adherence to norms in place for the prevention of spread of COVID-19."

He also said in addition to routine operations, NDRF personnel were also offering their services for bringing life back to normalcy. In Darbhanga's Bahadurpur block, NDRF men were engaged in helping restoration of power supply.

In Saran, they resuscitated a 10-year-old boy, saved from drowning by local villagers.

The disaster management department put the total number of people evacuated from marooned localities at 3.09 lakh. Out of them, more than 25,000 people were taking shelter at 19 relief camps.

Besides, 989 community kitchen were catering to 5.71 lakh people.