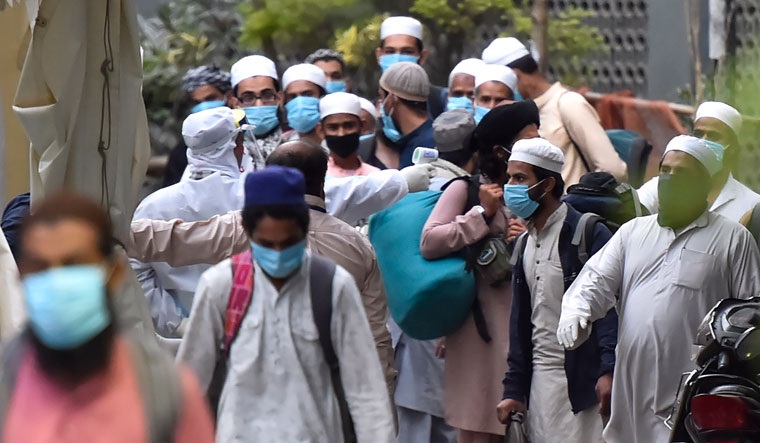 Thirteen Tablighi Jamaat members, including two Sri Lankan nationals, were arrested here for allegedly staying in a mosque in violation of the coronavirus lockdown orders, police said on
Wednesday.

While the two Sri Lankan nationals have been sent to jail, the other 11 Jamaat members were released on bail, they said.

The Sir Lanka embassy in Delhi has been informed about the arrest of its two citizens, they added.

"The 13 were booked under IPC sections 188 (disobedience to order duly promulgated by public servant) and 269 (negligent act likely to spread infection of disease dangerous to life)," police said.

The Sri Lankan nationals were also booked under sections 14 and 14c of the Foreigners Act for violating the visa regulations by indulging in religious activities, they added.

As per the guidelines issued by the Centre, religious places and places of worship will remain shut during the lockdown imposed to curb the spread of coronavirus.

The district authorities have launched a drive to trace all members of the Tablighi Jamaat who have been in "hiding" since the lockdown was imposed on March 25.

At least 9,000 people participated in the congregation, after which many of the attendees travelled to various parts of the country.

District Magistrate Chandra Bhushan had issued an appeal that "it was in public interest that such persons are immediately traced".

During the past two days, 72 such individuals, who belonged to different districts of the state, were identified, police said.

The district authorities with the help of some local Muslim leaders, including former legislator from Aligarh Haji Zameer Ullah, made the arrangements for sending these persons to their native places after completing medical formalities.

Zameer Ullah, in a statement, urged the UP chief minister to take necessary steps for the early release of the two Sri Lankan nationals on humanitarian grounds since they were the victims of the circumstances and also in view of the holy month of Ramzan.