The CWC has decided to have consultations with leaders from across the country and the party's top decision-making body then was divided into five groups for different regions – North, Northeast, West, East, and South. 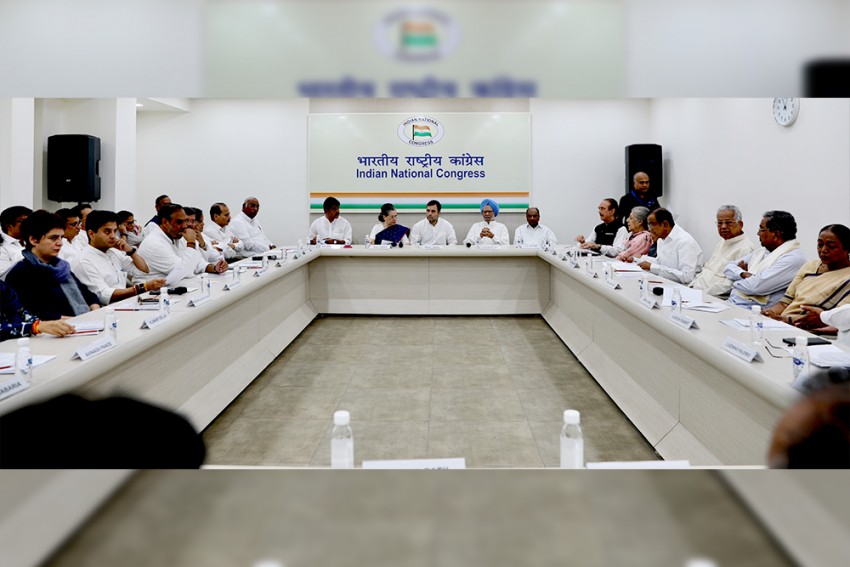 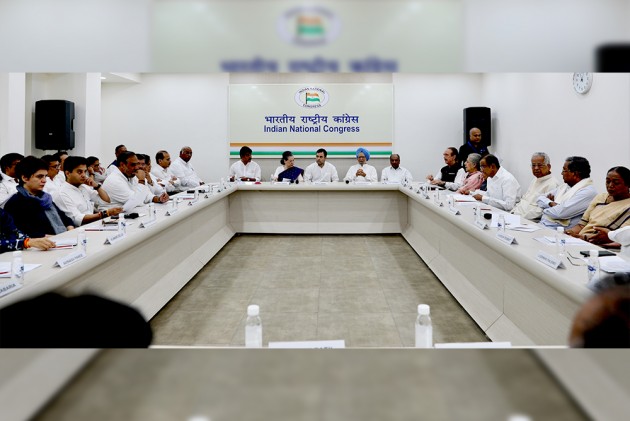 The consensus continued to evade the choice of Rahul Gandhi's successor as Congress president, on Saturday, with a section of party veterans in the CWC seen as the "old guard", beginning to veer towards having a "younger and dynamic" leader in the top position, senior party sources have told Outlook.

Besides Mukul Wasnik, the four-time former MP from Maharashtra, names of Jyotiraditya Scindia and Sachin Pilot are back in the reckoning, sources said. A senior party leader told Outlook that the support for Wasnik, seen as the frontrunner for the post till Saturday morning when the CWC first met for discussions, had begun to wane with the strongest opposition to his candidature coming from his party colleagues from the Maharashtra unit.

There also seems to be a view that the Congress must not choose a chief from any of the poll-bound states, making it difficult for Haryana's Dalit leader Kumari Selja to make the cut at the moment.

However, the grand old party is unlikely to announce the name of the party chief today, sources told Outlook, adding the announcement may come in another day or two. Earlier on Saturday, it was speculated that the next Congress president may be named by 9 pm tonight after the five regional groups complete their discussions and present the names before the CWC. However, the lack of consensus seems to have prolonged the process and therefore the announcement, for now.

In case the five regional groups, which are part of the discussion on the future party chief, fail to reach common ground, the names of the shortlisted probables will once again reach Rahul Gandhi and Sonia Gandhi.

In such a scenario, sources said Rahul's will is likely to prevail, adding the Gandhi scion and his sister Priyanka Gandhi Vadra are out of the fray. Sources added that Rahul's decision to throw open the consultation to include PCC presidents and CLP leaders was aimed at breaking the stranglehold of the old guard in the decision-making process.

"A majority of the PCC presidents and CLP leaders have been appointed by Rahul while the CWC has a larger share of veterans who don't necessarily support Rahul's ideas on the organisation revamp. As such, including the state leaders in the process was Rahul's way of ensuring that there is a greater chance of a younger name being thrown up," a CWC member told Outlook.

Earlier, UPA chairperson Sonia Gandhi and Rahul Gandhi recused themselves from the deliberations, saying they cannot be part of the consultation since they had been Congress presidents in the past and would not like the opinion of the party leaders to be influenced in any manner.

The CWC decided to have consultations with leaders from across the country and it was divided into five groups for different regions -- northeast, east, north, west and south.

The five groups were formed to hold wider consultations with party leaders from across the country that included state unit chiefs, parliamentarian and Congress Legislative Party leaders.

Congress chief spokesperson Randeep Surjewala said several leaders who could not make it to New Delhi have been consulted over the phone. The five groups will place their final report before the CWC at 8 pm.

The CWC is yet to accept Rahul Gandhi's resignation and began its meeting by urging him to continue as party chief in the wake of the BJP's "onslaught on democracy and dissent," Surjewala said.

It, however, proceeded with the deliberations on the party's next chief after Rahul Gandhi made it clear that he will not take back his resignation.

Party sources said most leaders rooted for Rahul Gandhi to continue or Priyanka Gandhi to be made Congress president, signalling a deep divide in the party over who could lead it in these "trying times".

Narayansamy told reporters, "I told them that Rahul Gandhi should continue as AICC president. They asked me for an alternative, but I said there is none. We have to persuade him to withdraw his resignation because he is the only leader who can carry the party forward and strengthen it."

Rahul Gandhi has already said the next party chief should be a non-Gandhi, making the task of Congress leaders difficult. He said that he will spend the next two days in his constituency Wayanad in flood-hit Kerala.

The delay in selecting the new party chief, sources say, is rooted in the fact that there is lack of consensus on the name of a non-Gandhi president.

"We cannot be part of this process of selecting the new party chief," Sonia Gandhi said as she along with Rahul Gandhi recused themselves from the consultation process.

Clarity on the issue is expected by tonight, with Surjewala saying, "There is a sense that this impasse should end as soon as possible, which is why the CWC will meet again at 8 pm to take a call."

He said Rahul Gandhi, while refusing to continue as party chief, asked the CWC for broad-based consultation process and for engaging state chiefs, CLP leaders, MPs, and AICC secretaries.

"The CWC will meet at 8 pm and decide on the new party chief," Surjewala said.

"Both Rahul Gandhi and Sonia Gandhi felt that if a democratic process is to be obtained, then they have to recuse themselves. Sonia Gandhi said her presence is not required so that the process remains transparent and uninfluenced. That's why they recused themselves," he said.

Several partymen have expressed their opinion in public, that the delay in selecting the new Congress chief is harming the party.

As the Congress began the process of finding Rahul Gandhi's successor, senior party leader Shashi Tharoor said on Saturday the new chief should be a person who can energise the party's organisation and inspire the voters, asserting that the Congress cannot afford "business as usual".

"For those following the #CWC meet to decide on a new @INCIndia President: My position remains what I first articulated more than a month ago: CWC should choose an Interim President asap (as soon as possible), then resign & announce open elections for both President & CWC," the Thiruvananthapuram MP tweeted.

The party has also been grappling with a series of desertions by leaders in Karnataka and Maharashtra, the latest being that by ex-Congress Rajya Sabha chief whip Bhubaneswar Kalita and MP Sanjay Singh.

With upcoming elections in Maharashtra, Jharkhand and Haryana, the party is hoping to resolve the leadership issue quickly and move forward.