The complainant describes TV commercial as 'shocking, disgusting and repulsive', alleging that it creates 'a very wrong impression' about working women 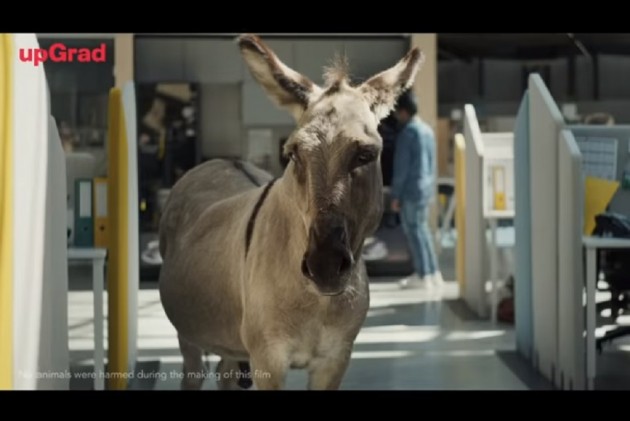 A latest TV commercial of the upGrad featuring a donkey has run into trouble with an eminent lawyer and activist Mrinalini Padhi filing a complaint against it with the Advertisement Standard Council of India (ASCI), describing the online education company's ad as “blatantly sexist, misogynist and objectionable under any acceptable parameter.”

Padhi, a former member of the Odisha State Consumer Disputes Redressal Commission, has also served a legal notice to the upGrad’s Co-founder and Executive Chairman Ronnie Screwvala, urging him to withdraw the TV commercial “immediately”.

“Failing which appropriate legal civil and criminal action would be initiated,” she has warned.

Confirming that she has filed a complaint against the upGrad’s advertisement with the ASCI and also served a legal notice to the company’s Co-founder and Executive Chairman, Padhi said the company’s TV commercial is "indecent and demeaning" as it portrays working women in “an extremely bad light.”

Established in 2015, upGrad is an online higher education platform providing industry -relevant programmes designed and delivered in collaboration with
"world-class faculty" and industry.

Efforts to take response of the online education company on the issue went in vein. A PR agency, which handles media for the upGrad, did not provide any response from the company despite repeated requests since August 25.

“The advertisement depicts a woman, who is licking an ass, in a suggestive manner in order to rise in her career. Whereas, a man is shown as someone who doesn’t lick the ass and progresses in career because he undertook a course offered by the upGrad,” Padhi told Outlook.

She described the TV commercial as “shocking, disgusting and repulsive”, alleging that it creates “a very wrong impression” about working women.

“The expression of the girl, the way she drops the paper before licking the ass and her expression thereafter shows her willingness to the overtures of the boss which would have normally been condemned as sexual harassment in workplaces, which has been so elaborately dealt with by the Supreme Court,” she added.

Padhi contented that the upGrad’s advertisement, being telecast on all major TV channels, is also “inappropriate” for the children to watch.