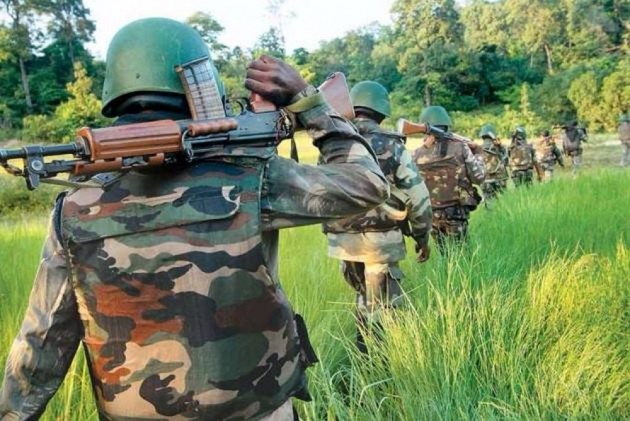 In a major success, police forces gunned down at least 10 Naxals following a furious gun battle in a dense forested patch of Maoist-hit Bijapur district, Director General of Police DM Awasthi informed in Raipur on Thursday.

“We have recovered bodies of 10 uniform Naxals from the spot along with 12 firearms,” the DGP said while addressing a press conference held at old police headquarters.

While terming the operation as outcome of 'impeccable intelligence' he informed that the operation was carried out by a team of Special Task Force (STF) and District Reserve Group (DRG) personnel deep in Abujhmad region.

“We had received intelligence input about presence of Maad DVC (Divisional Committee Member) Rajman Mandavi and Sukhlal along with 40 to 50 armed Naxals who were conducting a training camp for Naxal-militia members. Accordingly police team was sent to the spot,” the DGP said.

Police forces confronted Naxal in forest of Borga near Talibod village under Bhairamgarh police station limits. The exchange of fire between lasted for about two-and-half hours. Later on, while searching the area bodies of 10 uniform Naxals along with 11 muzzle loading gun and one 315 bore revolver were recovered, he said.

He further informed that reinforcements have been sent since the region is heavily forested and police forces will have to cross the Indravati River before reaching back to base.

While terming the encounter a successful start of 2019 he also congratulated SP Bijapur and IG Bastar and pointed the operation as a major success for intelligence wing of state police.