Pilot is unlikely to get any role in Rajasthan Congress or Gehlot government for now but he might be roped in for key responsibilities in the All India Congress Committee (AICC). 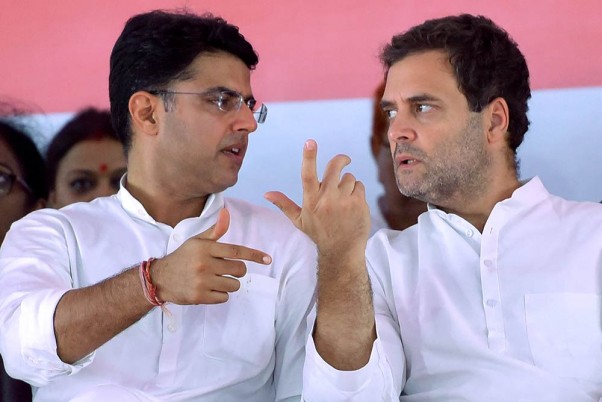 According to sources, Pilot has assured Congress high command that he will end his rebellion and there will likely be no action against rebel Pilot loyalists.

Following this meeting, Congress President Sonia Gandhi has decided that the AICC will constitute a three-member committee to address the issues raised by the Pilot camp, the statement said.

Pilot is unlikely to get any role in Rajasthan Congress or Gehlot government for now, but he might be roped in for key responsibilities in All India Congress Committee (AICC).

Disciplinary action initiated against Pilot loyalists Vishvendra Singh, Ramesh Meena and Bhanwarlal Sharma may be suspended for now. However, it is unlikely that Singh and Meena, who were dropped from the Gehlot cabinet along with Pilot last month, will be reinstated immediately in their ministerial roles.

Gehlot is also meeting Rajasthan Pradesh Congress Committe (RPCC) President Govind Dotasra in Jaipur to discuss handling of the situation within his camp of loyalists.

Finer details of how to handle the impact of party's decision among Gehlot loyalists and accomodate Pilot's rebels is being worked out.

Although there is no confirmation regarding what was discussed in the meeting between Pilot, Rahul and Priyanka, the two Gandhis also met Sonia to discuss the latest developments.

Gehlot has assured Sonia Gandhi that he will not defy the party irrespective of whatever decision it takes on Pilot. He left the matter to Sonia and Rahul to resolve. Sonia is likely to speak to Rahul, Priyanka and Pilot later this evening or may ask Rahul and Priyanka to speak to Pilot and then discuss the outcome with her.

Party wants to close the matter today so that the rebels can return to Jaipur tomorrow and the party has 2-3 days to discuss strategy for Assembly session beginning August 14.

Sources told Outlook that Congress had resumed back channel talks with Pilot last week. Congress organization general secretary and Rajya Sabha MP KC Venugopal had visited Gehlot and his MLAs in Jaisalmer on Saturday and informed them about a possible end to the month-long stalemate. Venugopal urged the CM to not give any fresh statement against Pilot.

Gehlot had then met the party's MLAs on Sunday and informed them that he needs to reach Jaipur on Monday. Gehlot told the MLAs that they should accept whatever decision the high command takes vis-a-vis Pilot.

Exact reasons for Pilot's indecision on whether or not to see his rebellion through are not yet known. Speculation is rife that the BJP grew wary of plans to destabilize the Gehlot govt with Pilot's help after former CM Vasundhara Raje's discussions with JP Nadda and Rajnath Singh. Raje, sources say, was unyielding in her opposition to a truck with Pilot. There have also been rumours that since over 40 of BJP's 72 MLAs in Rajasthan are Vasundhara loyalists, the party couldn't afford to sideline the former CM and rely on the likes of Gulab Chand Kataria, Satish Poonia or Gajendra Singh Shekhawat.

There is no clarity yet on whether Pilot has been offered some face saving deal by the Congress high command or not. Congress sources say Pilot has demanded certain assurances but the the manner of his rebellion and the tough stand taken by Gehlot against his axed deputy has made it difficult for the Congress to promise any kind of immediate reinstatement to the rebel.

Gehlot and his supporters want Pilot to publicly apologise to the CM for his behaviour but the rebel leader has refused to do so. Congress has also made it clear to Pilot that it will under no circumstances replace Ashok Gehlot as CM.

At least one more round of talks between Rahul, Priyanka and Pilot are likely. However, no time has been given yet on when this meeting will take place.

Sources told Outlook that Gehlot loyalists have told party observers that stern action needs to be taken against rebel MLAs. If no action is taken against Pilot and his loyalists, the Gehlot camp MLAs fear, Congress risks sending a message of being easily arm-twisted and tolerating indiscipline.

Congress MLAs are currently holed up in a Jaisalmer hotel as the party has accused the BJP of horse-trading following the revolt by Pilot and 18 MLAs loyal to him.

Sources also said that Gehlot told his MLAs before leaving for Jaipur that he will abide by whatever decision the high command takes and that sometimes “difficult decisions have to be accepted in the interest of the party.”

Rajasthan Assembly will convene on August 14. Chief Minister Gehlot is likely to go for a floor test irrespective of outcome of probable meeting between Rahul and Pilot.

The Congress had sacked Pilot as Deputy Chief Minister and the Rajasthan Congress President.

15% Students Enrolled In Delhi Govt Schools Not Traceable Since Lockdown