In an interview with Outlook, Sonam Wangchuk says that burning Chinese goods is not a smart response to the military aggression at the border. 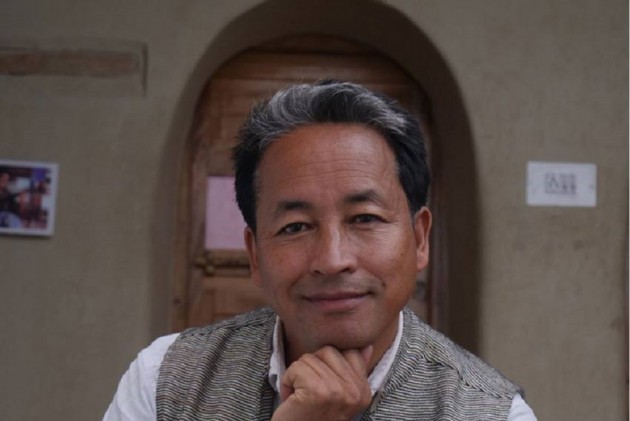 Ladakh-based innovator and educationist, Sonam Wangchuk, started a movement to boycott Chinese products in India. Wangchuk has earned accolades in India and elsewhere for various innovations in Ladakh such as ‘Ice Stupa’—which helped to overcome water crisis in hilly areas—and the Students’ Educational and Cultural Movement of Ladakh (SECMOL), which runs a solar-powered campus and works for revolutionary reforms in the education system. Locals relate Wangchuk’s life journey to Aamir Khan’s character of Phunsukh Wangdu in the Bollywood blockbuster 3 Idiots.

In an interview with Outlook’s Jeevan Prakash Sharma, Wangchuk says that burning Chinese goods is not a smart response to the military aggression at the border. Edited excerpts:

Q: Why did you start a movement to boycott Chinese products?

China’s aggression towards India has been going on for many decades and there was very little that we, people of Ladakh, could do about it. But this time it was different. I could see that it was motivated not so much by military aggression, but by an internal political problem within China. The Chinese regime handled Covid-19 badly, which resulted in a disaster for their economy. Business and factories were shut, and unemployment was high. There were discontent and frustration and an atmosphere of revolt within China. So, to divert people’s attention, they started showing military aggression and picking fights not only against India, but other countries as well. It is not a mere coincidence that in April and May they had problems with Vietnam, Taiwan, US Navy and so on. If this is the case, then the economic response against them will have a bigger impact than a military response.

In short, the aim is to hit china where it hurts— political instability due to the economy. If we boycott Chinese products, their economy will further flounder, which will aggravate the worsening political situation. And to avoid that, they would be more responsive and ready for a dialogue.

Q: Do you mean that goods which have already been imported to India should also be boycotted?

No. I said boycott software within a week and hardware in a year. This is because goods which have already been imported will not last longer than a year.

Q: How do you respond to people and organisations burning Chinese products on streets?

It saddens me. I can understand their emotions, but I am disappointed that they are not smart in their response. Damaging products is not good because they are a resource of nature. These people don’t seem to understand that we have nothing against goods, things, and the people of China. We have nothing against the civilisation of China. We have everything against a regime that uses people and goods to control the world. We should not burn Chinese goods. We should not have an emotional outburst for a few hours. Instead, we should have a sustained campaign for a few years.

Q: Don’t you think it would be more effective if the government stops import of Chinese products?

In my understanding, it should be people rather than the government. Governments are bound by protocols like WTO, so it will invite retaliatory action which may harm both sides. But if people stop buying Chinese products, the government cannot do anything. If the government stops imports, China will threaten us, and take countermeasures. I don’t want that. The only way is that they should behave and win our hearts, only then will we buy their products. Chinese regime should realise that customer is the king.

Also Read | ‘Software In A Week, Hardware In A Year’: Sonam Wangchuk Calls For 'Boycott Made In China'

Q: Do you agree that boycotting Chinese products is not the solution until there is a simultaneous effort to develop our own industries and compete with their manufacturing capabilities?

Boycotting Chinese products is less than half the challenge. The major challenge is getting our own act together. Also, I give an ethical angle to boycotting. We should not boycott just because we hate China. We have a problem with the current regime which is exploiting its own people. It is the regime which is making cheap goods to plug the world and kill every industry by violating labour rights, human rights, environmental rights at home. They subsidise artificially and manipulate currencies. These are the reasons why Chinese goods are cheap. We should boycott Chinese products for ethical reasons, just like we boycott products to oppose child labour or products which involve cruelty to animals. Same ethics apply here too.

That’s one part of my movement. The second part is to make yourself more competent. Why should we be such a disorganised disaster? Our government should young entrepreneurssupport them like the Chinese government supports its entrepreneurs. This is a golden opportunity for India to emerge as a global power. The whole world is looking for alternatives to Chinese goods. If we cannot rise to this occasion, then we may never get such an opportunity again.

Q: There are delays in getting approvals for setting up businesses in India. How will we then compete with China?

The process is cumbersome when there is a deficit of trust. The biggest malady India suffers from is a trust deficit. The government doesn’t trust entrepreneurs, citizens don’t trust the government. We really need to become more trustworthy at all levels. All religions, be it Hinduism, Buddhism or Islam, teach trust and we are perhaps one of the least trustworthy people. I think there is a need to bring a trust revolution in India. Like we have Abhiyans (movements) on Swachch Bharat, we should have an Abhiyan on Vishwas (trust). A lot of things should be left to trust and then those who violate it should be subjected to very serious action.

Q: Do you think India should also take military action against China for killing its 20 soldiers?

I would leave it to the military system to assess the pros and cons of taking action. I cannot comment on that, but I am much more concerned about other actions against China. I think citizen’s reaction is much more effective at this point, particularly if we don’t just limit it to ourselves. We should ally with other countries which have similar issues with China.