Yeddyurappa for the last couple of days had been waiting for "instructions" from the party high command to stake claim to form the government after the Congress-JDS coalition government had collapsed after the floor test on Tuesday. 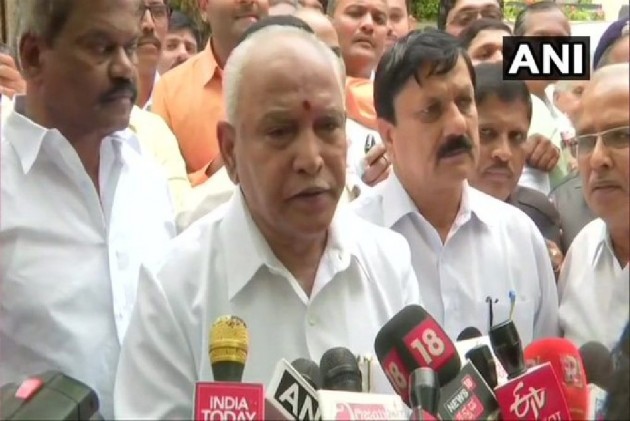 Karnataka BJP president B S Yeddyurappa on Friday said he will take oath as the Chief Minister of the state at 6pm after Governor Vajubhai Vala agreed to his request to stake claim.

"I have requested Governor to administer me oath between 6-6.15 pm as the Chief Minister, the Governor has agreed and given me a letter," Yeddyurappa told reporters after meeting the Governor at Raj Bhavan in Bengaluru.

Stating that he will take an oath by that time, he said, "who all are to be inducted (in the ministry), I will discuss with our national president and inform."

Yeddyurappa met Governor Vala to stake claim to form the government and requested him to administer oath of office and secrecy on the same day.

He said, as he is already the Leader of the Opposition, there is need to call Legislature party meeting, to elect the leader.

Yeddyurappa said he will also be sending a letter of invitation to outgoing Chief Minister H D Kumaraswamy and Congress Legislature Party leader Siddaramaiah for the swearing-in ceremony.

"I will also try to contact Kumaraswamy and Siddaramaiah over the phone, to invite them personally," he added.

Yeddyurappa for the last couple of days had been waiting for "instructions" from the party high command to stake claim to form the government after the Congress-JDS coalition government had collapsed after the floor test on Tuesday.

The 14-month-old Congress-JDS coalition government headed by H D Kumaraswamy collapsed on Tuesday after losing the vote of confidence in the Assembly in a climax to the three-week-long intense power struggle.