While BJP dubbed Congress as 'owner' of the 'Tukde Tukde Gang', leader of Opposition in Karnataka assembly Siddaramaiah said 'Bharat Mata is not the property of BJP' 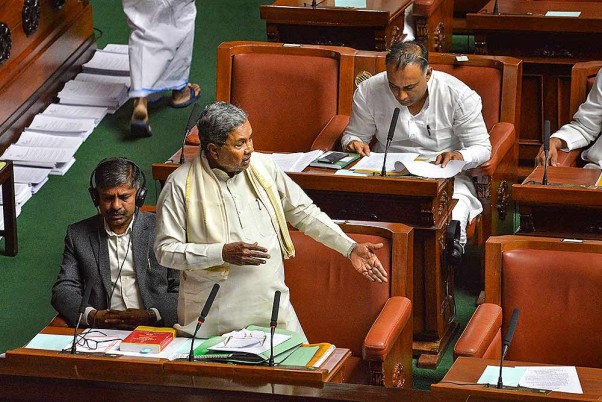 The Karnataka assembly proceedings on Tuesday saw the ruling BJP and the opposition Congress sparring over 'Tukde Tukde Gang' and 'Bharat Mata'.

While hitting out at ruling party legislators, Leader of the Opposition in the assembly Siddaramaiah said that "Bharat Mata is not the property of BJP".

Home Minister Basavaraj Bommai, slamming the Congress, called them the "owners" of the 'Tukde Tukde Gang'.

Siddaramaiah, while making a preliminary submission seeking to move an adjournment motion on the law and order situation in the state, attacked ruling BJP both in the state and Centre for an "undeclared emergency" in the country.

He also accused the BJP of undermining the Constitution and democracy, to which Minister K S Eshwarappa referred to the Emergency declared by the then Prime Minister Indira Gandhi and reminded the former Chief Minister that he had opposed it while in the Janata Dal.

"We (BJP/RSS workers then) were put behind bars for hailing Bharat Mata and calling ourselves as her sons", Eshwarappa said.

Reacting to this Siddaramaiah said, "Bharat Mata is not your property. You have not taken on lease. All 135 crore Indians are her children."

Intervening, Minister C T Ravi hit out at Congress for supporting the 'Tukde Tukde Gang', resulting in heated arguments between the treasury and opposition benches.

Taking strong exception to the remark, Congress MLA Priyank Kharge questioned who were the 'Tukde Tukde Gang' and why the BJP governments, both at the Centre and state, were not arresting them.

Referring to the Home Ministry's written reply in the Lok Sabha recently that it had no information on any group called the 'Tukde Tukde Gang', Kharge asked BJP to question Union Home Minister Amit Shah about them. "...who and where are they? Ask Shah."

Retorting to it, Bommai said: "you people- Congress are owners of 'Tukde Tukde Gang'. To which Kharge said, "Arrest us then, slap sedition charges against us. I challenge you."

A war of words broke out between the two sides, and Speaker Vishweshwar Hegde Kageri intervened to carry forward the proceedings.