Defence Minister Rajnath Singh's comments came after Congress and other opposition members raked up remarks made by BJP MP Pragya Thakur in the House on Wednesday on Godse. 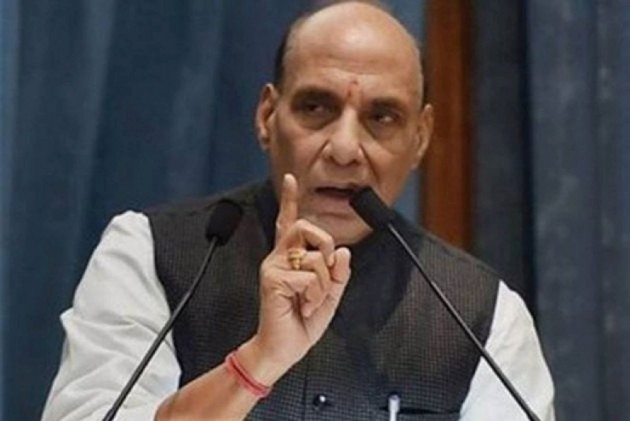 Amid opposition protests over BJP MP Pragya Thakur's comments on Nathuram Godse, Defence Minister Rajnath Singh on Thursday said in Lok Sabha that his party condemns any philosophy which describes Mahatma Gandhi's killer as a patriot.

Singh also said that Gandhi's philosophy was, is and will remain relevant and described him as a guide (margdarshak) for the nation.

Not satisfied with his response, the opposition led by the Congress staged a walkout.

As soon as the House met to take up the day's business, opposition members stood up and strongly protested the remarks made by Thakur on Wednesday on Godse during the debate on the Special Protection Group (Amendment Bill).

Congress leader in the House Adhir Ranjan Chowdhury said Thakur has called Godse a patriot and the Congress a terrorist party.

"Thousands of members of the Congress have laid down their lives while serving the nation. How can she dare to say such things that too inside the House. We demand action," he said.

The Congress leader accused the BJP of doing politics in the name of Gandhi and appropriating his and Nehru's legacy.

Chowdhury said it was because of the BJP's ideology that Thakur could make such comments.

The Congress leader was supported by members belonging to the Trinamool Congress, DMK, Left parties, NCP and AIMIM.

Speaker Om Birla tried to pacify the agitating opposition members, saying he would give his ruling and asked them to take their seats.

TMC leader Saugata Roy and AIMIM leader Asaduddin Owaisi told the Speaker that they should also be given an opportunity to speak.

Birla, however, said the remarks of Thakur were already expunged from the records and there was no scope for any debate.

At this, the Defence Minister stood up and urged the Speaker to allow him to speak.

Singh said the BJP condemns any philosophy which describes Godse as a patriot.

"Far from talking about Nathuram Godse being called a patriot, we condemn the idea of treating him as a patriot. His philosophy was, is and will remain relevant and he is as a guide (margdarshak) for the nation," he said.

Not satisfied with the response, the MPs belonging to the Congress, Trinamool Congress, DMK, Left parties, NCP and AIMIM staged a walk out.

However, the BSP, BJD, TDP and TRS members remained seated in the House.

Unlike on other issues, when they are often seen engaged in a verbal duel with the opposition, BJP members remained quiet during the opposition protests today.