Amit Shah made the announcement in the presence of JD (U) president and Bihar Chief Minister Nitish Kumar and Lok Janshakti Party chief and Union minister Ram Vilas Paswan. 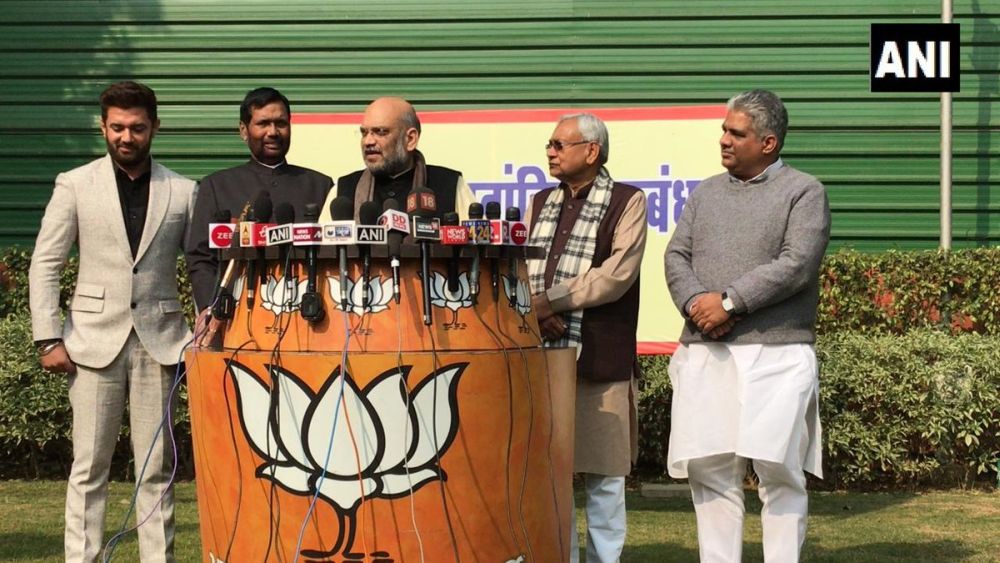 The Lok Janshakti Party (LJP) will contest six seats while the BJP and the Janata Dal-United (JD-U) will contest 17 seats each, in the 2019 Lok Sabha elections in Bihar under a seat-sharing formula, BJP President Amit Shah announced on Sunday.

The Bharatiya Janata Party (BJP) and the JD-U also agreed to give a Rajya Sabha seat to LJP chief Ram Vilas Paswan.

"The BJP and the JD-U will contest 17 seats each, while the LJP will contest six seats in Bihar in the 2019 Lok Sabha elections," Shah said after an hour-long meeting with Bihar Chief Minister Nitish Kumar and Paswan.

Shah said they have agreed to contest under the leadership of Prime Minister Narendra Modi and expressed confidence that the National Democratic Alliance would win more seats in Bihar in 2019 than it did in 2014.

He said a joint election campaign would be organised and a final draft to would be prepared by the state leaders of the NDA.

On the occasion Nitish Kumar said that the NDA would contest the elections strongly and would repeat the results of 2009 when the BJP and the JD-U contested together and won 32 out of 40 seats.

"We will jointly campaign and form the government at the Centre," Kumar said.

Bihar Chief Minister Nitish Kumar after announcing seat sharing for 2019 general elections: We are committed to development in Bihar. We are of the opinion that the Ram Mandir matter should be solved through a court decision. pic.twitter.com/bOvRDLhz1z

Paswan thanked the BJP leadership for a respectful agreement on the seat sharing and vowed to form the government at the Centre again.

"There were no issues in the alliance. Everything is alright. We will won election under Modiji's leadership," he said.

The seat sharing arrangement comes as a victory of sorts for the LJP, which had adopted an aggressive stance and was in no mood to compromise on its demands. The party had given an ultimatum to the BJP leadership to sort out the issue before December 31.

The agreement on the seats was finalised after several rounds of meetings and discussion among the allies.

Union Minister Arun Jaitley held discussions with Ram Vilas Paswan and his son Chirag Paswan on Friday a day after LJP leaders met Shah and shared their concerns over the delay in holding talks over the seat sharing issue.

Upendra Kushwaha-led Rashtriya Lok Samta Party (RLSP), now a constituent of the United Progressive Alliance, had won all three seats it contested as part of the NDA alliance then.

The JD-U had bagged only two seats.

The NDA will take on the UPA, which is led by Rashtriya Janata Dal. The Congress and Hindustani Awam Morcha led by former Chief Minister Jitan Ram Manjhi and the RLSP are its other constituents.