The death toll in rain-related incidents in Bihar reached 73

The death toll in rain-related incidents in Bihar increased to 73 on Thursday even as forces involved in relief and rescue operations fished out rotting corpses from water-logged areas in several places.

The torrential rain that occurred between September 27 and 30 has created flood-like situation in 15 districts of the state, including the state capital.

The state disaster management said that the death toll takes into account loss of lives caused by drowning, wall collapse, trees crushing people to death and electrocution of citizens trapped in water-logged areas.

The department was, however, unable to provide a district-wise break-up.

It is being presumed that Bhagalpur where the district administration has confirmed as many as 12 casualties, might have been the worst affected.

In Patna, normal life has come to a grinding halt in many parts of the city which have been water-logged for close to a week notwithstanding efforts being made by the district administration, along with the NDRF and the SDRF, to replenish stocks of food, medicines and drinking water of the stranded citizens.

Banks, shops, private hospitals and coaching institutes which abound in Kankar Bagh, Rajendra Nagar and Pataliputra Colony have been closed for a week.

The last time they could conduct normal business was on Friday when the downpour began late in the evening and continued for the next couple of days.

Many localities have been rid of inundation by now as sump houses have been working overtime and heavy-duty pumps have been brought in from Chhattisgarh to flush out the water with greater speed.

However, residents of these localities are faced with a fresh set of woes as tap water supplied by the municipal authorities and even submersible boring has got contaminated and is emitting foul smell, rendering it unfit for consumption. 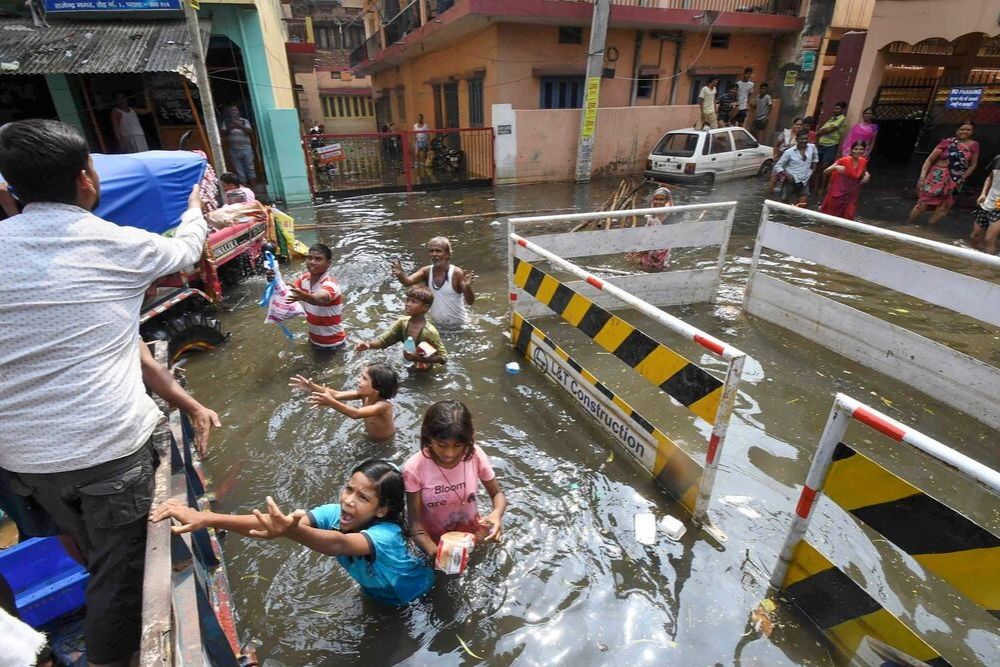 Complaints of the sort are flooding the helplines set up by the district administration as also its WhatsApp group where assurances have come from District Magistrate Kumar Ravi that remedial measures will be taken.

BJP MP Ram Kripal Yadav, who on Wednesday night fell into a shallow river while trying to reach a water-logged area in rural Patna, on Thursday accused the city administration of neglecting areas falling under his Pataliputra constituency.

"It seems the Patna administration cannot look beyond Kankarbagh and Rajendra Nagar. Water-logging has been there in Danapur but nobody seems to notice," said Yadav, who had been the deputy Mayor in 1980s.

Patna is divided into two Lok Sabha constituencies, the other being Patna Sahib, which is represented by Union minister Ravi Shankar Prasad.

Many citizens have become samaritans, inspired by the tragedy. One such instance being a 13-year-old girl Siddhi Shreya who came all the way from Samastipur to donate Rs 11,000 she had collected over the years and took out breaking open her piggy bank.

The money was received by former MP Rajesh Ranjan alias Pappu Yadav, who has earned plaudits for his efforts in the past few days, which include personally reaching out to stranded people with cash, food and drinking water aboard NDRF boats besides disbursement of sanitary pads by female volunteers of his Jan Adhikar Party.

"My child, you have proven that the rulers sitting in Delhi and Patna are dwarfs in front of you. You have demonstrated that a person’s stature depends on his or her character.

"I feel assured that things will change for the better when the future generation grows up," Yadav remarked movingly, sharing the episode on his official Twitter handle.