PM Modi's comment that there was no Chinese presence on Indian side of LAC pertained to situation following bravery of armed forces, the PMO said. 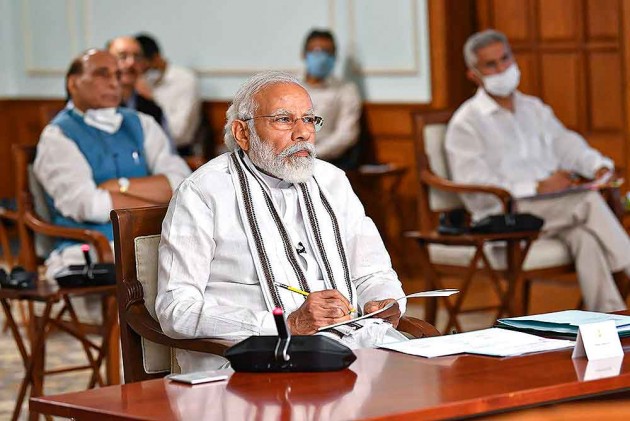 The Prime Minister's Office (PMO) issued a statement on Saturday saying attempts were being made to give a mischievous interpretation to remarks by the Prime Minister at the all-party meeting over Ladakh face-off.

The statement comes after the Congress raised questions over whether the government has "surrendered" Indian territory to China.

The PMO said, "Attempts are being made in some quarters to give a mischievous interpretation to remarks by the Prime Minister at the All-Party Meeting (APM) yesterday."

PM Modi's comment that there was no Chinese presence on Indian side of LAC pertained to situation following bravery of armed forces, the PMO said.

It further said, "At a time when our brave soldiers are defending our borders, it is unfortunate that an unnecessary controversy is being created to lower their morale."

Also Read | Was There Intelligence Failure On Situation With China, Sonia Asks Govt At All-party Meet

The statement reads: "Prime Minister was clear that India would respond firmly to any attempts to transgress the Line of Actual Control (LAC). In fact, he specifically emphasized that in contrast to the past neglect of such challenges, Indian forces now decisively counter any violations of LAC (“unhe rokte hain, unhe tokte hain”)."

"The APM was also informed that this time, Chinese forces have come in much larger strength to the LAC and that the Indian response is commensurate. As regards transgression of LAC, it was clearly stated that the violence in Galwan on 15 June arose because Chinese side was seeking to erect structures just across the LAC and refused to desist from such actions."

The sacrifices made by Indian soldiers foiled attempt of Chinese side to erect structures and also cleared attempted transgression in Galwan valley on June 15, the statement said.

It added that the words of prime minister that “those who tried to transgress our land were taught a befitting lesson by our brave sons of soil”, succinctly summed up the ethos and the values of our armed forces.

In a statement on the all-party meeting called by Modi on Friday to discuss the situation at the India-China border, the government said, "At the outset, prime minister clarified that neither is anyone inside our territory nor is any of our post captured."

The Congress on Saturday attacked Prime Minister Narendra Modi for his remark that neither is anyone inside India's territory nor has anyone captured its posts, with Rahul Gandhi accusing Modi of having "surrendered" Indian territory to Chinese aggression.

"PM has surrendered Indian territory to Chinese aggression. If the land was Chinese: Why were our soldiers killed? Where were they killed," he asked on Twitter, tagging the prime minister's remark.

A host of senior Congress leaders have hit out at the prime minister, asking if there is no intrusion what is the fuss about and why flag meetings for de-escalation of borders are being held.

The categorical statement by the prime minister came in the wake of reports that Chinese military has transgressed into the Indian side of the Line of Actual Control, the de-facto border, in several areas of eastern Ladakh including Pangong Tso and Galwan Valley.