Assam Polls: Every Clause Of Bodo Accord Will Be Implemented Within 2.5 Years, Says Amit Shah 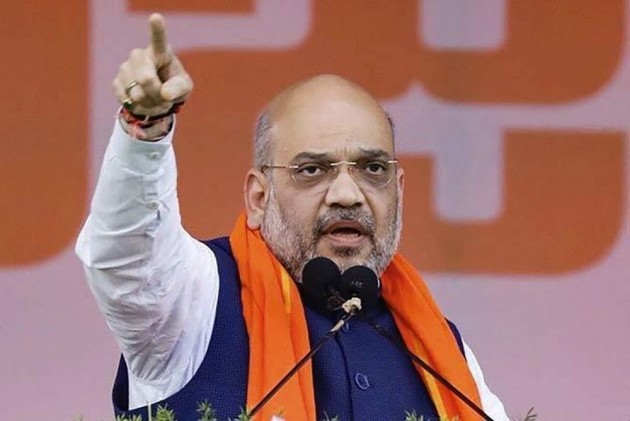 Promising to usher in peace and development in Assam, Union home minister Amit Shah on Monday said that all clauses of the Bodo Accord will be implemented within the next two-and-a-half years.

Shah made the comments while addressing an election rally in Assam’s Udalguri.

The home minister also urged Bodo youngsters to turn to the computer instead of turning towards guns.

“Instead of picking up guns (Bodo youth) must use the computer to compete globally and instead of using hand grenades, they should contribute to developing the nation,'' Shah said.

He also said that every promise made in the Bodo Accord will be fulfilled.

''Each promise made by the central and state government in the Bodo Accord will be fulfilled and all clauses implemented within two-and-a-half years. We want peace and development in Bodo areas'', Shah said.

The Prime Minister is always concerned about Assam's development and that of the Bodoland Territorial Region, Shah said adding, “It is due to his (Modi’s) initiative that peace has prevailed in the area. During Congress rule more than five thousand people were killed in violence in the Bodoland but Congress leaders 'rajniti ke roti sekte rahe' (kept baking their political bread).”

The centre has already announced a development package of Rs 5000 crore and out of this Rs 750 crore has already been sanctioned for 65 schemes for BTR while surrendered youths have been given Rs 4.5 lakh each so far. Bodo language too has been declared an associate language by the state government.

The Bodo Accord was signed in January 2020 between the centre, the state and Bodo organisations, including the four factions of the NDFB.

Taking a dig at Congress leader Rahul Gandhi's recent visit to the state, the Union Minister said that for Gandhi, “A visit to the state is like a picnic. He came and met the tea garden workers. For four generations, they did nothing for them but now they are talking about increasing their wages.”

It is the BJP government which has taken several steps for their welfare which include providing financial help to pregnant workers, nutrition, opening bank accounts for them, and during the last five years, their wages have been increased 2.5 times while Rs 1000 crore has been allocated separately for their welfare in this year's Union budget, the BJP leader said.

Earlier, addressing an election rally at Majuli from where Chief Minister Sarbananda Sonowal is contesting, Shah asserted only BJP could free Assam from infiltration, insurgency and floods.

He accused the Congress of entering into an alliance with the AIUDF who ''all know bring in infiltrators for their vested interests. Rahul Gandhi talks of protecting Assam's 'asmita' (pride and identity) but today I want  to ask him publicly - will Congress be able to do it with AIUDF Chief Badruddin Ajmal on his lap'', he asked.

If by any chance Ajmal comes to power, 'will Assam be safe from infiltrators. Do the people of the state want more infiltrators to come in the state'', he wanted to know. Shah said that he had recently visited the birthplace of Srimanta Sankardeva at Borduwa, where the land had been encroached upon by infiltrators during the Congress rule.

"I had asked the officials where my helicopter would land and they said at the place where the encroachers once lived.  I was surprised that there was not a single encroacher (now) and this has been possible in the last five years under the Sarbananda  Sonowal government in the state," he said.

The Congress had not spared the holy land where the neo- Vaishnav saint was born, but the BJP is committed to take his message across the country.

The BJP government in the state has taken a major step to protect the religious institutions of the state by giving grants for the infrastructural development of 'namghars' which  were more than 50 years old, he said.

He alleged that in the famous Kaziranga forests, the Congress and AIUDF had patronised both encroachers and poachers, but the BJP government had ensured that encroachers were removed and poaching of rhinos stopped.

Shah also alleged that five years ago when Congress was in power, agitation, violence, bomb blasts, deaths and curfews were common. "Aatankwad ka nanga naach charo aur chal rahi thi (the naked dance of insurgency was going on all around)".

"In 2016, I had come to you as the party president promising that if the BJP forms the government in the state we will make it 'aatankwad' (insurgency), 'ghuspetia' (infiltrators), 'andolan' (agitation) and curfew 'mukt' (free).

"Today, I have come to tell you that the Sonowal-led BJP government has done that and taken the state on the path of development," Shah said.

During the 15 years of Congress rule, there were different insurgent outfits in the state. However, during the last five years more than two thousand insurgents have surrendered and the Bodo Accord signed with different factions of the NDFB bringing permanent peace in the Bodoland Territorial Region, he claimed.

He also accused the Congress of creating  a rift between Assamese and Bengalis, plains and hills and Upper and Lower Assam. While the "BJP has taken all smaller communities together and bonded them through development," Shah claimed. Referring to Majuli, Shah said that after 70 years of Independence, it was the Sonowal government that declared it a district and for the first time held a cabinet meeting there.

The prime minister had on February 18 announced a series of projects and schemes for the river island, including a Rs 700-crore bridge over the Brahmaputra to connect Jorhat and Majuli.

"Earlier, Majuli could be reached only by the river- route but recently Sonowal inaugurated a heliport here and now it can be reached by air and waterways while in a few years, it will be possible by road too," Shah added.

He also said the prime minister has initiated a project to make Assam flood-free through satellite mapping and creation of water-bodies to store flood waters. Shah said within the next five years, the state would be made flood- free.