One year after Hathras, father of Dalit woman refuses to immerse ashes in Ganga till accused are ‘hanged’. Living in fear and waiting for justice, family of gangrape-murder victim expresses dismay over 'slow pace' of court proceedings 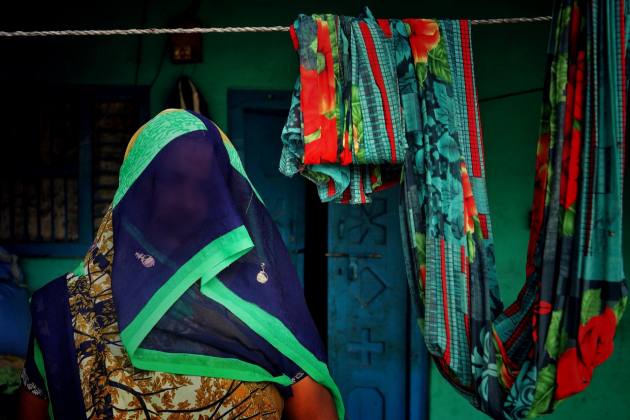 A green-and-red saree hangs from a rope tied to two pillars on the veranda of the house. It has been hanging there for the past one year, a stark reminder of a day when the world came crashing down on this Dalit family in Bulgarhi village of Hathras district in Uttar Pradesh. Gun-toting CRPF personnel stand on guard under a plastic sheet pulled taut over bamboo poles, questioning and frisking any ‘stranger’ who wants to pass through the alley to the house of the 19-year-old woman who was gang-raped and killed, allegedly by four upper-caste men of the same village.

A year after the brutal incident numbed the country and put the spotlight back on atrocities faced by lower caste people, the nine-member family of the woman are still trying to put their lives together. And waiting for a fair trial. “When will we get justice?” asks the 52-year-old father of the victim. He cannot be named due to the Supreme Court order which has prohibited the media to publish family members' names, photographs and videos.

The woman died at the Safdarjung Hospital in Delhi on September 29, a fortnight after she was brutalised in a field where she was collecting fodder for the family’s cattle. Even as the family was grappling with the shock of the woman’s death, local police cremated her body the same night, allegedly without informing her kin, sparking nationwide outrage over the insensitive handling of the case. Subsequently, the case was handed over to the Central Bureau of Investigation (CBI). All four accused are in jail.

At the courtyard of the house, the distraught parents spoke about the “delay” in the hearing of the case at an SC/CT court in Hathras. Pointing to an earthen pitcher containing his daughter’s ashes, the father says that he would not immerse them in the Ganga till the guilty “are hanged”. According to Hindu custom, immersing the ashes of a dead person in the Ganga helps the soul achieve salvation. “We will not immerse the ashes in the Ganga till the time we get justice. We want all the accused to be hanged to death for their heinous crime,” the father adds, as he chokes on his words.

The victim’s eldest brother, 29, too expressed frustration at what he felt was a delay in wrapping up the court hearings in the case. “At present, witness examination is going on and my statement is being recorded. The witnesses who will appear in the defence of the four accused are yet to be produced and cross-examined. The delay in getting justice is quite frustrating,” he says.

The woman’s mother points out that she was wearing the saree hanging on the rope the day her daughter succumbed to her injuries at the hospital. As much as they try, the traumatic past and memories of the loved daughter remain everywhere. Like the tulsi plant the victim had planted at the courtyard.

The present is another struggle altogether. Like the alleged threat to the family from the upper castes who are a majority in the village, about 380 km from state capital Lucknow. The CRPF contingent, deployed at the orders of the court, frisked this reporter and Outlook’s photographer before letting them in.

Social activist Yogita Bhayana, who was present at the victim’s family house when the Outlook team reached, says that the family is still scared. “I still remember that the girl’s younger brother was reluctant to go collect the ashes from the place where the police had cremated her as he was feeling extremely insecure… he said the villagers would beat him. I accompanied and told him that no one would dare to do anything to you.”

The incident had once again exposed the stark reality of India’s social hierarchy where the so-called lower castes constantly face physical and mental trauma at the hands of the powerful people belonging to the upper castes. Dalit and other lower caste women are vulnerable to exploitation at the hands of the dominant upper castes, and sexual assaults are often reported from across the country. Dalit scholars also say that the justice system is skewed in favour of the upper castes.

The family says that despite so much media coverage and national attention in their case, there has been no let down in cases of rape and violence against Dalit women. “There are at least three such cases that took place in other villages in the district in a span of one year since my sister met a cruel end,” the brother says.

However, not all lower caste family in the village agree to the allegation of exploitation. Besides four joint families of the victim, there are three more families of a backward class in this village with 70-odd houses with a population over 600.

“It is true that we are untouchables and the upper caste people don’t take anything from us but it is incorrect to say that our women are under threat all the time whenever they go out,” says a villager of a backward class. “People of criminal mentality are everywhere and it has nothing to do with upper and lower caste,” he adds.

Outlook tried to speak to the family of the accused but they refused to comment on the case. “Go to the victim’s family. They have money. You will get something from them. Why are you coming to us? We have nothing to offer,” says a woman outside the house of one of the accused. She refused to give her name.