As Labourers Return To Cities, Is Govt Ready To Avoid Future Migrant Crisis?

As the business and workplaces open up after months of lockdown, migrant workers are gradually heading towards cities in search of livelihood. To avoid the repetition of the migrant crisis the nation witnessed in the beginning of the lockdown, has the government thought out any strategy? 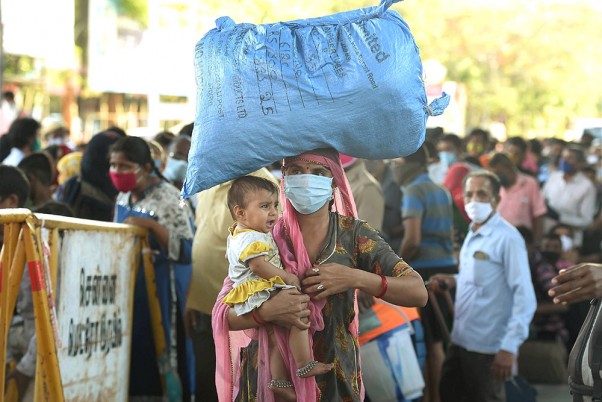 The images of lakhs of migrant workers stranded on highways or walking back to their villages during Coronavirus-induced lockdown still haunt many of us. Several migrants could not make it to their homes. Despite all those distressing images, the main learnings from that crisis are perhaps still going unnoticed.

With businesses and life gradually ‘unlocking’, migrants have also started to return to their workplaces. However, there is no process for registration of migrants or the safety standards that could ensure the crisis is not repeated. While it is a question of survival for the migrant workers, it is time the governments should rise to the occasion to ensure they do not suffer again.

Danara Kalari, 25 years old, from the village Koilari in Nabarangpur district of Odisha belongs to a backward community. He lives with his parents and two younger sisters. Though his father owns two acres, it does not provide for the entire year. Because he shares the responsibility to get his two sisters married, Danara migrated to Telengana where he worked as carpenter for 14 months. He managed to save Rs 5,000 every month. Due to the COVID-19 lockdown, everything was closed in Telangana. In April, he returned home along with his friends. Now Danara helps his parents with agricultural work. He says, “I don’t know much about agricultural work. If  the sovernment provides me any carpentry work in my district, I wouldn’t migrate outside. I would go back to work in Ranagreddy once the everything is normal.”

India has 45 million such economic migrants who leave their villages and go to the cities in search of work. As per Census 2011, the total number of internal migrants in the country (accounting for inter- and intra-state movement) is 139 million. Uttar Pradesh and Bihar are the biggest source states, followed closely by Madhya Pradesh, Punjab, Rajasthan, Uttarakhand, Jammu and Kashmir and West Bengal; the major destination states are Delhi, Maharashtra, Tamil Nadu, Gujarat, Andhra Pradesh, Odisha and Kerala. The conditions that these migrant workers live in the destination cities is abysmal and has no minimum health and basic amenities. The social security schemes including PDS are not accessed by these migrants due to the non portability of the schemes beyond their source states.

In a recently released survey by ActionAid, where over 11530 workers across 21 states were interviewed, we were able to cover 293 source and 393 destination districts. The findings were startling: 78% reported a loss of livelihood but more importantly, over 48 per cent of respondents were cheated and did not receive any wages after the lockdown and 17 per cent received partial wages. The conditions of housing are pitiable, and most workers lived with 6-10 people and 60% workers had to vacate their housing post Covid, primarily because of loss of livelihood. More than 50 per cent migrants reported that they were stranded for over a month, yet more than 70 per cent migrants said that they did not receive any transport assistance.

After coming home, 60% migrants have taken loans to pay for the family expenses and healthcare as for most of the workers the savings were not enough. For more than 80% of the workers, the food consumption was not sufficient and around 38 per cent of respondents said that their access to water was insufficient or barely sufficient. Only 28 percent of workers were able to access public healthcare during the lockdown.

However, the situation at home is not very bright. Hence, more than 56 per cent of people who migrate for work said that they want to return to their destination state when economic activity resumes, while 44 per cent wished to remain in their source districts.

Both for people who wish to go back and for the ones who want to stay in the villages, there needs to be specific measures to avoid such a catastrophe in future. Those who stay back need to have a good piece of land where they can cultivate crops and they need good access to the social security entitlements like PDS, Antodaya and so on, including MGNREGS. They need a comprehensive livelihood plan. There should be procurement of non-timber forest produce by government cooperatives on an urgent basis as many of the migrant families also depend on forests. Special agriculture credit and input support should be in place to engage the migrant workers in Kharif operations. Government should ensure selling of agriculture produce with fixed MSP, proper facility of storage and mandi.

For the people who want to go back, the government should put strict guidelines to avoid the crisis again. We need a thorough mapping of the returnee migrant workers and vulnerable left-behind family members. Those who wish to go back also need to register themselves under district administration in the source and destination districts. There should be proper contracts at the workplace and the employers should provide good quality housing support and should also commit to arrange for the travel back home at the end of the contract. There should be portability of the social security schemes, including PDS, especially for the people who travel with their families. There should be provisions for children to attend schools in the destination areas and they should not be treated as a workforce by the employer. The provisions in interstate migrants act should be strictly enforced in this case.

To avoid the repetition of the crisis faced by workers a few months back, there should be proper provisioning for food, shelter, travel and financial support with special focus on women, children and elderly. They should be given sufficient time to travel back to their homes with proper care. There should be special arrangements for children, adolescent boys and girls and women at the quarantine centres and stranded places of migrants to protect them from abuse, exploitation, and stigma. There is a need to reduce stigmatisation of homecoming migrant workers and their families by special initiative by the Panchayat, self-help groups, NGOs and the government. The migrant workers should be given employment and timely employment under MGNREGA. Migrant workers should be included under the State Building and Other Construction workers Welfare Board and make provision for financial support.

Let’s not push our workers -- who build the nation -- to the brink of despair and destitution again. Let’s come forward for our nation builders.

(The author works in ActionAid as an Associate Director. Views expressed are personal.)